Fifteen years ago, Mysterious Al was hosting illegal art parties with his friends in abandoned buildings in London.

"No galleries wanted to show us, it was that simple," says the British artist, who now calls Melbourne home. "We'd find an old shop front in East London and nail all our work to it and have a party and give it [the work] away at the end of the night." 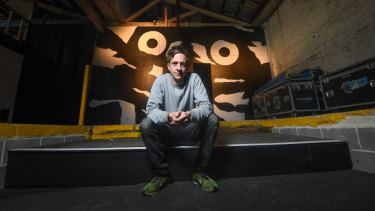 Mysterious Al in the foyer of his improvised art gallery in Collingwood.Credit:Justin McManus

In the spirit of fellow Melbourne artist Rone, who recently made over the spectacular Burnham Beeches mansion in the Dandenongs, he's secured a property slated for demolition in Collingwood and turned it into an immersive, pop-up art exhibition that will be open to the public for one weekend only from Friday night.

"My brief was I wanted an absolute shithole," Al says of the hangar-like building, formerly a marine supplies store and then a site office for a nearby construction project. 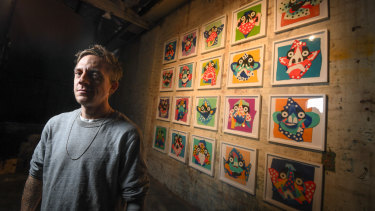 Al with the colourful collages on which he bases his paintings. All are for sale.Credit:Justin McManus

The space was full of debris when he and his team arrived but they repurposed the piles of discarded floorboards and cladding as building materials.

With some clever lighting and a fresh coat of paint, the custom-fit space unfolds as a series of interconnected rooms filled with paintings, collages, sculptures, projections and even a replica of the artist's studio.

In one small room they've piled up leftover debris – metal beams, cardboard boxes, wooden frames and discarded signage – and cordoned it off with rope. Above, a lone artwork hangs on the wall, framed in a clean, white square, suggesting a treasure salvaged from the ruins.

Most of Al's works begin life as hand-torn collages, inspired by the simple yet powerful designs of African tribal masks. He then digitally manipulates the playful "sketches" and "scales them up" into colourful oil paintings.

Most of the works on display in the pop-up gallery will be for sale, including 21 paper collages, which go for about a third of the price of Al's completed paintings at $800 each. 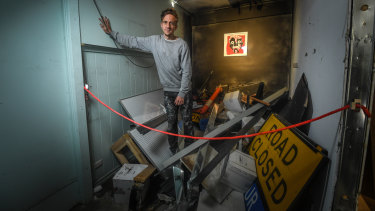 Once described in Britain as "part of street art's fabric", Mysterious Al says it's been immensely satisfying moving on from his roots.

"I did very stereotypical street art and graffiti for a long, long time and I got to a point where I felt a bit trapped by it," he says.

"For something that is supposed to be anarchic and free, there's actually a really fiercely defined set of rules [in the street art community] … and it's all about getting in and out as quickly as possible, even if you've got permission [to do the work].

"It's really nice to be able to put another layer of craft in, to really pore over something. It really adds something to the work."

Blinking into the Sunlight is at a secret location in Collingwood, Friday May 24 to Sunday May 26. Details to be revealed at mysteriousal.com or instagram.com/mysteriousal.