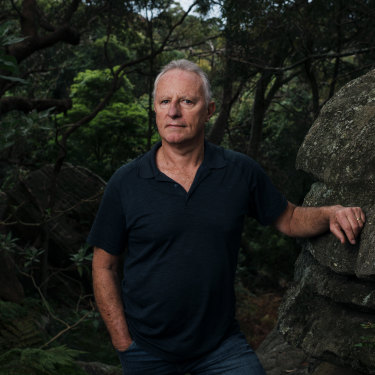 Greg Mullins near his home in Cromer.Credit:James Brickwood

Every government, whether the Liberal or Labor persuasion, swashbuckling or supine, is terrified by its revenants: the ones who return to haunt them over their past failings.

As in folklore where revenants return from a long absence or even the dead to warn the living, so former NSW fire chief Greg Mullins is re-emerging on to the public stage.

And arguably, Mullins and others like him are the modern parallels: initially ignored, shunned or shut down, only to re-emerge animated by restless and undeniable energy. His message: we need to move on climate change now.

The warning is simple: forget about global warming being a hoax because if you thought the 2019-2020 Black Summer fires were bad, wait until the next El Niño-driven mega-blaze arrives. 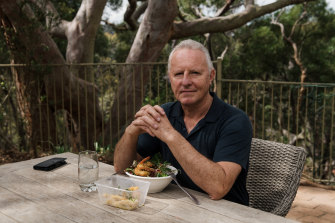 Mullins, 62, is glowing with health on my screen, nothing unhealthy or ghostly about his outlook, as we share lunch to discuss online his new book out next week: Firestorm.

Just in time for the next Australian bushfire season, the book is his personal frontline reportage from the climate change-driven fire disasters that destroyed lives, razed millions of hectares and burnt rural hamlets to ghost towns.

In early 2019, the bushfire fighter tried to warn federal and state governments that a terrible summer was imminent so that adequate preparations should be made. A former NSW Fire and Rescue commissioner who retired in early 2017, Mullins brought together a group of 22 former emergency services chiefs who jointly wrote to the Prime Minister, requesting a meeting to discuss the escalating climate change risks.

They called for a federal parliamentary inquiry into whether emergency services were adequately resourced to cope and called for funding for strategic national emergency management assets, like aircraft. 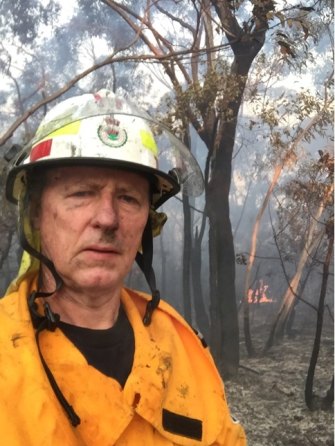 By late 2019, as the fire season took off as predicted, a pile-on of epic proportions ensued.

How did Mullins emerge from a traditional hierarchical fire fighting structure to become the kind of person who sounds the climate change alarm?

This is one of the many questions he answers over a seafood meal we share from afar. His from Dee Why’s SeaChange Cafe, which he eats in his bushy backyard in Cromer on Sydney’s Northern Beaches, me in the inner west with food from Fich at Petersham.

Mullins has opted for the coconut-crusted prawns and calamari salad, and I have chosen the seafood hot platter, a mixture of grilled and battered fish, mussels, squid, calamari and chips. Clearly wood-fired pizza wouldn’t be appropriate today.

Back in 2019, the Murdoch press attacked the group, erroneously claiming Mullins and former Queensland Fire and Emergency Services Commissioner Lee Johnson were merely “urban firefighters” with no background in bushfire fighting – an easily refuted assertion given the decades of fighting bushfires the group had between them. One media personality loudly complained that the former fire chiefs were commenting outside their area of expertise, about an alleged relationship between bushfires and climate change.

The fires worsened. Politicians weighed in.

The Deputy Prime Minister Michael McCormack dismissed the former fire chiefs as “time wasters”, adding suggestions that climate change was a factor in the fires were “the ravings of some pure, enlightened and woke capital city greenies”.

NSW Deputy Premier John Barilaro said that anybody who spoke about climate change during a bushfire crisis was a “bloody disgrace”. NSW Premier Gladys Berejiklian weighed in and said that it “wasn’t the time” to discuss climate change.

Mullins says the former fire chiefs took it upon themselves to absorb the criticism that raising these concerns would generate. The group deliberately did not recruit current fire chiefs who would be fully engaged with the unfolding disaster. However, he reveals that they were briefed before and during the campaign.

“It’s an uncomfortable spot to be in, where you’re a public servant speaking up about something that can be directly contradicting what a premier or prime minister or minister has said.

“So, I think we gave some space for a few of these chiefs to actually come out and do that,” he says.

Prime Minister Scott Morrison refused to meet Mullins and instead headed to Hawaii for holidays. The group of fire chiefs was handballed down the line of a succession of ministers and eventually staffers who hedged, hemmed and hawed, trying to bury them under government minutiae and avoidance. 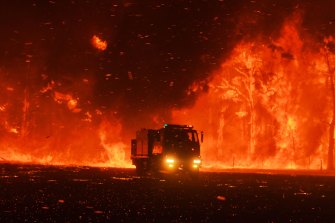 Scientists have measured how the Australian bushfires altered the Earth’s climate. Credit:Nick Moir

Yet, the public refused to stop listening; the former fire chiefs becoming their voice.

At the age of 12, Greg Mullins followed his beloved father Jack into fighting bushfires around the northern beaches, much to the consternation of mum Pat, who worried that her son was too young. 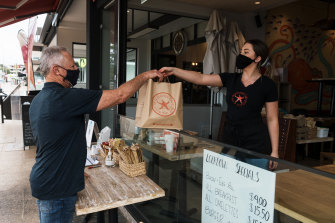 Greg Mullins takes delivery of his take away from Seachange Cafe in Dee Why. Credit:James Brickwood

His first major fires were around his Terrey Hills home and then the Blue Mountains, and eventually, he helped coordinate assistance sent across most of Australia for decades, as well as studying bushfires in Europe, Canada and the US.

As a career firefighter, he ascended to become Commissioner of one of the world’s largest fire services, Fire and Rescue NSW, for nearly 14 years. When it came to natural disasters, there was little, if anything, he hadn’t witnessed first-hand. 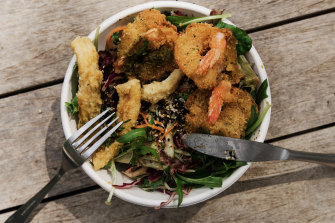 Over five decades he watched as weather patterns and natural disaster risks changed, seeing bushfires becoming bigger, hotter and more destructive. After the 1994 bushfires he began to talk with scientists and weighed their evidence with his experience, coming to the realisation that man-made global warming was setting the stage for a deadly firestorm.

“I’d look at the misinformation and the lack of knowledge out there about bushfires and how it’s changed, and I was just so frustrated,” he said. 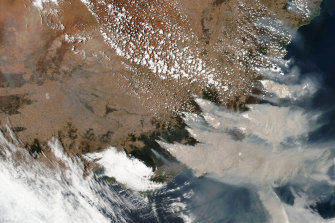 A January 4 satellite image from NASA shows smoke from the Black Summer fires in Victoria and NSW. If they had been their own country, they would have been one of the world’s top emitters.Credit:NASA/AP

“But I knew as a firefighter that everyone wants to know why. They had suffered a major loss and want to know what the hell happened and why.

“I thought it was really important for people who had been on the frontline and who are trusted – and firefighters are trusted in the community – to tell the truth. It’s tough to tell the truth and get the message out there that climate change isn’t something in the future, it’s happening right now, and it’s dangerous, and it can only get worse.”

‘I knew as a firefighter that everyone wants to know why. They had suffered a major loss and want to know what the hell happened and why.’

But why face down a prime minister or premier? Why bring out a book now?

Mullins says he was raised that way. Plus, his retirement as a commissioner allowed him to find his voice.

In his book, he recounts travelling to his first fire with his father. His brother Terry’s best friend Geoff Carr and sister Jenny were in trouble with their parents away and fire bearing down on the family home, on the western edge of Duffys Forest adjoining Ku-ring-gai Chase National Park. The house was surrounded by bush at the top of a steep, wooded slope facing west.

It was about a 10-minute drive to Geoff’s house. In the family Hillman Hunter station wagon, Jack Mullins and his son approached the boundary between Terrey Hills and Duffys Forest when a police roadblock pulled them up.

“Dad drove up to the roadblock as everyone else went the other way. The officer waved dismissively at us to go back the way we’d come,” Mullins says. “We were now much closer to the fire and I could see the huge brown, black and white smoke column twisting and ‘boiling’ into the sky, the smell of smoke now very strong.

“Dad stepped out of the car and got uncharacteristically heated when the young policeman wouldn’t listen and wouldn’t let us through. 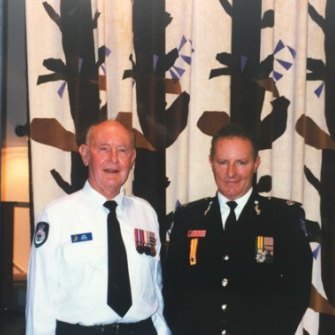 “My dad spoke to the officer, ‘Listen, son, when you’ve got time, go and read the bloody law. I’m a bushfire brigade officer, and you can’t stop me. I tell you what to do, not the other way around. You better get out of my bloody way because I’m heading for that’, pointing at the clouds of billowing smoke.

“I was a bit shocked seeing Dad get angry because he was always so even-tempered. He jumped back behind the wheel, gunned the engine, and shot past the officer and a couple of other cars … Dad by now seemed a bit sheepish and mumbled something like, ‘He got my Irish blood up’. There was a tacit agreement that I wouldn’t tell Mum.”

This might explain why Greg Mullins was happy to let that same Irish blood boil when it came to hosing down the misinformation and rhetoric from politicians in 2019.

Fires have been his life for 50 years. In 2018, also the year he joined the Climate Council, he was made an officer of the Order of Australia for his work. He says his wife Erris, a nurse, has been his supporter and confidant, even when he rushed off to leave their two children Phil and Kate and later daughter-in-law Andrea in the middle of family gatherings to fight blazes. His two grandsons Eamon and Oliver always get a kick out of seeing ‘Bop’ head off with flashing lights and sirens in the “wee-waa car”. 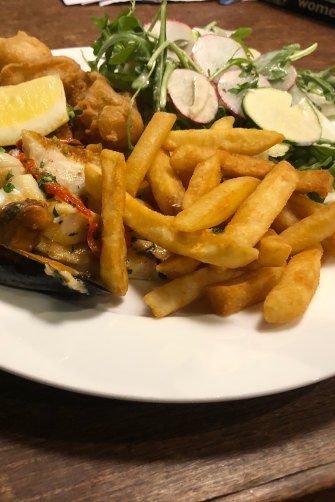 Fighting big fires is a humbling and frightening experience, Mullins says. The eucalyptus scented smoke turns acrid. A jumbo jet rumble of flames takes off. And the skin glows red, even under protective clothing, as if someone had shoved 50 bar heaters right in front of your face.

Since retirement, Mullins has rejoined the Duffys Forest Rural Fire Brigade, where he started in 1972, as a volunteer. 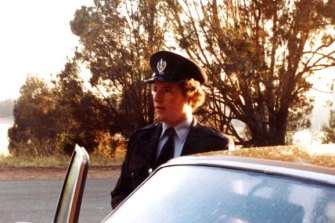 Greg Mullins as a young firefighter.

“Tony is a very good firefighter,” Mullins said. ” He is someone you want beside you, quite frankly. I’ve had people say, ‘How can you even speak to him?’ And my thing is there is too much hate in Australian politics. I think the personality politics some play is disgusting. And I don’t want to be part of that, having experienced it myself.”

The veteran firefighter hopes his book is a light bulb moment, shifting the mindset of curious mums and dads, grandmas, grandpas and even firefighters about climate change.

“I want people to read the book and put it down, and say, ‘I have seen that too … we need to take action’.” 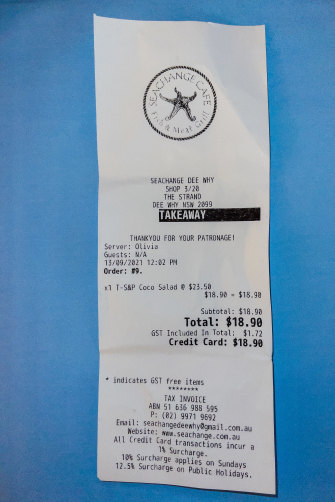 Receipt from Seachange cafe for lunch with Greg Mullins.Credit:James Brickwood.

Firestorm, published by Penguin is launched this Tuesday, September 28.