‘This is better than the real thing’: Food truck owner, 21, wows with his delicious homemade sausage and egg ‘McMuffin’ – and it’s been viewed more than 300,000 on TikTok

A young cook has wowed thousands after he shared his very simple recipe for an epic McDonald’s-inspired sausage and egg McMuffin. 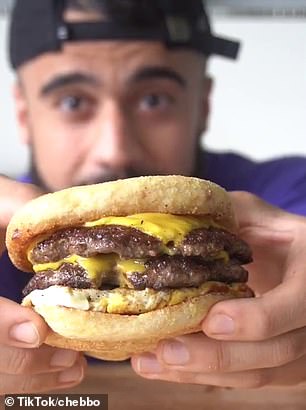 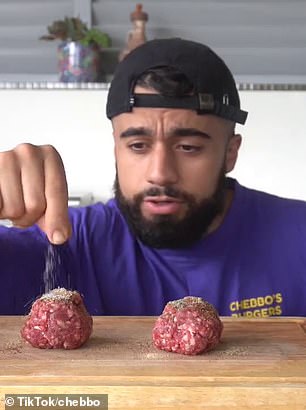 Ali Chebbani (pictured), from Sydney, has wowed thousands after he shared his very simple recipe for an epic McDonald’s-inspired sausage and egg McMuffin

The ingredients you need to make sausage and egg McMuffin

He started by shaping the ground mince into two round balls, before seasoning the outer layers with a seven spice blend, garlic powder, pepper, salt and sugar.

Ali, who calls himself Chebbo, suggested seasoning the patties with sage and thyme instead of the seven spice blend.

‘I ran out of sage and thyme which was why I used seven spice,’ he explained.

He then placed the balls in a cast iron pan over high heat, before using a smashed burger tool to press the meat into a flat patty shapes.

While the patties are sizzling, he buttered the muffins. To toast the bread, he placed them into the same pan with the patties.

Once the patties are brown on one side, he flipped them over.

Next, he cracked an egg into an egg ring. Then he used a spatula to ‘give the egg a mix in the ring’ to break up the yolk.

Chebbo then placed a slice of cheese on each patty while it’s still in the pan, and he removed it once the cheese has melted.

‘To assemble, he topped the bottom muffin with the fried egg, followed by the double patties with cheeses, and the top of muffin.

‘That’s it,’ Chebbo said as he took a big bite of his creation, adding: ‘It’s amazing.’

The video has since been viewed more than 300,000 times, with dozens saying they couldn’t wait to recreate the breakfast muffin at home.

‘That almost looks better than the original at Maccas,’ one wrote.

One chef pointed out in an amusing post: ‘You overcooked that egg to death, go easy bro, it ain’t even born yet,’ to which Chebbo responded: ‘Yeah, my bad, I lost track of time.’

Another man asked why he broke the egg yolk, to which Chebbo explained: ‘It’s how we did it at Maccas, grown used to it in muffins.’

A McDonald’s employee weighed in on the egg debate, saying: ‘It’s because we actually steam the eggs, not fry them and if the yolk isn’t broken, then it’ll be runny and annoy some Karens.’