See all the stars at the ‘Downton Abbey: A New Era’ premiere

The Crawley family is back on the silver screen in “Downton Abbey: A New Era,” out Wednesday.

And along with the film’s romance and drama come some stunning late-1920s fashions.

Anna Robbins, who has designed the cast’s costumes since the television series, returned for “A New Era” to dress the Dowager Countess, Lady Mary, Tom Branson, and other familiar favorites in a range of elaborate period clothing.

We first met the residents of “Downton Abbey” in 1912, with the characters’ wardrobes evolving as the years moved on to the ’20s.

Now, with the second flick taking place at the dawn of the ’30s, some bigger style changes are in store for the Crawleys and their staff.

From a Vogue-inspired wedding gown to the first-ever “Downton” swimsuit moment, we’re sharing a few of our favorite behind-the-scenes fashion facts from the set, below. 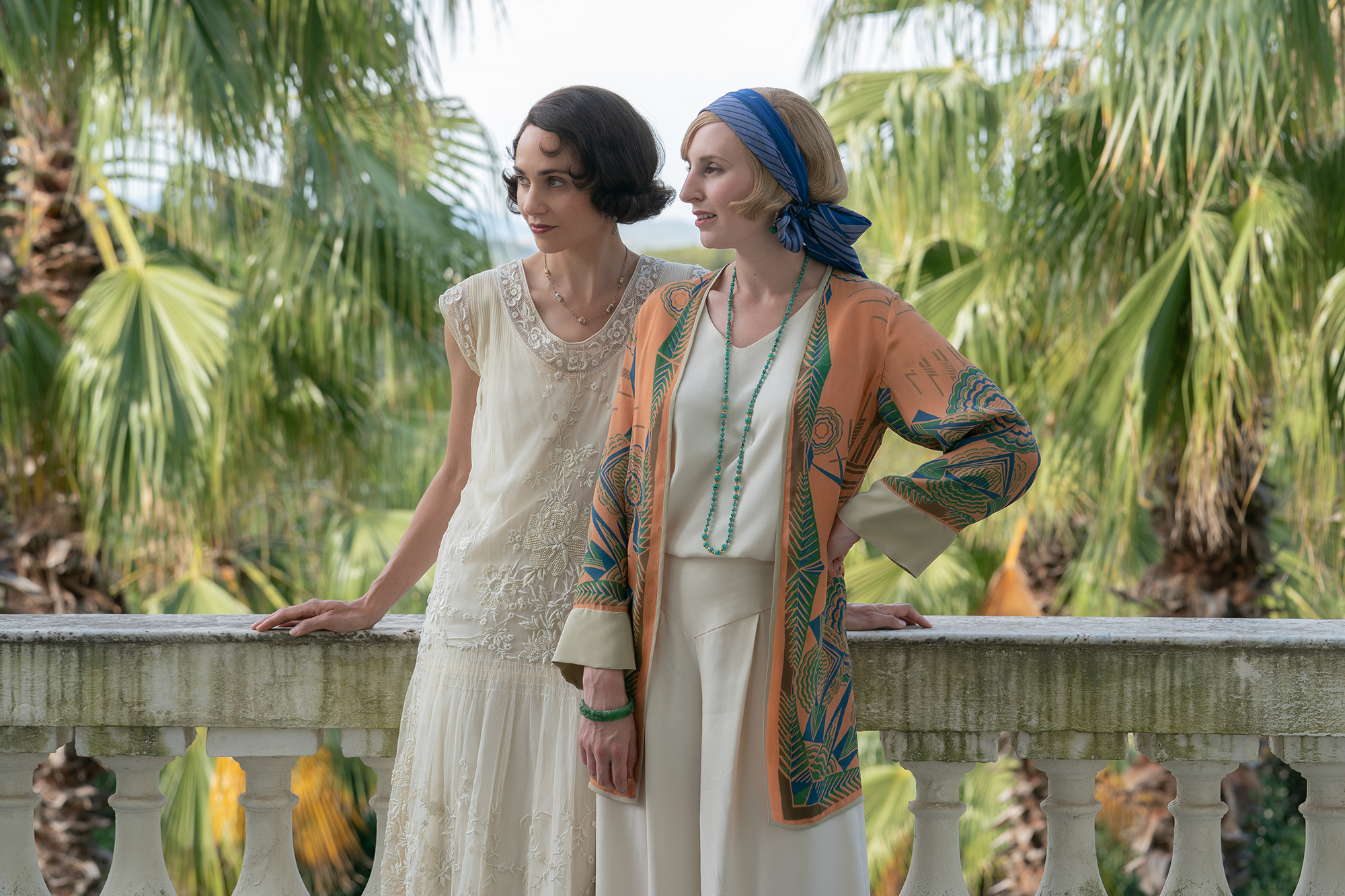 Although Lady Sybil (played by Jessica Brown Findlay) famously rocked a harem-style trouser outfit on the TV series, pants haven’t been a part of the Crawley ladies’ wardrobes … until now.

As the 1930s approached, many a modern woman like Edith (played by Laura Carmichael) started wearing trousers. Robbins delighted in sourcing just the right look for her style reveal, which she called “the perfect moment” in Hello! magazine‘s May 2 print issue.

“I found a beautiful pyjama set for Edith and we had her in trousers for the first time, which was glorious,” the costume designer said.

Robbins also shared with Digital Spy that the vintage kimono jacket Edith wears with her cream wide-legged pants inspired her to create the outfit.

“I knew as soon as I saw it I would be able to pair it with trousers and make that sartorial point that she’s embracing an incredible new look,” she said. 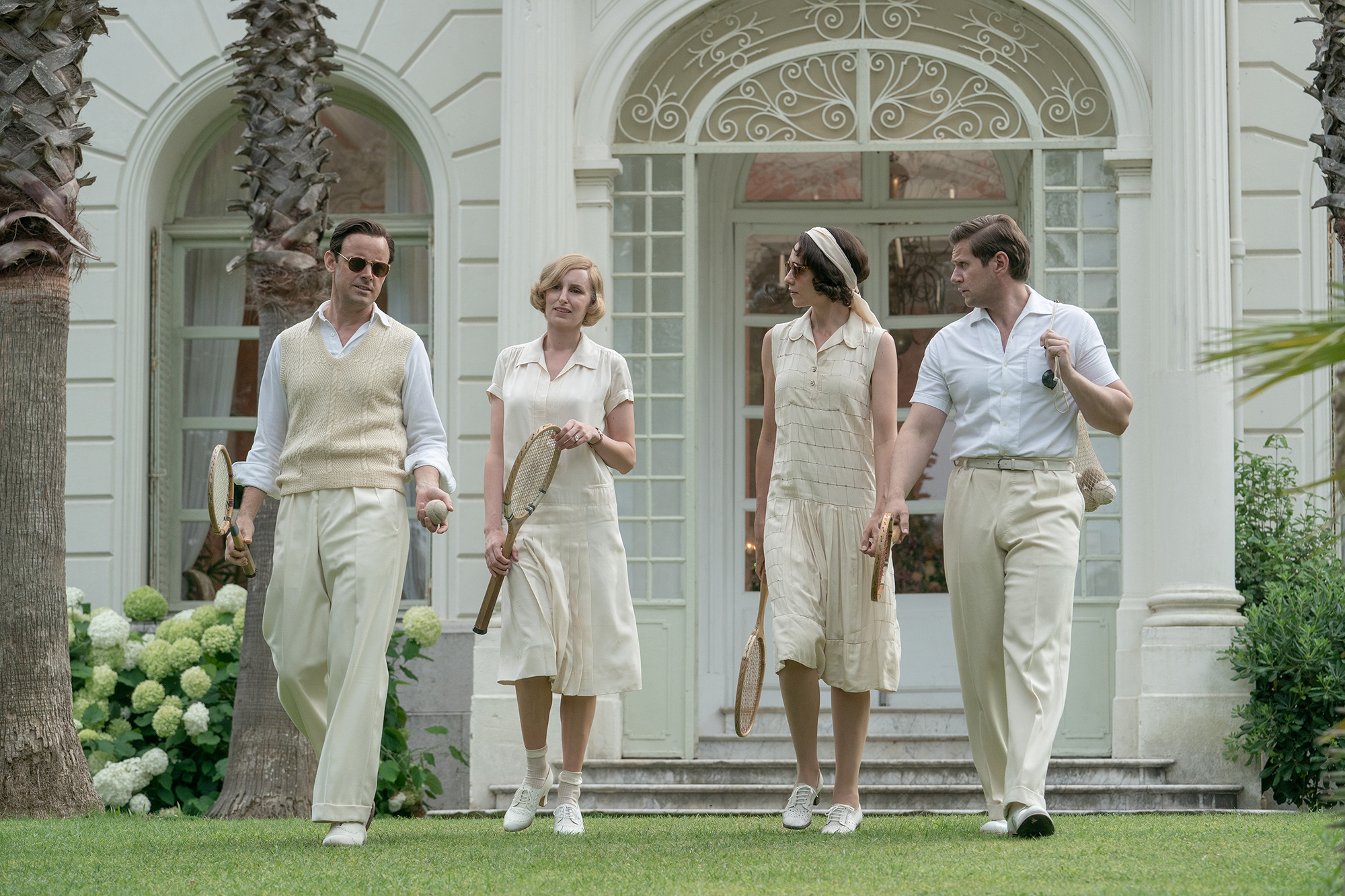 Although we’ve seen some beach scenes from “Downton Abbey” in the past — like the heartwarming moment when Mrs. Hughes and Carson waded into the ocean holding hands — we’ve actually never seen one of the characters wear a bathing suit.

In “A New Era,” the cast heads to the South of France for a summer holiday when the Dowager Countess (played by Dame Maggie Smith) inherits a Mediterranean estate — and that means swimsuits and sportswear.

“Tom goes swimming in the Med with Lucy in an all-in-one,” Robbins told Vogue UK of the franchise’s first swimsuit appearance.

The characters also don some sassy tennis looks, according to the costume designer.

“Sportswear exploded in the ’30s,” she said, adding, “You see Edith and Bertie, Lucy and Tom playing doubles together, and I found original pieces in a rich cream shade for the girls to wear for the match — contrasting beautifully with the green of the villa lawn.” 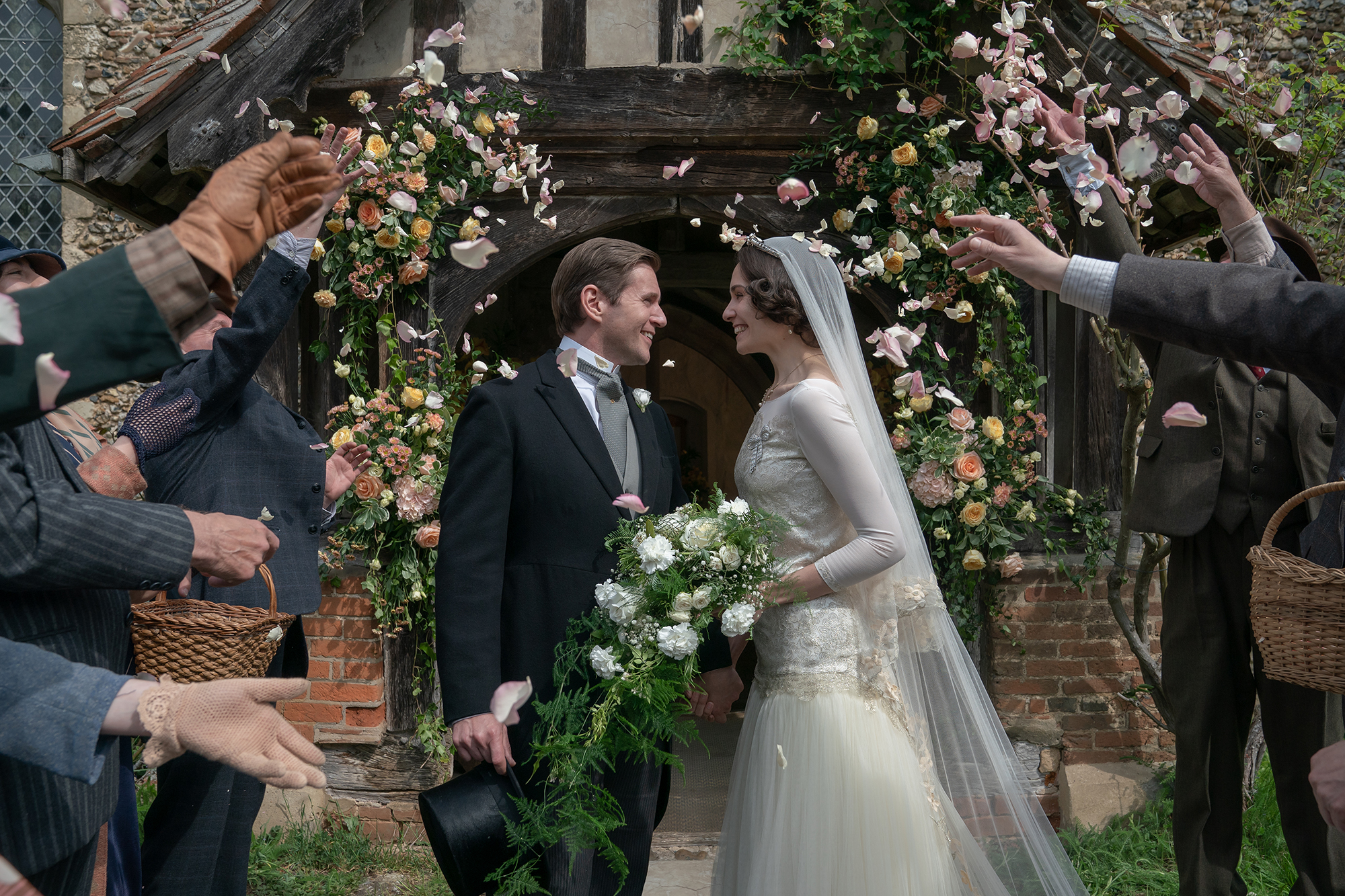 In “A New Era,” the new couple heads to the altar, and it turns out her gorgeous wedding dress was inspired by a vintage fashion glossy.

“When it came to designing Lucy’s wedding dress, I found a photograph in a ’20s copy of Vogue that I nearly exactly recreated,” Robbins told Vogue UK.

Featuring sheer three-quarter sleeves, a boat neck and silver thread embroidered in a flower pattern over a satin bodice, the drop-waisted gown would have been an extremely fashion-forward look for the time.

“I wanted to give the sense Lucy would be able to lift up her skirt and have a dance,” Robbins told Hello!, saying she wanted the gown to look different from the wedding dresses worn by the aristocratic “Downton” characters.

Although Lucy’s dress was made for her more fun-loving character, Robbins told Vogue UK the new Mrs. Branson’s vintage veil — topped with a pearl and diamond tiara — was “more elaborate than any of the others.” 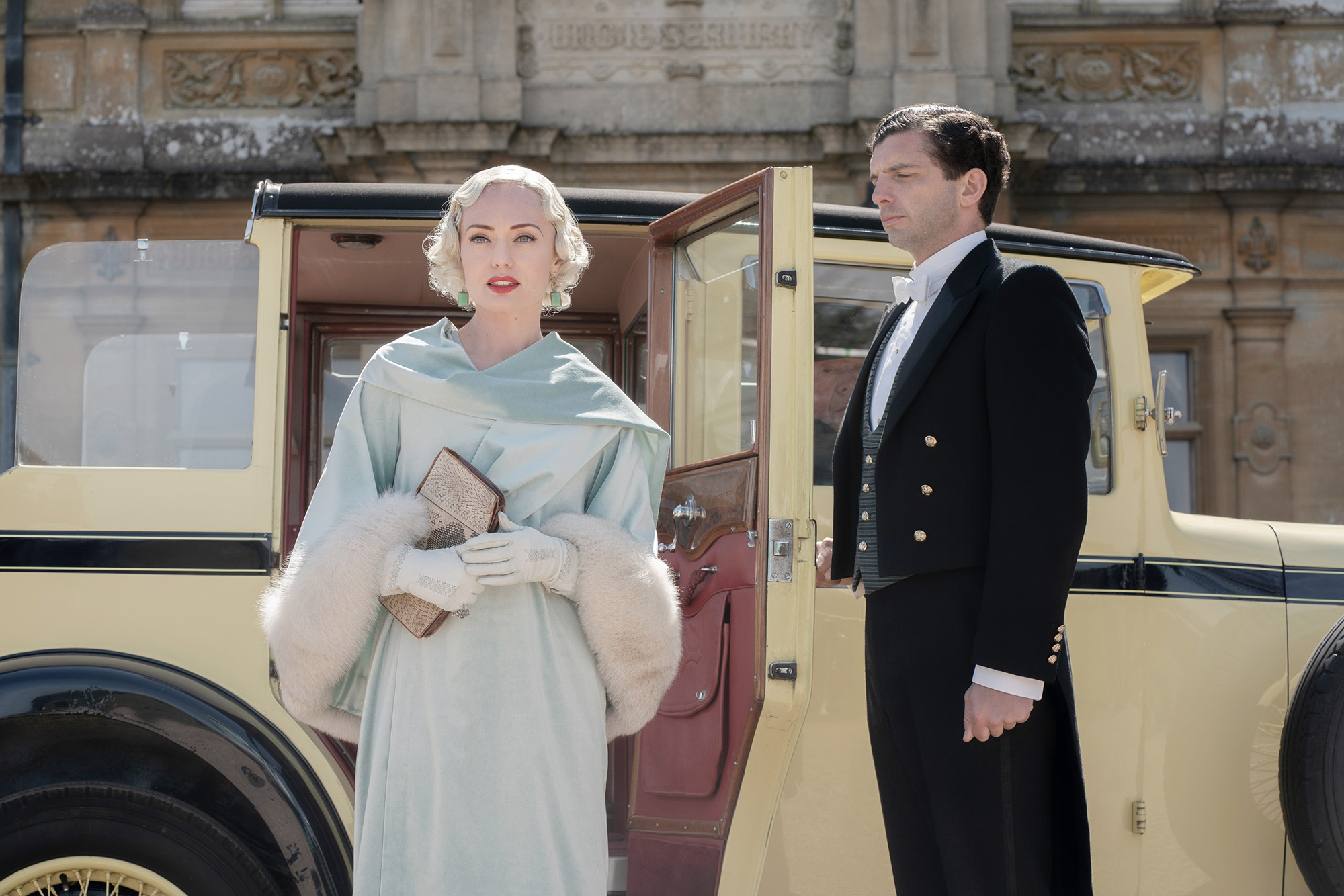 Moviegoers are treated to some “sumptuous, expensive designs” when the cast of a silent movie arrives to film at the Downton Abbey estate, and Robbins told Vogue UK she looked to Old Hollywood glamour for wardrobe inspiration.

“Myrna is inspired by the likes of Clara Bow and Louise Brooks, but I also looked at Greta Garbo, Gloria Swanson and Lillian Gish’s wardrobes when sourcing pieces for her,” she said, adding that fans should keep an eye out for “fur stoles and Art Deco jewelry.”

Laura Haddock, who plays silent film diva Myrna Dalgleish, told Radio Times that she did her own research into the stars of the era, adding, “Norma Talmadge was one that I was really kind of obsessing over.”

The movie stars’ Hollywood styles provide quite a contrast to the outfits worn by their Downton counterparts, Robbins said, and she sourced some authentic pieces from the time period, including a special pair of shoes for Myrna that had to be restored. 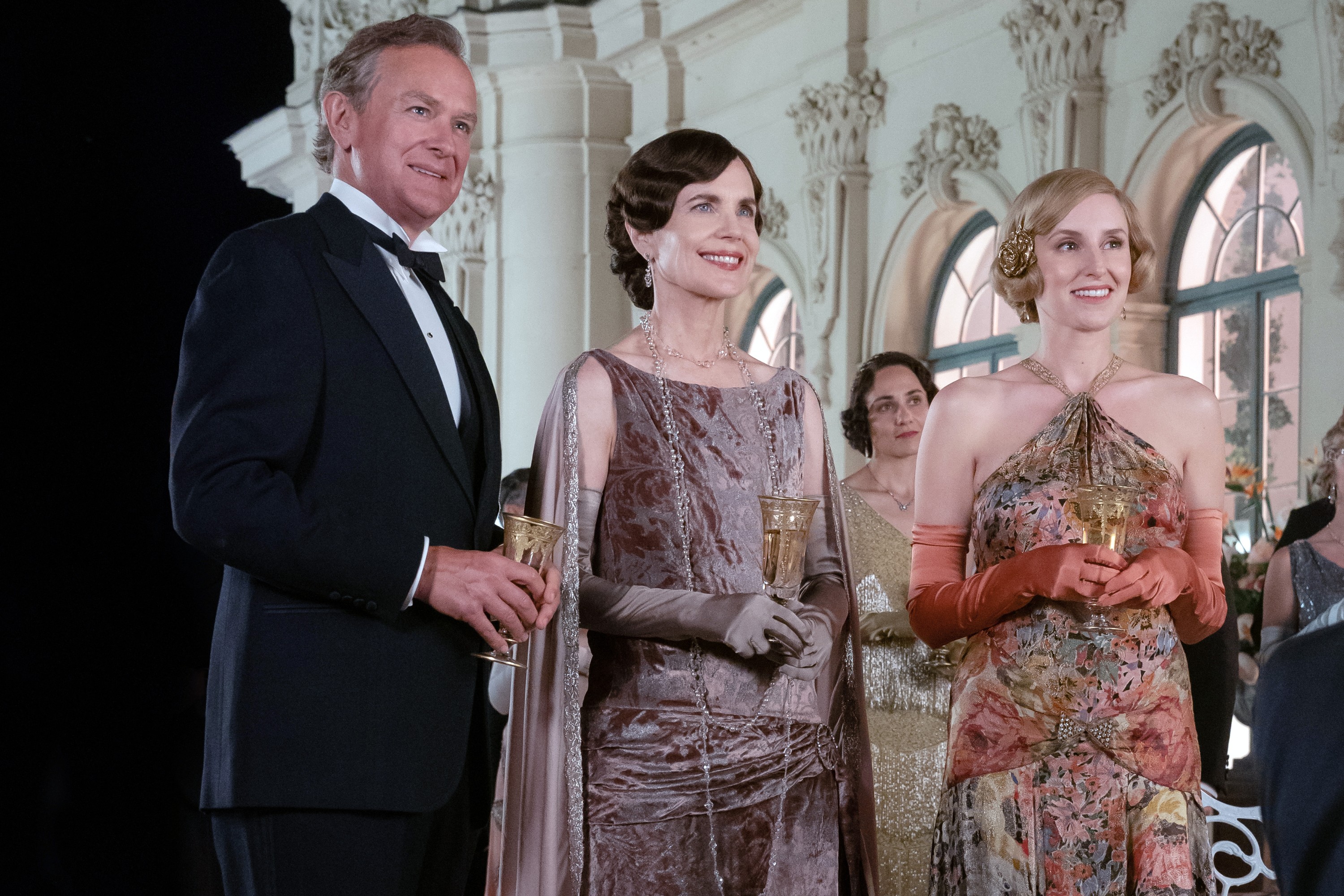 As the Crawleys travel to France, you’ll see their wardrobes shift from the deeper colors and heavier fabrics of a refined English estate to lighter, vacation-ready outfits.

“I studied a lot of photographs of Chanel in the South of France while designing the Crawleys’ slightly more relaxed holiday wardrobes,” Robbins told Vogue UK, adding that “Edith, in particular, embraces some of the more daring styles that were becoming popular.”

Along with trousers and athletic looks, expect shorter hemlines and the reintroduction of a more defined waist as the characters head toward the 1930s — and enjoy the Mediterranean sun.

“I’m always looking for authentic, original vintage pieces I can incorporate into costumes and the trip to France opened up a whole new array of pieces that would feel out of place in Downton, but which suited the French Riviera perfectly,” Robbins shared in Hello!

“Downton Abbey: A New Era” is in theaters now.