Travel between Victoria and Sydney will be strongly discouraged until the new year due to an escalating coronavirus outbreak in Sydney’s north, shattering thousands of festive plans and forcing Victorian authorities into full alert after almost 50 days without a local case.

The Andrews government has declared the northern beaches area a “red zone” and visitors from their who insist on entering Victoria will from midnight on Friday be forced into a 14-day, $3000 hotel quarantine stay.

The Sydney cluster grew by 10 to 28 people on Friday and Victorian Chief Health Officer Brett Sutton admitted he was concerned by the steep hike in cases since the first was diagnosed on Thursday. “We can and should expect additional cases to occur,” he said.

From the outbreak epicentre in Avalon in Sydney's coastal north, people unknowingly infected with the virus scattered across the city to Redfern near the CBD, Lane Cove, North Sydney, Bondi and Cronulla in the south east, out to Penrith and Riverstone in the west.

Victoria has not shut the border to NSW but Professor Sutton“strongly advised” Victorians not to travel to Sydney for the foreseeable future. He admitted the edict would likely stay in place for at least two weeks to assess the virus’ true spread through the city.

After 13 LATAM Chile crew members were each fined $1000 for breaking guidelines and leaving their Sydney hotel earlier this month, Victoria will join NSW in tightening protocols around international flight crews from next week – an apparent loophole in Australia’s tough border laws. 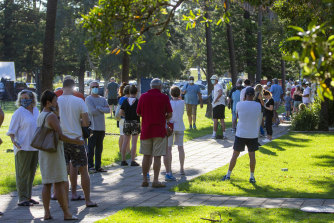 Sydneysiders line up for COVID-19 testing in Avalon on the Northern Beaches on Friday.Credit:Getty

A bus driver transporting flight crews in Sydney tested positive for COVID-19 earlier this week while earlier this month a cleaner in a Sydney hotel contracted the virus from a US airline crew.

A United Airlines crew member who arrived in Sydney with COVID-like symptoms on Monday was released from hotel quarantine within 24 hours despite a request from health authorities for more time to perform further testing.

Mr Weimar said while he was not aware of any flight crews breaching self-isolation guidelines in Melbourne, additional safeguards such as regular testing in their hotels could only be beneficial.

“For the environment we are in now with zero community transmission here in Victoria, we want to make absolutely sure they are doing the right thing and they’re supported to do so,” the testing chief said.

Professor James McCaw, an epidemiologist with Melbourne University who sits on the Australian Health Protection Principal Committee advisory panel, said reviews into managing flight crews had been underway for weeks but the LATAM Chile crew case showed the need for tightened protocols.

“Once you have this many cases, it won’t put itself out. The only way to get this down again is for there to be active case management, which NSW has shown it is very good at doing but we need to be wary,” he said.

NSW authorities are still investigating how the northern beaches cluster began. Genomic sequencing indicated the strain of coronavirus was imported from the US and showed similarities to a returned traveller earlier this month, although he remained in hotel quarantine for the duration of his infection. 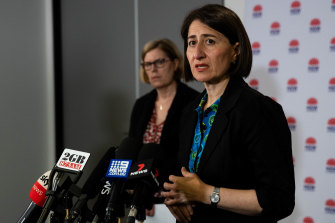 NSW Premier Gladys Berejiklian said the state had limited time to get on top of the outbreak in Sydney’s north.Credit:Janie Barrett

NSW Health has issued a strong advisory for those living in the northern beaches to wear a mask at all times, even when visiting indoor areas.

Premier Gladys Berejiklian strongly encouraged all Sydneysiders to wear masks on public transport and supermarkets but has not brought in citywide restrictions similar to the lockdown in Adelaide last month.

Instead, she urged northern beaches residents to stay at home for at least two more days.

“If we get on top of this in the next two or three days, all of us will be able to have a much better Christmas,” Ms Berejiklian said. 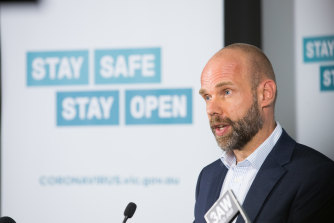 Prime Minister Scott Morrison said all the states and territories "have their own rules that they are putting in place, and they're seeking to protect the health and safety of people in their own jurisdictions."

He said he didn't have a "serious concern" that the new outbreak would hurt the nation's economic recovery.

Victoria Police will perform roaming checks on the NSW-Victoria border from midnight on Saturday, rather than a “ring of steel” at every access point.

Opposition Leader Michael O’Brien questioned whether the approach was due to a lack of police resources, with up to 300 police a day working in the state’s reset hotel quarantine program.

“A simple patrolling check is not something which gives Victorians a lot of confidence,” he said.

Professor Sutton confirmed a close contact linked with the northern beaches cluster is in Victoria.

The person, who voluntarily came forward to health authorities, is quarantining inside a hotel.

Mr Weimar encouraged the 18,000 people who have arrived in Melbourne from Sydney since December 11 to get tested. 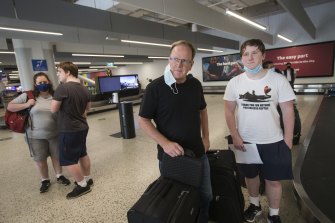 David Duncan with his son at Melbourne Airport on Friday morning. Credit:Paul Jeffers

At Melbourne Airport on Friday morning, passengers arriving on a Jetstar flight from Sydney were handed a brochure asking them to get tested if they feel unwell but there was no temperature testing.

David Duncan, 56, from Wahroonga in Sydney’s upper north shore said he felt lucky that the virus had not spread into his suburb.

“I think we’ve started to relax a bit, everyone’s dropping their guard," he said.

Ruth Mackinnon arrived in Melbourne from Seaforth on the northern beaches on Friday morning with her two children.

“You just want to do the right thing as well, so we’re just going to go home and isolate with our family in Melbourne."