After receiving the Hitmaker Award at Billboard Women in Music, Dolly Parton proved why she’s the hardest working woman in show biz by performing ‘9 to 5.’

Though many women were honored during the Billboard’s Women in Music Event on Dec. 10, there was one who stole the show: Dolly Parton. Only Dolly, 74, could receive the coveted Hitmaker award from her “fairy little goddaughter” – in this case, Miley Cyrus – dressed in a black turtleneck with a studded vest, adding her usual touch of country western flair. “I am proud of all the wonderful women in show business that write all of these wonderful songs,” Dolly said, and listed Cindy Walker and Loretta Linn as examples. Dolly also gave shout-outs to the newer generation of singer-songwriters, like Taylor Swift and Brandi Carlile.

Dolly then performed a rousing rendition of her 1980 classic, “9 to 5.” Dolly sang her hit song in a champagne-colored, sequined dress with fringe details, perfect for the holiday season (you can watch the performance, here).

Dolly was featured in Billboard’s 2020 Women In Music issue. “My guitar and my songwriting: That’s my therapy; that’s my doctors, my nurses, my medicine,” said Dolly. “I really think my music has saved me — and saved a lot of other people because I’m able to write the feelings of people who are broken and don’t know how to express it. I can do it for them, and it really seems to help. It is wonderful when you’re going through hurt to be able to write about it.”

The “Islands In The Stream” singer also shared her response when she first heard Whitney Houston’s version of her song, “I Will Always Love You.” Dolly said that when she first heard that “huge production with Whitney’s Voice, oh my gosh, who could even sing better than that?” Dolly also credited David Foster’s arrangement for giving the song a whole new life. “I would have never in a million years believed that my little heartfelt song could have turned into one of the biggest love songs of all time. I was never so proud in my life as a songwriter to think that my little song could be that good and that big.” 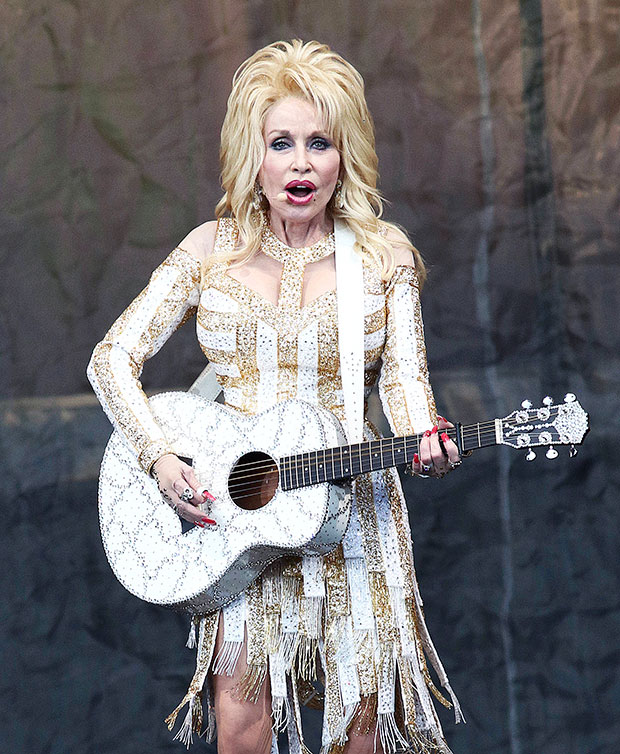 Dolly Parton has been all over 2020. She released A Holly Dolly Christmas. Dolly Parton: Here I Am hit Netflix, offering fans an intimate look at the music icon. She was the subject of an A&E Biography special, which showed her 9 to 5 costar Jane Fonda break down in tears over Dolly’s “extraordinary” impact. That impact also includes Moderna’s COVID-19 vaccine. Dolly Parton was credited as one of the major donors to Vanderbilt University Medical Center. “My longtime friend Dr. Naji Abumrad, who’s been involved in research at Vanderbilt for many years, informed me that they were making some exciting advancements towards the research of the coronavirus for a cure,” Dolly tweeted in April, per USA Today. So, Dolly donated $1 million to the research into a vaccine that is reportedly 94.5% effective against the virus.

While Dolly is out curing COVID-19, she’s also busy ending white supremacy. “Of course, Black lives matter. Do we think our little white asses are the only ones that matter? No!” Dolly said in an August interview with Billboard, following the Black Lives Matter protests over the killing of George Floyd. Dolly’s comment went viral.

“I don’t really realize it until it’s already said,” she told Billboard’s Women In Music issue. “I just answer from my heart when somebody asks me a direct question. I love everybody. And, of course, Black lives matter. We all matter. We’re all God’s children. I hope people learn to love one another a little more than they do, and if I can be any help in that respect, then I hope to be.”