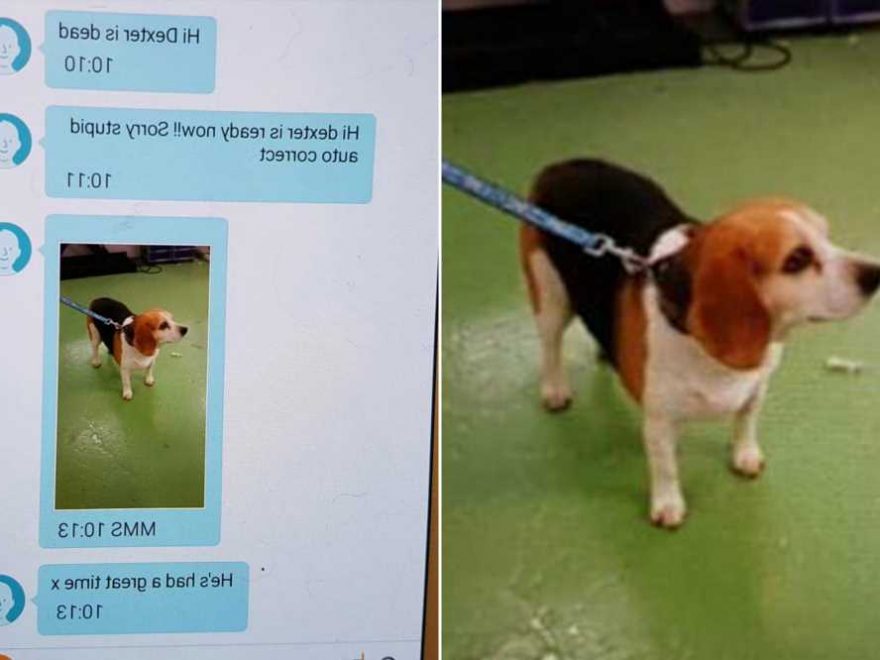 Man slipping on ice is a painfully funny fail

A dog owner feared the worst after an autocorrect fail resulted in them receiving a shockingly morbid text from their pet groomer.

An employee who works at the groomer uploaded a screenshot of the communication mishap with the unnamed pet owner on Reddit Tuesday with the caption, “Startlingly matter of fact message from the groomer.”

The pooch parent apparently dropped off their pet beagle, Dexter, at the groomer for an updated ‘do. Once Dexter was well-coifed, the pet specialist alerted his parent around 10 a.m., “Hi Dexter is dead.”

The rueful groomer also sent a photo of the owner’s newly sheared canine, presumably to prove that Dexter was, in fact, alive and well. “He’s had a great time,” they wrote in a follow-up message.

Go figure: Reddit had a field day with the autocorrect fiasco, with many joking that Dexter had indeed died and that the groomer was trying to throw the owner off the scent of the crime.

“That 3-minute taxidermy job has to be some kind of record,” quipped one macabre commenter about the apocryphal cover-up.

“Weekend at Beagles,” replied another, referencing the 1989 Ted Kotcheff comedy “Weekend at Bernie’s,” in which two ne’er-do-well workers are forced to pretend that their deceased employer is still living.

Thankfully, one dog lover put a more positive spin on the situation, writing: “Your dog is dead…………..tired after the wonderful day he’s had!”

This isn’t the first time a text editor fail has hilariously given someone the wrong impression. In December, a Wisconsin woman’s text to her father sparked a full-blown police investigation after it autocorrected to say she was being “stabbed” — instead of “swabbed” for COVID-19.