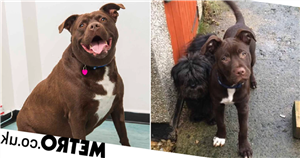 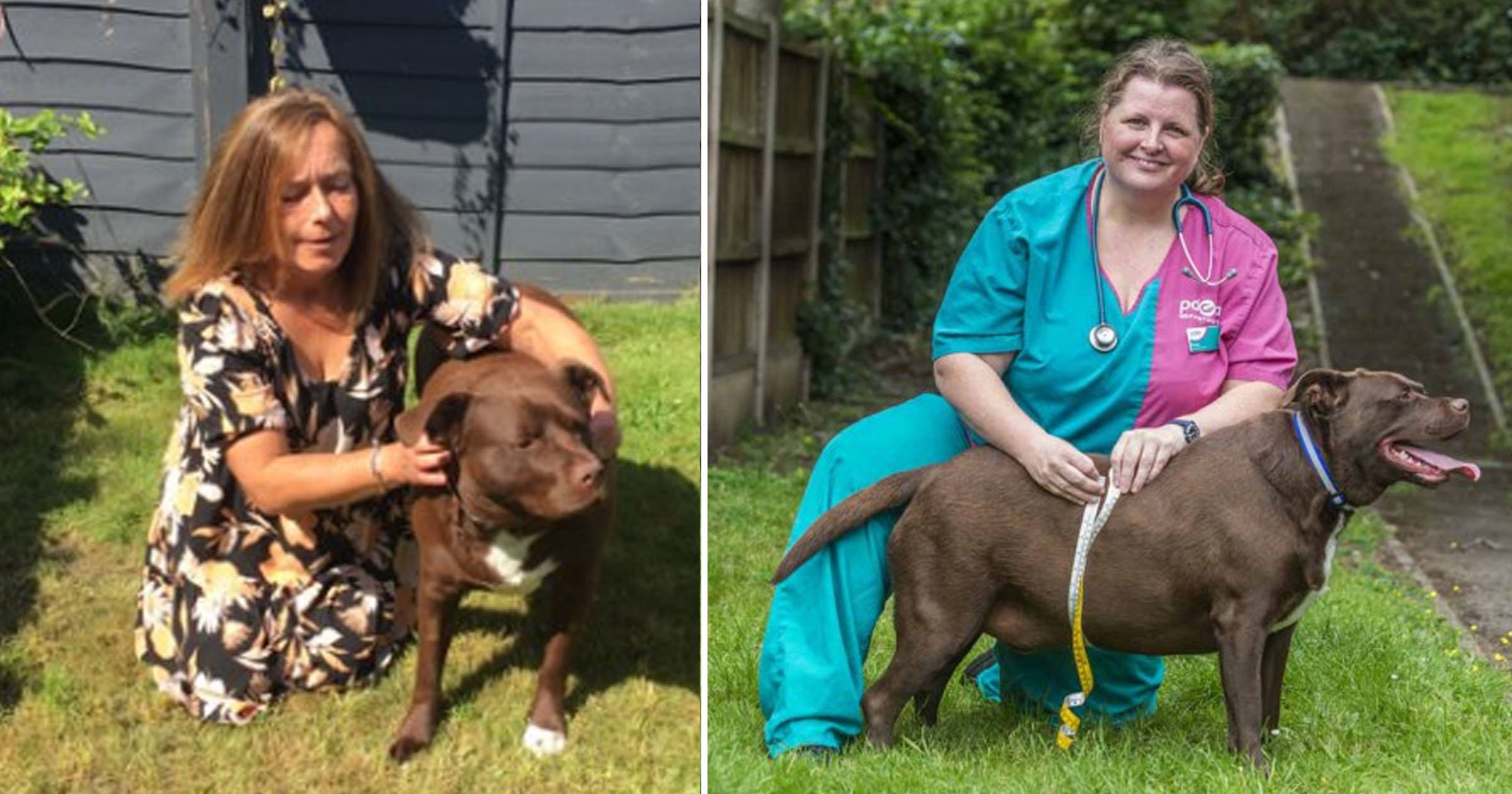 Dogs have experienced pandemic-related struggles, too.

Just look at Paolo, a five-year-old chocolate Labrador that has nearly doubled in weight over the past year – and now struggles to walk for more than 10 minutes at a time.

His owner Geraldine Cormack, 51, from Bristol, was horrified to discover that the pet she’s had since he was a puppy had seen such a decline in health.

The dog weighs 8st – 3st 4lb heavier than a healthy weight for a dog of his breed.

‘It’s been a combination of inactivity during lockdown and medication he is on to stop his seizures.

‘Either way, we need to get him back down to a healthy weight as it’s not good for him to be so big.’

Geraldine also has another dog, Gizmo, a ten-year-old Yorkie, who is a healthy weight, and says Paolo was a fit pup until 2020.

She said: ‘I’ve had Paolo since he was about 10 weeks and he’s always been lean and healthy but, over the last couple of years, there were a number of factors that led to his weight gain.

‘It just sort of crept on and I didn’t realise how bad it had become until I took him to the vets two weeks ago.’

Suffering with seizures, Paolo was put on medication in December 2019, which Geraldine says increased his appetite and, when the pandemic struck in March 2020, the mum struggled to take the dog on walks.

But lockdown put a stop to that.

‘I have my son to think about – Harley who has global developmental delay and had to shield during Covid,’ Geraldine explained.

‘And on top of that, I have my own health issues such as chronic obstructive pulmonary disease (COPD), which is a serious lung condition and leaves me constantly breathless when moving around, so I had to shield too.

‘Because of that, we couldn’t go out to take the dogs for a walk and that really affected Paolo’s weight.

‘We have a garden and Gizmo was very happy to race around there – he’s so small and has the mentality of a puppy so he didn’t gain weight.

‘But with his medication, Paolo didn’t want to move.

‘My sons were isolating with me so they couldn’t take him out for walks so there was nothing we could do.’

It was only when he visited the vets that Geraldine realised the extent of Paolo’s issue.

Professionals revealed that he was double the size he needed to be.

Paolo is now on a strict diet, with snacks banned. He’s also slowly starting to go on walks again – just 10 minutes every other day for now, until things become a bit easier.

So far, he’s lost 2lb, but will need to keep up that good work to get back to a healthy weight.

‘The only treat he gets is in the morning and evening,’ said Geraldine. ‘I give him the meat out of a sausage roll – his all-time favourite snack – and hide his tablets in it.

‘It’s the only way to get him to take his medication.

‘We live near a park, so we have been taking him there for walks. It’s heart-breaking because before the pandemic he’d be racing ahead, running laps around the park and playing with other dogs.

‘Now he walks very slowly and can’t go for longer than 10 minutes due to the excess weight he is carrying.

‘I just want my pup to be healthy and happy.

‘Plenty of us have put on a bit of extra weight during the lockdown months, and dogs are no exception.’

Geraldine and Paolo are being helped out by PDSA, who have put together a guide to help pets reach a healthy weight.

Penny Morgan, a PDSA vet, said: ‘Geraldine and Paolo’s story is sadly not uncommon and vet practices across the UK hear the same thing every week as obesity impacts the lives of millions of UK pets.

‘As veterinary professionals and as pet owners ourselves, we completely sympathise with the many owners who spent more time at home with their pets since the start of the pandemic.

‘It was only too easy to indulge them with extra treats and titbits, increasing the potential for weight gain.

‘And while pets with medical conditions like Paolo may have a more challenging weight-loss journey ahead, they can certainly achieve their goal, armed with expert advice, confidence and persistence.’