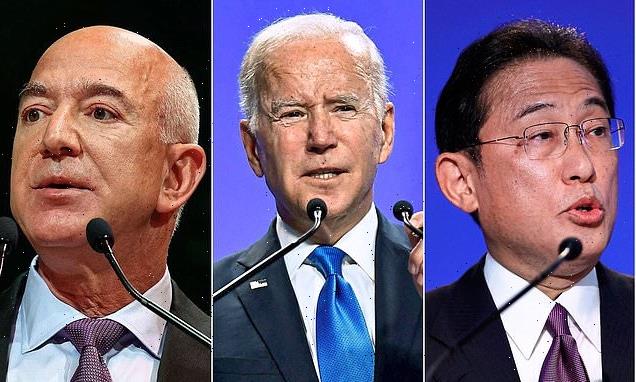 Thomas is disillusioned with COP26. ‘I’ve missed my chance,’ the Glaswegian barber tells me. ‘My friend rented his flat at two grand a week. He’s making £6,000 and using the money to jet off for a holiday.’

I’m in Easterhouse, a few miles from where the global elite are gathering to save the world from itself. But few of them have ventured out to what was once the most deprived housing estate in Scotland. ‘I’m not sure why,’ Angus, the local butcher, laughs. ‘Perhaps Joe Biden got lost on the M8.’

What does he think about calls for us all to go vegan to protect the planet? ‘Well, I’m a butcher,’ he replies. ‘And my dad was a butcher and my grandad was a butcher. I grew up on pig’s feet soup. So I think people round here are still going to want to eat meat.’

Angus’s views could be ascribed to self-interest. The same can’t be said for local cabbie Andy. He’s made a small fortune shuttling delegates between Glasgow and Edinburgh at £120 a time. ‘Sorry, but the whole thing is a pile of crap,’ he tells me. ‘They’ve been driving round in big convoys telling everyone else to get the bus.

When you arrive at the Scottish Event Campus, temporary home to the 26th Conference of the Parties, you see this corner of the most populous city in Scotland is technically no longer part of Scotland at all. It’s been formally designated UN territory. As a result, a ring of steel has been thrown around the area. Police vans from as far afield as Liverpool and South Yorkshire patrol the perimeter. 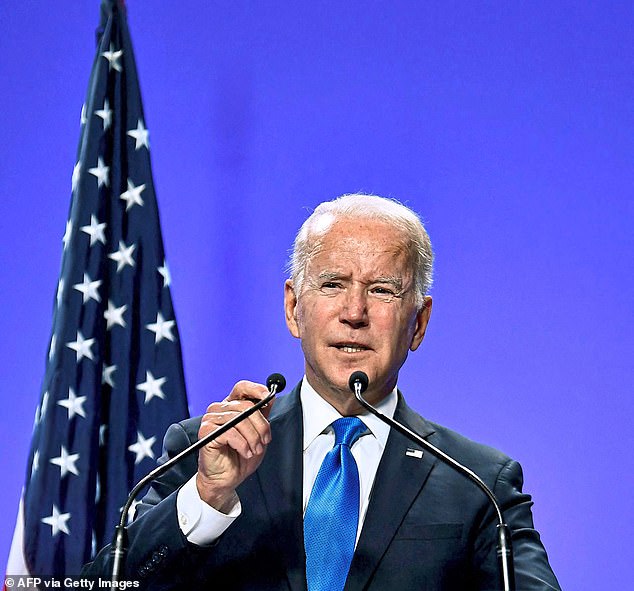 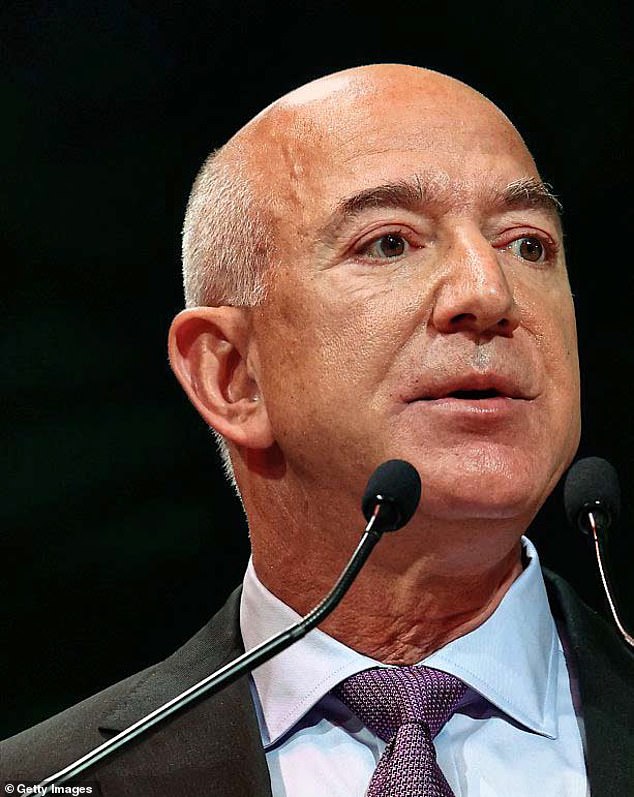 Amazon’s Jeff Bezos warned the world: ‘We must all stand together to protect our world.’ That is the same Jeff Bezos who blasted into space in his private rocket ship on a jolly with his mates

The Clydeside Expressway, one of Glasgow’s main arteries, has been closed to provide a VIP lane. When Joe Biden arrived, security was so oppressive that locals wanting to nip to the shops had to use the subway and travel several stops just to be able to find a way of crossing the street.

But while the locals have been temporarily displaced, the streets around the centre are far from deserted. Jamen, dressed in a full Darth Vader costume, has travelled from Washington State to bring his climate crisis solution to the attention of delegates. ‘The key is Marine Cloud Brightening,’ he tells me.

‘It helps whiten the clouds and creates global cooling.’

As I walk away, for reasons not entirely clear he begins to serenade me with a Spanish love song. A little further down the road, Val is assisting her colleagues from Christian Climate Action as they lie down in the drizzle and cover themselves in white shrouds.

‘This symbolises those who have died, are dying and will die as a result of the climate emergency,’ she says. 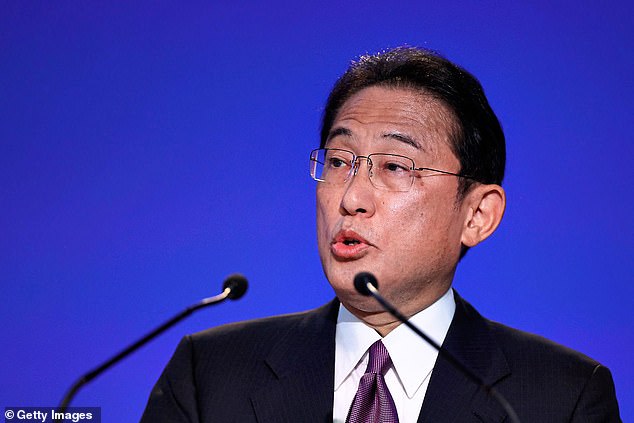 Japan’s PM Fumio Kishida, pictured, sent an empty jet on a 12,000 mile round trip so they could plan which was the best Scottish airport he could use for the Cop26 conference

Is she hopeful COP26 will prevent further loss of life? ‘An event like this is better than no event at all, but it’s not looking good.’

As you stroll alongside the iron barrier insulating the COP26 negotiators from the outside world, you can read a series of messages urging them to intensify their efforts.

Some, clearly penned by children, are touchingly simple. ‘Everyone must save the animals.’ Others are more surreal. ‘Bottom trawling is killing us.’ But the fence provides the perfect metaphor for how an event which is supposed to promote global sustainability has spiralled out of control.

‘The world is at one minute to midnight, and we have to act now,’ the Prime Minister intoned as the conference opened. But that’s what COP26 essentially is – an act. One giant performance. World leaders are little more than contract players, going through their typecast roles, spouting their cliched lines. Glasgow is their sound stage. Its people their unpaid extras.

Belatedly Boris has realised this. As COP26 has unfolded, he has retreated. The naive evangelism of his ‘hug-a-fish strategy’ has been replaced with realism. The commitment to eradicate coal and fossil fuels has been watered down. The US, China and Germany have all rejected calls to phase out diesel and petrol car sales by 2030.

A proposal to provide $100 billion a year for developing nations to reduce their emissions has been kicked into the long grass. Which may be just as well, because the entire event has been built upon a lie. Actually, three big lies.

The motorcades, the private jets, the receptions, the banquets. They were the only way to produce a deal. It couldn’t be done via Zoom. The key global players must see the white of each other’s eyes.

But yesterday – with the negotiations at their most crucial stage – those leaders were absent.

Boris and Biden had come and gone. As had Macron and Merkel. Xi and Putin never bothered to appear at all. A quick photo with Leonardo DiCaprio and the global elite vanished into the Glaswegian night.

The second lie was that COP26 represented the world’s final hope.

‘Quite literally, it is the last chance saloon,’ Prince Charles said two weeks ago. But, suddenly, opening hours have been extended. Even before a final agreement had been secured, attention was shifting to COP27 in Cairo.

But the final lie was the biggest of all. The one that held that COP26, even if it didn’t secure all of its environmental targets, would still represent a huge leap forward as it drove the environment to the top of public awareness.

Well, it’s certainly done that. But not in the way the organisers intended.

People are well aware that the Joe Biden who told them ‘the US is not only back at the table, but leading by example’ is the same Joe Biden who closed several Glasgow petrol stations so that his gas-guzzling limo had a secure place to refuel.

They’re aware that the Jeff Bezos, who said from the COP26 podium, ‘We must all stand together to protect our world’, is the same Jeff Bezos who blasted into space in his private rocket ship on a jolly with his mates.

They’re aware that Japanese PM Fumio Kishida, who pledged ‘Japan will dedicate all its strength to undertake actions and contribute to the future of humankind’, is the same Fumio Kishida who sent his plane empty on a 12,000-mile round-trip to work out which Scottish airport was the best to land at.

COP26 is over. The ring of steel has come down, the final motorcade has snaked out of the city and the last private jet has departed.

The people of Glasgow have got their city back. And they’d better make the most of it. Because if the events of the past fortnight truly represent the best last chance for our planet, then they – and the rest of us – are doomed.