As several ‘safe’ Liberal seats look like falling to independents on the east coast of Australia the mood is positive but nervous at the election party of Curtin hopeful Kate Chaney.

The climate and transparency-focused campaign of independent Chaney could see first-term Liberal member Celia Hammond unseated, which has sparked an election campaign resembling something more akin to ultra-marginal seat tussles.

Arriving at the Claremont Showgrounds on Saturday evening, Chaney said she was feeling optimistic as the results were rolling in for the east coast.

“I’m optimistic. I’m feeling optimistic. It’s really hard to get a sense of it when you’re speaking to people in the polling booths,” she said.

“But clearly something has shifted in Australian politics and I think that’s really exciting.

“It was really nice going around just talking to all our volunteers and having chats to voters … it had a really positive energy to it and I’m hopeful.” 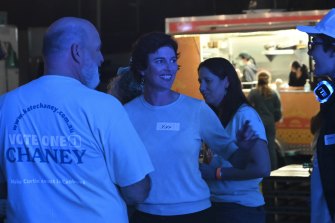 Simon Holmes a Court believes teal independents will win up to five seats.

The Climate 200 convener who, in part, funds the independent candidates including Chaney, said earlier on Saturday night that Kooyong, Goldstein, Wentworth, North Sydney and possibly Mackellar may fall.

“There’s about 30 per cent counted and they all look solid,” he told The Age.

Holmes a Court is at the Auburn Hotel where Kooyong independent Monique Ryan’s campaign event is being held.

Ryan arrived earlier and is now in a private room with her advisers as she waits for a result to become clear. She is in a commanding position, ahead on a two party preferred vote of about 52 per cent.

Incumbent Josh Frydenberg has suffered swings against him in less gentrified areas of Kooyong where his support has traditionally been highest.

Losing Curtin would place a giant boulder in the Liberals’ path back to government, according to Notre Dame Politics and International Relations professor Martin Drum. 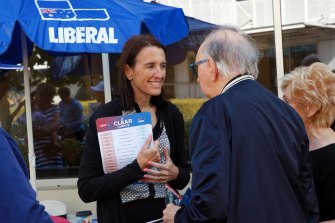 Curtin has always been a Liberal seat – except for a hiccup in 1996 when incumbent Liberal Allan Rocher fell out with his party and ran successfully as an independent.

Under former foreign affairs minister and one-time prime ministerial hopeful Julie Bishop’s rein from 1998 to 2019, she gradually increased the margin to 20.7 per cent at the 2016 election.

Hammond lost some paint following her victory, but at 13.9 per cent Curtin remains the Liberals’ safest seat in WA, its spiritual home and the source of its best fundraising prospects.