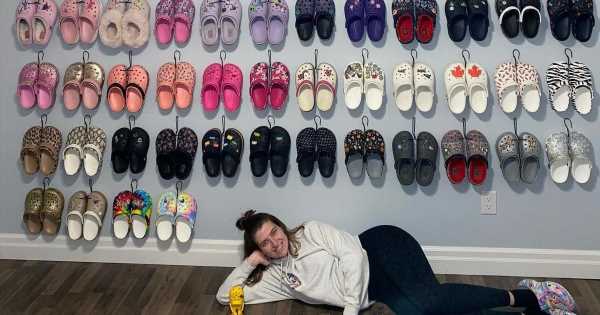 A woman obsessed with Crocs has bought more than 100 pairs of the divisive shoes and displayed them all over her bedroom wall.

Rayann, 20, from Canada, started her "ugly shoes" collection in 2017 with one pair of Crocs.

And soon, she started posting videos on TikTok as she added more to her collection.

"Crocs found my account and I became a Crocs ambassador," she wrote in one of her viral videos.

"Sometimes people call me a sociopath."

She now owns 114 pairs of non-slip, scratch-resistant shoes with chunky soles and 700 customisable "Jibbitz" charms, which can be attached to the shoes as decorations.

Calling herself a "Crocs queen", Rayann often flaunts her Crocs online and matches her outfits with the shoes.

In one clip, she gave viewers a peek at her entire collection.

Fans were stunned as she walked into her bedroom and panned the camera over wall Crocs, which had been carefully colour coordinated.

When a fan asked how she washes her shoes, she posted a video showing herself dumping them into a swimming pool and rubbing the dirt off with a huge yellow sponge.

Rayann, who is also a huge Disney fan, likes to style her Crocs in keeping with her favourite animated films.

Every time she visits the theme park, she picks a different pair of the shoes depending on if she's visiting Magic Kingdom, Hollywood Studios or Disney Springs Dinner.

Some viewers admitted Rayann is helping them to warm to the controversial footwear.

One confessed: "I think I want a pair now…"

"I never knew I needed something so bad," a second also shared. "Can I go shopping at your house?"

But others said they are still put off by the shoe style.

"I bet your room smells of the Crocs store, how can you sleep at night?" a viewer asked.

Although Rayann didn't reveal how much she has spent on the shoes and the charms, one fan estimated her shoe collection is more than CAD $7,400 (£4,467).