Our visit from Wally! Stunned couple say they feel ‘very lucky’ after the Arctic walrus climbed aboard their boat while they were docked in the Isles of Scilly – despite him doing ‘a bit of damage’

A couple on holiday in the Isles of Scilly have told how they had frequent visits from Wally the famous wandering walrus who returned to the UK coastline last week.

The adventurous animal is thought to have drifted from the Arctic on an iceberg and first hit headlines when he was spotted around islands north of Scotland in May 2018.

He arrived in the Isles of Scilly last Thursday after trips to Ireland, Spain, France and Greenland – and holidaymakers Sherry and Rodney Thomas say they were delighted to spend a few days in Wally’s company.

After docking their boat at the Cornish archipelago, the couple were ‘shocked’ to discover the walrus lurking around and said on This Morning that while he did some damage to inflatable vessels, they felt ‘very lucky’ he climbed aboard their diving platform. 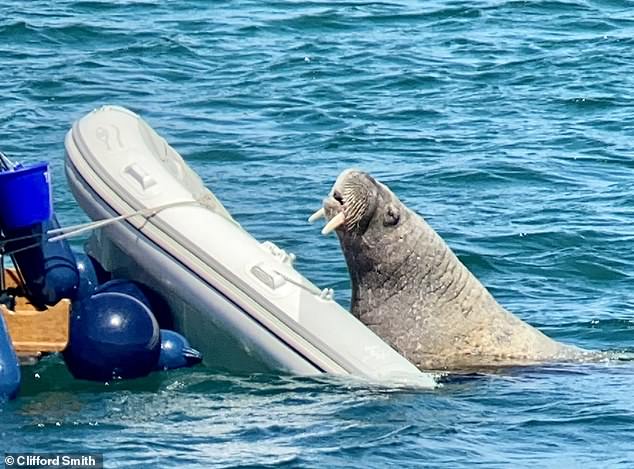 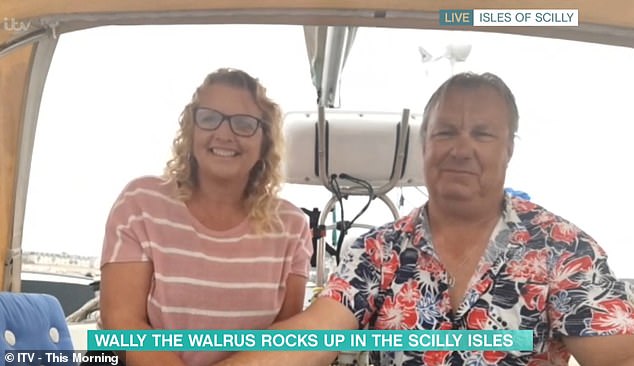 ‘As we came into anchor another chap on a boat said to us, “Pull your rib in, there’s a walrus here”. We looked at each other and thought, maybe he’s had one too many drinks, they don’t belong this far.

‘We anchored up, heard a bang on the back of the boat, and the boat went sort of down to the back and when we looked out we had a walrus on our diving platform.’

Sherry admitted they ‘didn’t take much notice’ after being told the animal – who was spotted in Wales in March and Cornwall last month – was nearby.

‘Shocked more than anything,’ said Sherry of the experience. ‘We weren’t really expecting it, when someone says there’s a walrus around you don’t really take much notice. 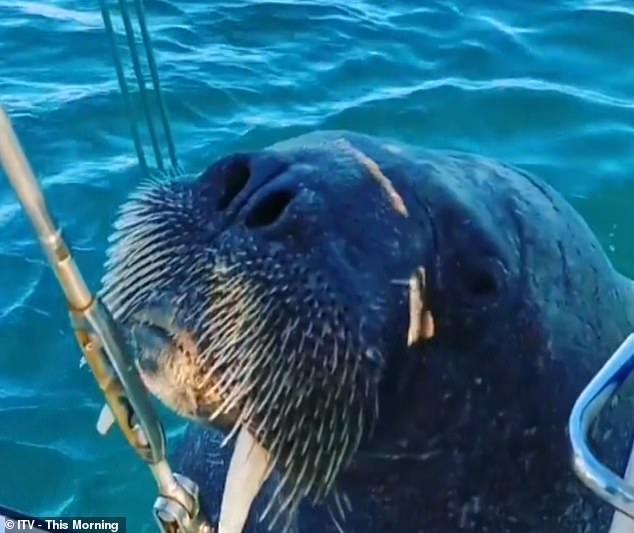 The adventurous animal is thought to have drifted from the Arctic on an iceberg and arrived in the Isles of Scilly last Thursday after trips to Ireland, Spain, France and Greenland 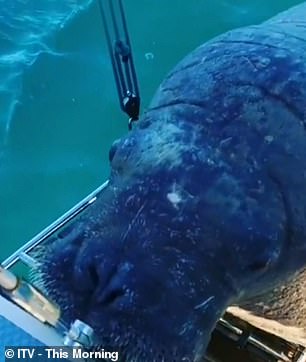 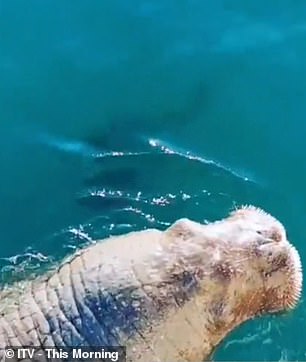 After docking their boat in the Isles of Scilly, the couple were ‘shocked’ to discover the walrus lurking around. He spent a couple of days ‘swimming around’ and clamouring aboard their boat

‘He spent a couple days with us really, just kept visiting and getting on the boat and swimming around.’

When asked whether she thought the animal may have mistaken their diving platform for an iceberg, she said: ‘It’s natural instinct for them to use their tusks and find a place to rest, he was just doing what walrus’ do I suppose!’

While many tourists and locals have been delighted to spot the walrus, some boat owners have been left deflated after the large arctic mammal punctured dinghies he mistook for resting spots.

But the couple admitted they weren’t at all concerned with the animal damaging their boat, and just felt fortunate to experience the Arctic animal up close. 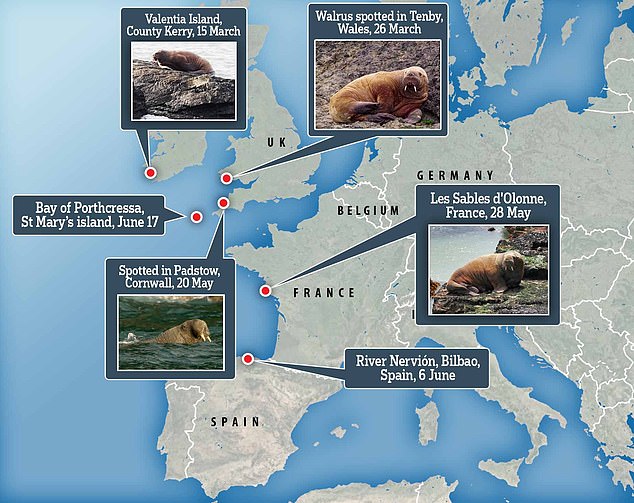 Wally was last spotted soaking up the rays off the coast of Spain less than a fortnight ago – as he continued his long-distance swim across Europe. Pictured, a map of Wally’s movements

‘How often do you in a lifetime have an experience like that?’ Sherry pointed out. ‘You’re very lucky to see them on the TV, but to have them actually here – the experience was just amazing, we were happy!’

Wally was last spotted soaking up the rays off the coast of Spain less than a fortnight ago as he continued his long-distance swim across Europe. The Arctic walrus traveled 230 miles through the Bay of Biscay to the River Nervión earlier this month.

He was first spotted in County Kerry, Ireland in March, before heading over to the UK after he is believed to have fallen asleep on a drifting iceberg in his Arctic homeland.

Six days after first appearing in Ireland in March, the RSPCA were called out to check on the creature at the bottom of a cliff near Broad Haven South beach in Pembrokeshire, Wales.