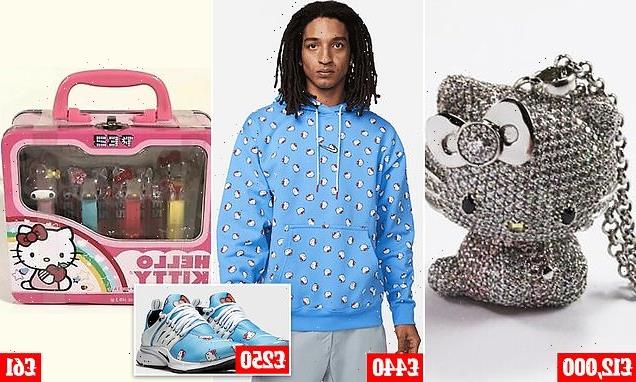 Could YOUR Hello Kitty memorabilia be worth a fortune? The merchandise that can sell for as much as £12,000 on eBay

She’s one of the world’s most famous cats – and has been put on everything from planes and trains to people’s skin.

Since it’s launch in 1974, the simplistic Japanese cartoon cat Hello Kitty has skyrocketed into one of the most profitable franchises on the planet.

From Mariah Carey to Paris Hilton, the Hello Kitty brand has attracted a wealth of admirers over the decades.

And now fans of the adorable Sanrio character have been cashing in on some of their now vintage wares, as items such as watches, cups and pillows have increased in value over the years.

People are willing to pay a high price for collectable items such as the luxury Hello Kitty jewelry range, with necklaces valued at up to £12,000.

Meanwhile collectors items, like Pez dispensers, are now being sold second-hand on sites like ebay and fetching up to £50, while Victoria Couture bags go for up to £80.

After the launch of it’s sell-out collaboration with Nike this year, FEMAIL take’s a deep dive into the beloved Japanese cat’s high culture history. 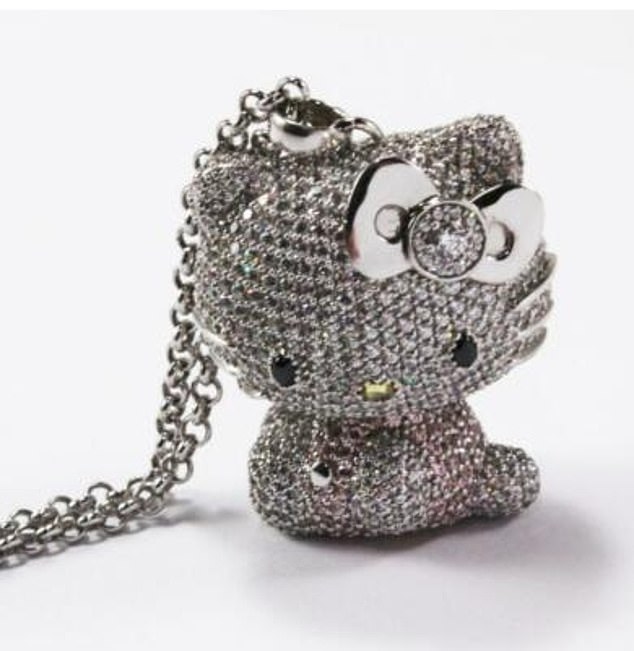 Hello Kitty items are being flogged online for up to £12,000 as collectors rush to get their hand’s on merchandise featuring the cartoon cat

One piece of jewellery from a collection with Kimora Lee Simmons is currently under auction for over £12,000 online 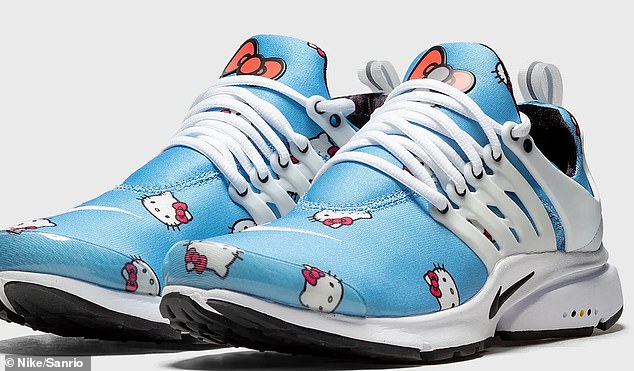 One listing on the site is selling the trainers for £206, while other listings offer the shoes for up to £250

A cartoon character, global fashion icon and megabrand, Hello Kitty is one of the most bizarre success stories in modern business.

The Hello Kitty was first drawn by designer Yuko Shimizu, 76, 48 years ago and is owned by Japanese company Sanrio.

Created in 1974 the little cat character which first appear on a vinyl purse, came with only a limited back story – she was born in London and liked cookies.

Despite being widely known as Hello Kitty, her full name is actually ‘Kitty White’ and she lives in suburban London with her parents, George and Mary. 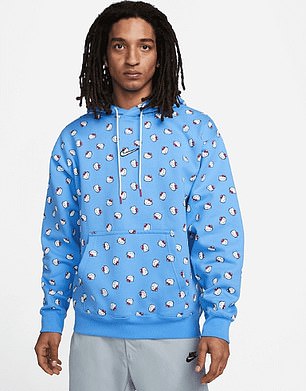 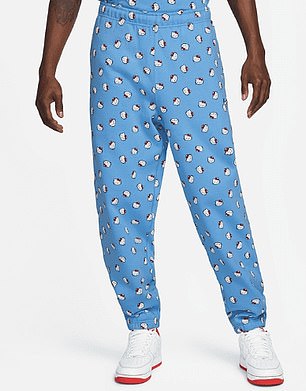 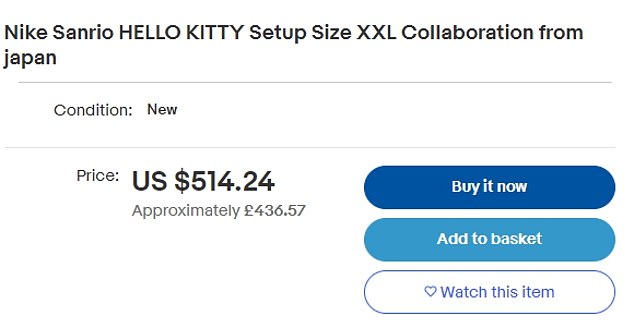 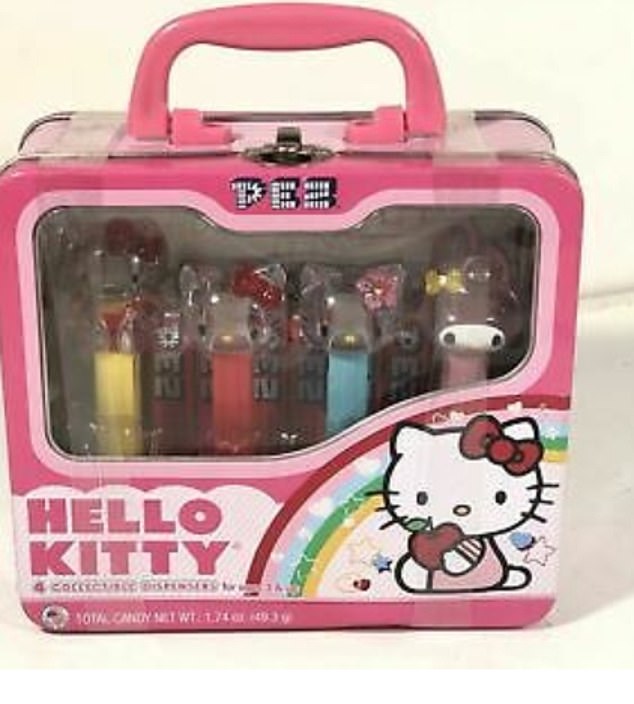 Meanwhile a set of Hello Kitty Pez, which is described as having been retired, can fetch up to £61 online 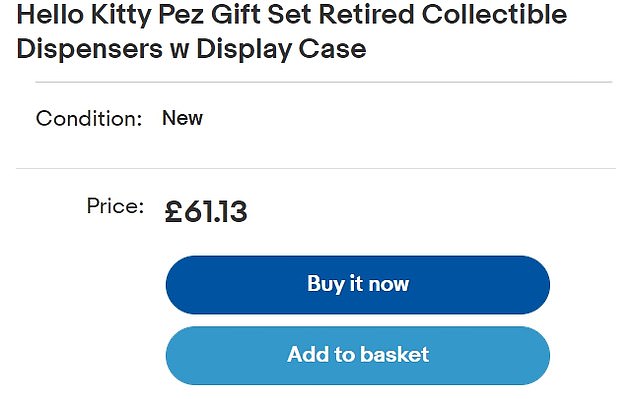 One listing shows the Pez, which is a kind of plastic sweet dispenser, being sold for up top £60

Meanwhile she also she has a twin sister, Mimmy, who wears a bow on the opposite ear.

Creators at Sanrio have said that Hello Kitty’s lack of mouth is because they want her emotions to remain ambiguous, and allow fans to ‘project their own feelings onto her’.

The Looper reported Hello Kitty’s head designer Yuko Yamaguchi saying: ‘Her life is set just above that of Japanese girls.

‘Around the time Kitty was born, England was the dream country of all the girls in Japan.

‘So we fit her in English life.’ 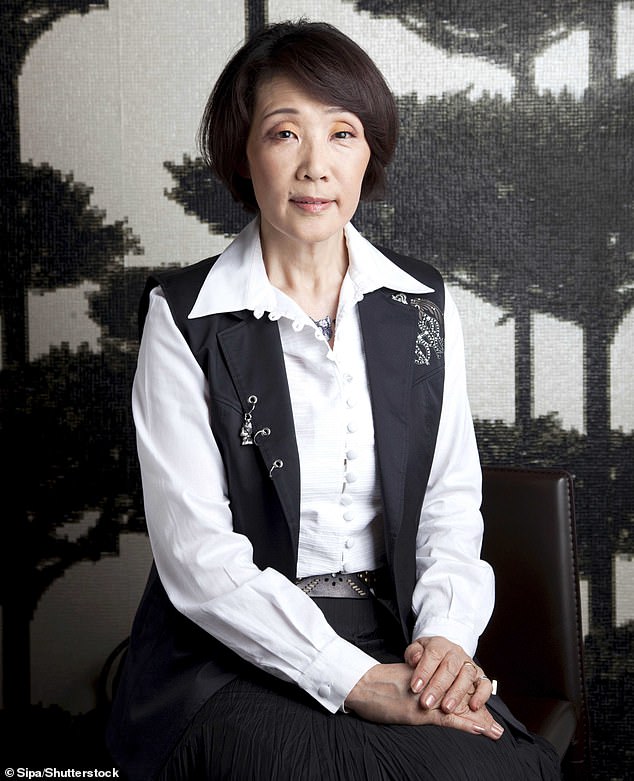 The Hello Kitty was first drawn by designer Yuko Shimizu, 76, 48 years ago and is owned by Japanese company Sanrio

Since then the brand has exploded, reaching the global teenage market in the 90’s and grossing £6 billion a year by 2014.

In 2005, Simmons Jewelry Co. and Sanrio announced a partnership for ‘Kimora Lee Simmons for Hello Kitty’.

It was launched exclusively at Neiman Marcus, with prices ranging from £175 to £3,500, with items dripping with 18 carat gold, semi-precious stones and diamonds.

The bobtail cat even has it’s own eatery – The Sanrio Hello Kitty café is located in Siam Square, Bangkok and was opened in September 2014.

The menu includes delicately made bao buns in the shape of the cat and kitty themed cocktails.

The same year, fans were in for a shock after learning  that the feline they loved and knew, isn’t actually a cat at all. 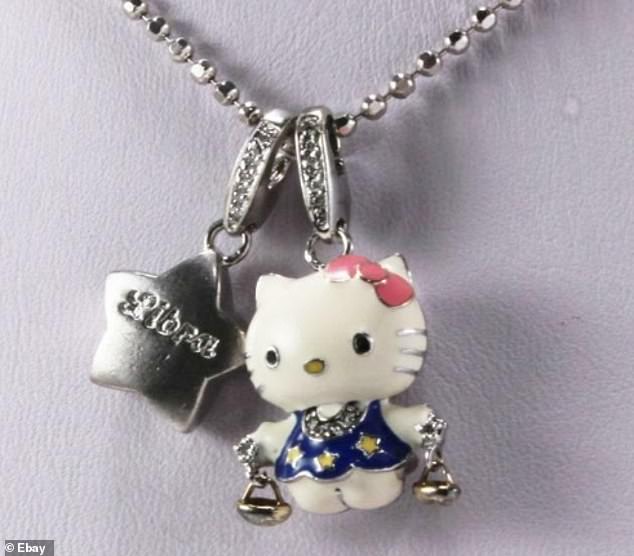 A Kimora Lee Simmons star sign pendant necklace (Libra) can fetc upwards of £500 on Ebay, the necklace is made of silver and precious stones with an enamel coating 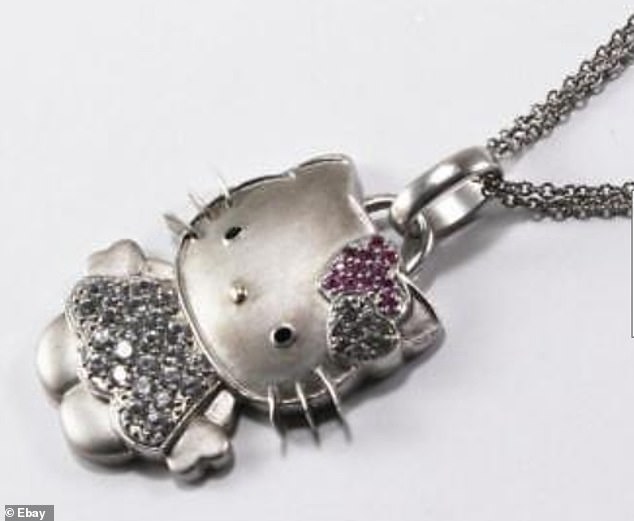 A sapphire necklace, part of the Kimora Lee Simmons x Hello Kitty collection, can reach up to £600 on eBay 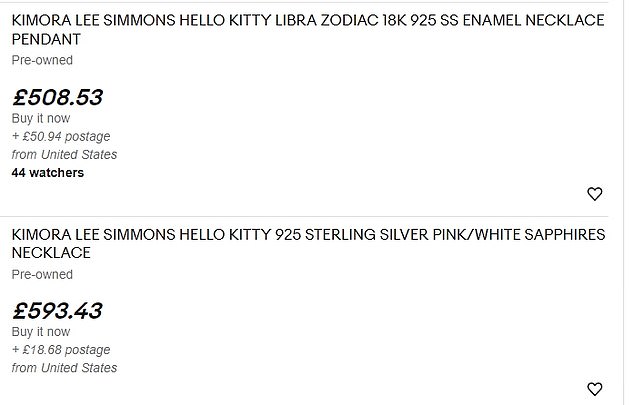 Instead Sanrio revealed she is a  ‘little girl as heavy as five apples’.

The discovery was made by Christine R. Yano, who told the LA Times: ‘That’s one correction Sanrio made for my script for the show. Hello Kitty is not a cat. She’s a cartoon character. She is a little girl.

‘She is not a cat. She’s never depicted on all fours. She walks and sits like a two-legged creature.

‘She does have a pet cat of her own, however, and it’s called Charmmy Kitty.’

With many collectors and fans worldwide, one has been recognized as the Sanrio character’s official top fan.

In 2016 Masao Gunji, 67, from Chiba, Japan was recognized by Guinness World Records last November for having the largest collection of Hello Kitty memorabilia.

He owns an astounding collection of 5,169 items, which can be seen in his pink house in the video.

The record holder has cookware, stuffed toys, stationery and artwork – a collection he has build alongside his wife costing the pair thousands over the years.

When asked why he likes Hello Kitty Gunji responded :’For some reason when I’m sad, she looks a little bit sad as well and when I am happy, she looks happy.

‘Hello Kitty has always cheered me up when I was unhappy.’ 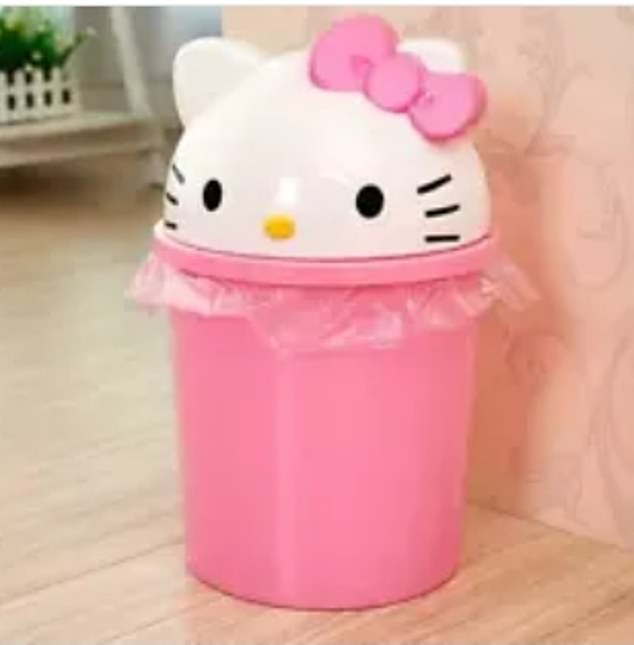 Meanwhile a ‘cute HelloKitty bin’ is now fetching £28.48 on the second-hand website as fans are desperate to get their hands on it

In 2022, the craze shows no signs of slowing down, with fans flogging their Hello Kitty collections online.

One crystal encrusted Hello Kitty necklace is currently up for auction on eBay for over £12,000.

Meanwhile encrusted Kimora Lee Simmons pieces still valued at hundreds and in some cases over £1,000 online.

Even a simple tote back is being valued at £20, and a popular pillow from the 90’s once sold for £10 is now being flogged for £40 online and dubbed as a ‘rare piece’.

A pez collection is being flogged for £61 on Ebay, while a simple stationary set from Japan is being sold by different sellers for over £100.

Products range from a lighter with a pink flame, leather tissue holders, bins, memorabilia set and even toasters that make your morning breakfast kitty-fied. 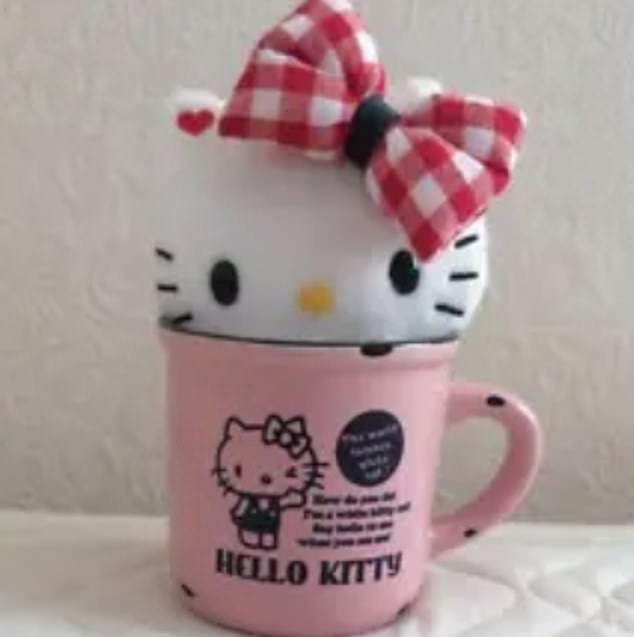 Even a mug from the brand can fetch up to £60 or more online, with collectors describing it as ‘rare’ and ‘vintage’ 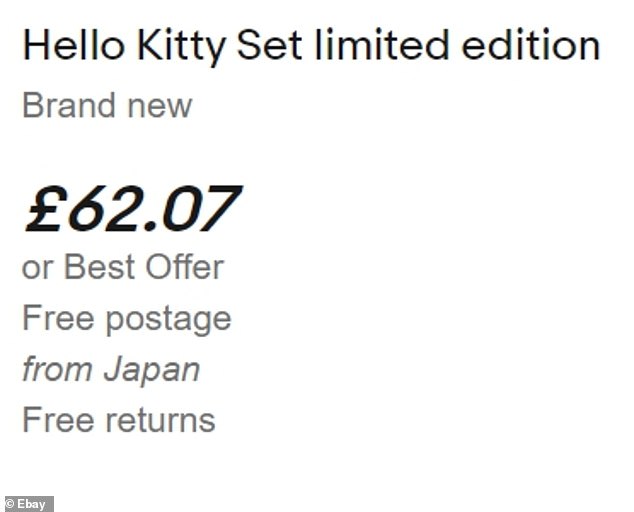