The West Australian Corruption and Crime Commission is considering a request to investigate claims a former Labor staffer was tasked with fast-tracking border exemptions for party donors ahead of the public at the start of the pandemic. 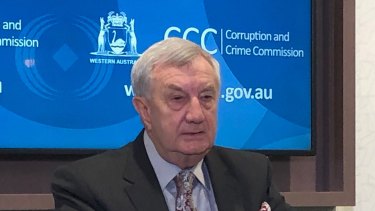 She said while working from home from April to June 2020 Cook tasked her to work with a contact in former police minister Michelle Roberts’ office to help progress G2G entry applications for members of Labor’s Business Roundtable fundraising program.

“Roger asked me to specifically take care of G2G applications for the Labor Business Roundtable members, which were platinum, gold and silver,” Spasojevic told the board on July 7.

“They were to be fast-tracked and I had a ministerial contact in the police minister’s office.

“I was to contact her directly and have our business Labor roundtable members fast-tracked and their family members so they could come in and out of the state on business, so they wouldn’t be affected by what was going on with the pandemic.”

A spokeswoman for the CCC said it had received Davies’ letter and was assessing it, however the commission generally did not publicly confirm what it was investigating.

“As is the case with all matters raised with the commission, it will be considered and assessed,” she said.

“A decision will then be taken in relation to whether any further action is appropriate and, if so, the nature of that action.

“The assessment of matters raised by Ms Davies has not been completed. It is not the general practice of the commission to confirm or discuss if and when investigations are commenced.”

Davies said last week that if the claims were found to be true it would be a betrayal of trust for the families separated and denied entry into WA at the time.

She also said, if true, they demonstrated a misuse of power and would raise questions about the influence of donors and ministers in the McGowan government.

The Business Roundtable is a cash-for-access forum connecting businesspeople with Premier Mark McGowan and cabinet ministers in intimate settings and is one of WA Labor’s biggest money-spinners.

Last week a Labor spokesman “categorically denied” the claims which he said were not backed by any evidence.

A spokesman for Cook said it was appalling for the opposition to question the integrity of WA Police, which managed the G2G system.

“Decisions on G2G applications during the COVID-19 pandemic were made independently by WA Police,” he said.

How hard border exemptions were handled and granted caused controversy for the McGowan government in the early days of the pandemic.

Spasojevic is claiming she was unfairly sacked from her role as an electorate officer in Cook’s office in July 2020.

She was dismissed after audits revealed she had travelled overseas three times using personal leave, and had taken just three days of annual leave over three years of employment.

Spasojevic maintained that she took direction from Cook on how to take leave while the government argued she had flouted rules clearly defined in employee handbooks.

Do you know more about this story? Contact the reporter privately at [email protected]