Years after helping to draft legislation that reversed cruel apartheid-era social policies, her work trying to bring stranded South Africans back home exposed her to the coronavirus. She died of complications of the disease. 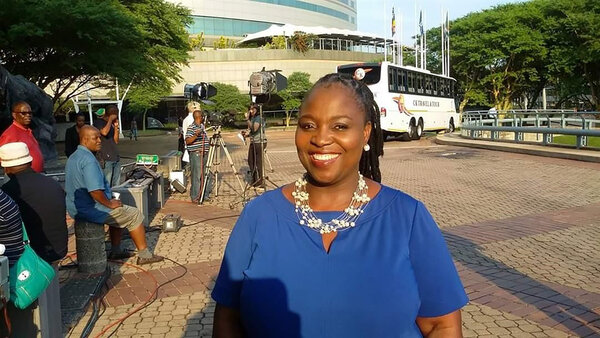 This obituary is part of a series about people who have died in the coronavirus pandemic. Read about others here.

In her early days as a social worker, Conny Nxumalo was so dedicated to the homeless shelter where she served that the children there viewed her as a mother.

“It was a place of safety and all those kids, they called her mama — sometimes they would fight with me, saying this is our mother” too, her daughter Tintswalo Mkhize said.

Ms. Nxumalo’s devotion to her job earned her the title of South Africa’s “chief social worker,” but despite the long, draining hours of work, she regularly found time to dance with her three granddaughters. When she discovered “Jerusalema,” an upbeat South African song that spurred an international dance craze earlier this year, Ms. Nxumalo played it repeatedly with them for weeks.

Ms. Nxumalo died on Aug. 22 in a hospital in Pretoria, the capital. She was 53. Her daughter, Ms. Mkhize, said the cause was complications of Covid-19.

Constance Glerah Nxumalo was born on Feb. 18, 1967, in Rolle, a village in South Africa’s rural northeast Mpumalanga province, where she was raised by her schoolteacher mother, Anny, and her stepfather, Ezrom Makhubela, who was a school principal.

The eldest of six children, she was known in the family as “Sesi Conny”— sister Conny — a term of endearment that would years later find its way to her workplace, too.

A bright student, Ms. Nxumalo was forced to shuffle between schools under the suffocating apartheid education system that sought to limit learning for Black South Africans.

She enrolled at the University of Limpopo where she earned a degree in social work in 1989. The following year, as a young single mother, she took up her first job as a social worker in a segregated township in Gazankulu, a Bantustan, or Black-only state, within apartheid South Africa.

The Black homeland areas where Ms. Nxumalo worked were impoverished and neglected, the result of apartheid welfare policies developed primarily to help poor whites. With the advent of multiracial democracy in 1994, Ms. Nxumalo took on a pivotal role as the new government widened those services to Black and other races for the first time. She contributed to the writing of legislation to protect children, the elderly and families in need, helping to lay the foundations for what is now Africa’s largest social safety net.

Ms. Nxumalo relished the enormous challenge. Decades of repression had caused staggering unemployment and poverty for the non-white majority population.

After working her way up to director in Mpumalanga’s Ministry of Social Development, by 2007 she was tapped to run the national Families and Social Crime Prevention Department, a unit that worked alongside the police to lower crime rates driven by poverty.

“You can see that there are social ills that are really devastating our communities,” she told the South African Broadcasting Corporation in 2015, at a conference aimed at attracting more people to into social work. Ms Nxumalo and her colleagues had spent years trying to clear a backlog of tens of thousands of foster care cases, and she had highlighted the issue in Parliament in March.

Promoted in 2013 to deputy director-general of the national Ministry of Social Development, Ms. Nxumalo represented the ministry in the committee handling South Africa’s response to the coronavirus pandemic. She was key in repatriating citizens stranded abroad after South Africa closed its borders in March. Ms. Nxumalo believed she’d contracted Covid-19 during one of the committee’s meetings, her daughter said.

At the time of her death, she was enrolled in a Ph.D. program at the University of the Witwatersrand. Her research focused on teenage mothers in Thembisa, a township east of Johannesburg.

Along with Ms. Mkhize and her grandchildren, Ms. Nxumalo is survived by her daughters Ndzalama and Njombe; five younger siblings; and her mother and stepfather.