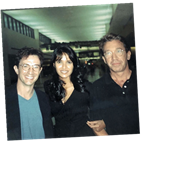 “This is how I first got my SAG card by playing a glorified extra on the film ‘Jungle 2 Jungle,'” the Top Chef star began her Instagram post, which detailed her SAG story.

“I was credited as ‘The Snake Lady’ because of a snakeskin coat they made me wear 🐍 ,” she continued.

“Also, who says I don’t like Republicans? 😂,” she joked about posing alongside comedian-actors Tim Allen, who previously compared being a Republican in Hollywood to 1930s Germany on Jimmy Kimmel Live! in 2017, according to EW, and Martin Short. “I earned my SAG card — when I was 14, I did an MTV promo for My Super Sweet 16,” Lawrence recalled in her 2013 Screen Actors Guild Awards best actress acceptance speech. “I remember getting [the card] in the mail and it being the best day of my entire life because it officially made me a professional actor — which put me in a category with all of you. And now I have this naked statue that means that some of you even voted for me.” “I got my SAG card when I was 14,” Hathaway said during her 2013 best supporting actress speech. “It felt like the beginning of the world. I have loved every single minute of my life as an actor. And I have been the recipient of so much kindness and support from actors in this room and out of it.” Shipka might be the proudest card-carrying SAG member, ever. “It was probably a commercial,” the actress said of how she earned her card. “I was definitely very tiny. It was all a blur. I knew about SAG, though. I was definitely pro-SAG since [I was] a young child. I carry the card with me! Any time you ask, I’ve got my SAG card on me. I can just bust it out.” “The ABC Afterschool Special Magical Makeover is what earned me my SAG card, and I’m back here at ABC still,” Washington said. “I think I was a cheerleader in it.” “Game of Thrones,” Turner told Elle. “I felt really great. It felt I was actually a real actress. I was part of something, finally. I don’t actually know where it is — I think I lost it. But it means so much to me! I keep it in my heart.” “I got my SAG card for a K-Mart commercial where I had a tarantula crawling all over my face,” Kemper recalled. “It was so furry and large and it felt closer to a kitten than an insect and it was actually kind of nice — I only work with real animals.” “I got my SAG card in 1994 doing an episode of Law & Order, which is a rite of passage for any American actor, I think, or any actor of any kind,” Paulson said. “It was called ‘Family Values.’ “ “I got it on a TV show called Throb,” Harris told TV Guide. “I played a little kid who was stalking Jane Leeves.” “Fran Van Hartesveldt, a commercial agent in town, explained to me that to get a SAG card, I needed a job and to get a job, I needed a SAG card,” White recalled to TV Guide. “He had pity on me and gave me one line in a show called The Great Gildersleeve. Years later, when I got my own show I hired Fran as one of my writers.” “It was an anti-drug PSA,” Alison Brie told TV Guide. “This was the first thing I ever auditioned for. They didn’t pay me to do the commercial, but they gave me my SAG card.” How’s this for good fortune? “For Glee, because it was my first job ever,” Colfer said of earning his SAG card. “Amazing, right?” “I was doing this MCI commercial when I was 17,” Prepon said. “I think that made me eligible and then I got it on That ’70s Show. I had no clue what it was because I had never acted before I got the commercial. It was one of those things that was like kismet — it kind of found me.” Modern Family star Ty Burrell got his start on Law & Order — but he joked he was so “unmemorable” that he got away with playing different characters on different episodes: “Nobody noticed that now I was playing an assassin.” “The first movie I ever did was with Jonah Hill,” Wiley told Elle, adding, “Method Man played my boyfriend. It was called The Sitter. That’s how I got my SAG card. It felt unreal. It was something I’d always heard about and felt like I was going to work my entire life to get. It was like a dream come true. I don’t know why I keep it in my wallet, but maybe in case someone is like ‘Are you?’ and then I can be like ‘Yes’ and pull it out. It’s like a detective badge: ‘SAG, please step aside.’ “ “I was eligible for many years before I actually joined. I had to join when I booked an episode of Law and Order: SVU,” Cox revealed. “The episode is called ‘Closet,’ I think. I joined and I didn’t have the money for the dues so they put me on a payment plan. I paid off my SAG dues in 2008 over a six-month period.” “I ran into [Law & Order creator] Dick Wolf … I said, ‘I didn’t get my diploma because of you, but I got my SAG card because of you,” Facinelli said at the 2013 SAG Awards. “I was majoring in theater. It all worked out.” “I got my SAG card doing the first-ever commercial for Dasani bottled water,” Ferguson told TV Guide. “I thought I only got the part because of my red hair but then the commercial was shot in black and white and I realized I got the part could I could sell the s— out of overpriced bottled water.” “It was The Brady Bunch,” Wilson said. “That’s how I got my Screen Actors Guild card. I played Pat Conway, the cheerleader who Greg chose to become head cheerleader. It was so much fun.”