Coloured diamonds, hailed as ‘lockdown jewels’ because their rainbow dazzle makes them visible even on Zoom, are the sparkling accessory du jour. These are real diamonds that instead of being clear, appear black, blue, green, brown or pink.

The rarity of some coloured diamonds makes them eye-wateringly expensive — only 0.0001 per cent of rough diamonds have a colour — which is probably why they’ve become the ultimate celebrity status symbol.

Actress Lily Collins, star of Netflix’s Emily In Paris, is the latest celebrity to join the sisterhood of pink diamond wearers (which includes Blake Lively, Anna Kournikova, Margot Robbie, Kate Moss and Victoria Beckham) when she got engaged to film director Charlie McDowell this September. 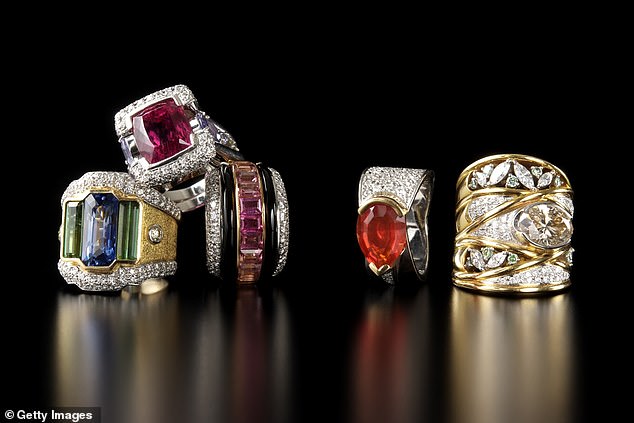 But it was Jennifer Lopez, who first started the trend for coloured engagement rings with a huge pink sparkler from then fiancé Ben Affleck in 2002.

Between 2005 and 2019 fancy pink diamonds (‘fancy’ refers to a scale used in the industry to measure the colour, clarity and a superior quality of diamond) rose by 350 per cent, according to the Natural Diamond Council.

But the enthusiasm for coloured stones goes beyond pink: Myleene Klass recently acquired a rare natural black 5ct diamond ring by Mayfair jewellers, 77 Diamonds. According to their director Ira Kormind, the ‘depth and intensity’ found in a stone of this weight is exceptionally hard to find and she would expect it to retail for at least £30-£40k.

But not all coloured diamonds are that pricey. U.S. brand Le Vian’s trademarked ‘chocolate’ diamonds have become popular precisely because they are not created to be kept in a vault.

A favourite with Rihanna, the range includes a 14ct Strawberry Gold Sea Deep Blue Topaz Ring with chocolate diamonds (£499, ernestjones.co.uk). Only 4 per cent of brown diamonds meet the criteria to be called ‘chocolate’, Le Vian CEO Eddie Le Vian boasts, but they can still offer a saving on their colourless equivalents, carat for carat. 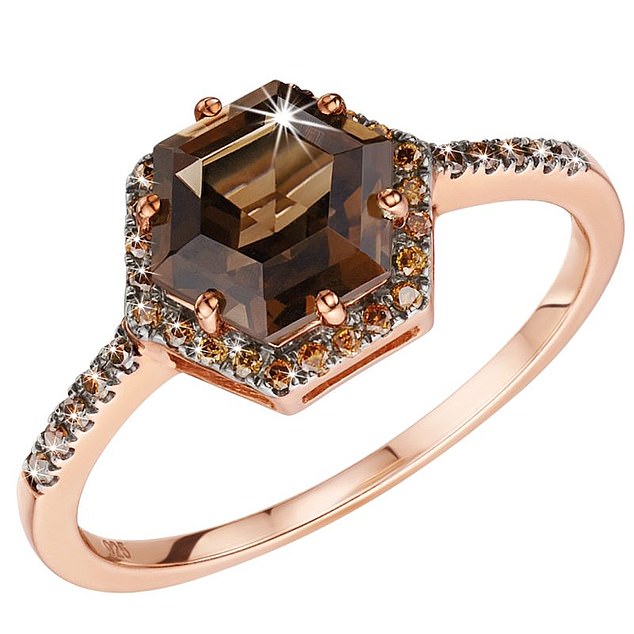 White diamonds should be as close to colourless as possible, with their colour grading classified in letters starting with D (colourless) and continuing to Z (more yellow). ‘The current price of a 1ct D Flawless white diamond is $20,000 (£15,000),’ Eddie explains.

So, where did it all begin? Not with J-Lo’s pink sparkler, impressive though it was (or even the blue diamond that celebrated her later engagement to singer Marc Anthony). The popularity of coloured diamonds in recent years can be traced back to 1983 with the discovery of the Argyle mine in Australia, from which more than 90 per cent of the world’s supply of pink and brown diamonds comes.

It meant many more coloured stones were suddenly available, but at the time, the ideal colour of a diamond was solely ‘gin and tonic’ — colourless — with diamonds graded by the 4 Cs: colour, carat (simply, their size), clarity and cut.

The challenge for mining giant Rio Tinto, which owns the Argyle diamond mine, was to create a desire for browns, the least rare of the coloured diamonds, previously overlooked as ‘curiosities’ or rejects. A new, independently-endorsed grading system (C1 to C7) was set up that gave the diamonds — from champagne to cognac to pink — validity in the jewellery trade. 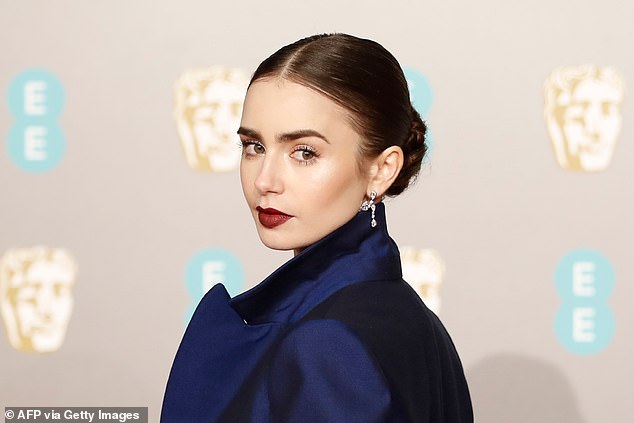 Actress Lily Collins (pictured), star of Netflix’s Emily In Paris, is the latest celebrity to join the sisterhood of pink diamond wearers

Today, coloured diamonds are much more appreciated and the closure of the Argyle mine last week, which after 37 years is completely depleted of its core treasure, could well see prices soar.

Since May, some of the biggest fine jewellers — Cartier, De Beers, Chopard, Tiffany — have reported unprecedented sales of rare coloured diamonds, which can now cost seven times that of a white stone. Later this month, Christie’s is selling a gobstopper-sized rose-cut pink 14.83ct diamond which is expected to go for a whopping £29 million.

Of course, the value placed on any diamond, coloured or not, does not just derive from what’s dug out of the ground. Just as a great pattern-cutter is crucial to haute couture, a brilliant stone cutter is often behind the most iconic sparkling gems and must adapt to their shade.

For instance, Christopher Cavey, who was consultant gemmologist for The Royal Collection during the Diamond Jubilee Summer Diamonds Exhibition at Buckingham Palace, explains that a black diamond is not easy to cut as it is formed from a mixture of diamond and carbon; expert treatment is needed to prevent it shattering.

Christopher wears a black diamond that is ‘as hard as a cannonball’ — the result, he explains, of a meteorite shower three billion years ago that found its way to the earth’s core and, when forced to the earth’s crust by pressure and heat, has ended up on his finger. 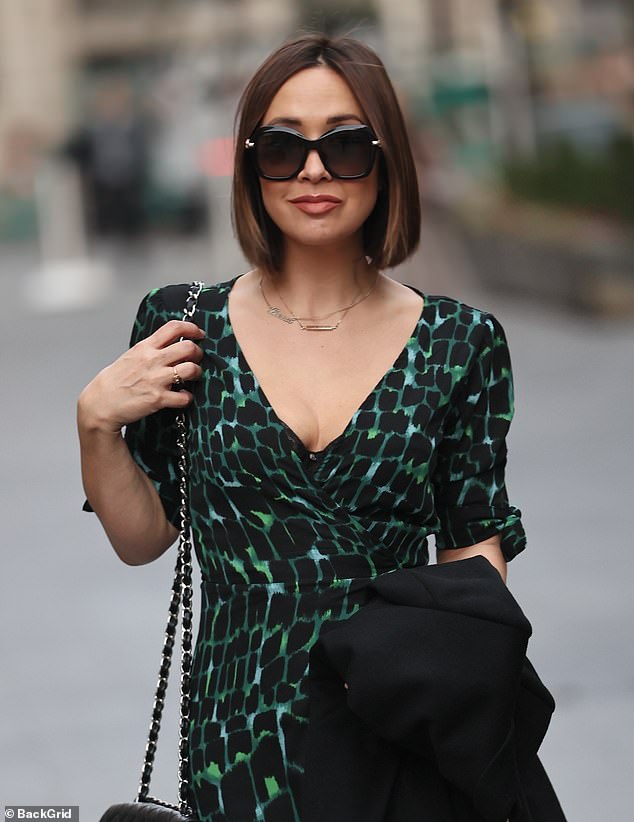 ‘The beauty of diamonds is they are interesting and fun to have around,’ he says. ‘They remind us how we are part of everything and everything’s a part of us.’

Women buying jewellery for themselves is a huge driver of demand for coloured diamonds, says Simon Fraser, who leads the MA course in jewellery design at London’s Central Saint Martins.

‘The fashion for one of a kind, bespoke, couture pieces where wealthy women know their mates won’t have one of those, is crucial.’ Solange Azagury-Partridge, whose jewellery pieces are housed in the V&A and Louvre museums, is a go-to for bespoke pieces infused with humour.

‘I like to use diamonds that don’t necessarily look like a diamond, taking away the trophy element,’ she tells me.

A recent design using green diamonds is a leaf motif ring entitled Mary Jane, with a price tag of £13,000.

In the run up to Christmas, expect Dior, Tiffany and De Beers to outdo each other with similarly colourful baubles; while Simon Fraser also credits high-end brands such as Chanel Bijoux De Diamants (fine jewellery infused with the fashion prowess of costume jewellery) for the candy-coloured gemstone vogue — brown diamonds, in particular, he sees as flattering (‘think of tortoiseshell eyewear’).

In order to witness coloured diamonds for myself, I visit Gray’s Antiques, an Aladdin’s cave of precious gemstones in Mayfair.

As it catches the light, it is astonishing, outshining stones treble its size. It’s also worth more than £7,000. I buy a Lottery ticket on the way home — who knows, these lockdown jewels might soon be mine.