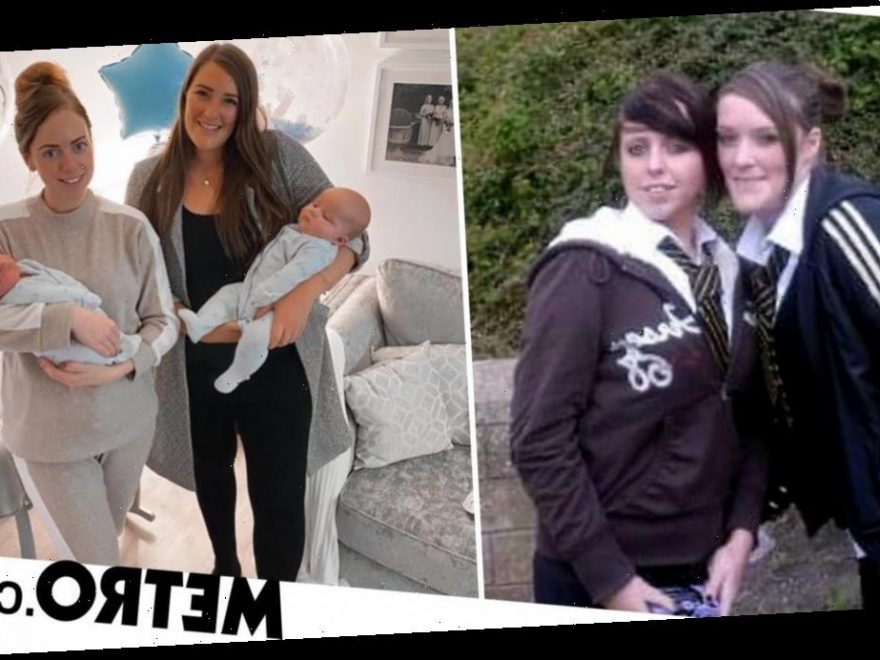 Two women who were childhood best friends have been inseparable their whole lives, and the pair even had their first babies at almost exactly the same time.

From shopping for prom to looking for prams, Chloe Taylor, 28, and Laura Morton, 27, have been joined at the hip for 15 years.

The pair from Crook, County Durham, have hit all their milestones together – such as tying the knot and purchasing a property at practically the same time.

Chloe was the maid of honour at Laura’s wedding which was just two years after Chloe’s.

Laura and Chloe also supported one another during their first pregnancy and gave birth to two healthy boys – just three months apart.

‘We’ve always said we want to be pregnant at the same time but never thought it would actually happen,’ says Chloe.

‘We got married at similar times and purchased our first home – just three years between each other.

‘It only felt right to have babies at the same time too so we could plan together.

‘Laura actually told me she was pregnant before she told her partner Callum as she was in total shock.’

The friends said it was great being pregnant together as they didn’t have the fear of missing out on holidays or nights out, as they were both in the same boat.

‘We planned one another’s baby showers and even had a joint gender reveal which was really fun,’ adds Chloe.

‘You change as a person when pregnant, so it was great to develop with my best friend.’

Laura gave birth to Bobby in August 2020 and Chloe welcomed Oscar into the world just three months later in November.

Both women were induced early as their babies back were in the anterior position – meaning the babies head was down and face facing their back.

‘It is quite freaky how we had similar labours but I was immediately put at ease knowing Laura had been through the same,’ says Chloe.

The foursome frequently goes out with each other on a weekend and have holidayed to Ibiza and Greece together.

‘It would have been really awkward if Laura didn’t like Simon when they first met but thankfully they got on,’ says Chloe.

‘Over the years, our partners have formed a great friendship which isn’t forced by us at all.

‘It is very rare for both of us to go out with just our husbands – unless it is an anniversary.

‘We have a group chat so if we fancy going for a walk, drinks or a meal – we will always ask the other couple.’

The inseparable duo has been on multiple holidays together over the years but it isn’t always sunshine and rainbows.

They have been one another’s shoulders to cry on during tougher times.

‘Chloe is the first person I go to whenever something has happened,’ says Laura.

‘I’ve had grandparents pass away and Chloe has always been there as she is apart of the family. And I am part of hers.’

Laura praises their friendship for never fading away – especially when the pair were separated in 2010.

‘Even when I went to university, Chloe and I remained close friends,’ she says.

‘She got a job and a house then I finished my degree and bought a house which is only around the corner.’

The pair hope their babies have a strong bond like their parents.

‘We were so excited for our babies to meet,’ adds Laura.

‘But you can already tell Oscar is going to be the boss.’

Do you have a story to share? We want to hear from you.

Get in touch: [email protected]