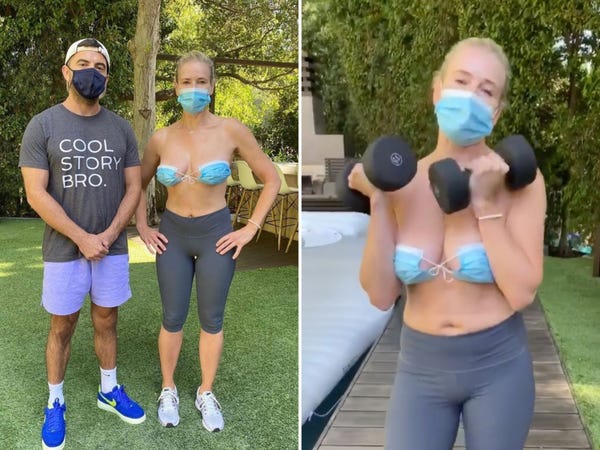 Throughout the coronavirus pandemic, Chelsea Handler has tried to promote mask-wearing by giving a new life to face coverings — including using them to create a homemade bra.

On Sunday, the comedian shared an Instagram photo to wish her personal trainer, Ben Bruno, a happy birthday. Handler wore workout leggings and a DIY sports bra made out of surgical face masks that are tied together in a knot.

Today is my trainer’s @benbrunotraining birthday. I met him 6 years ago and immediately thought—I hate weight training. I was convinced I would only get bigger and bulkier. I hated working out and would cancel more often than I showed up. Then one day, something clicked and I started to see the strength my body was gaining and the fierceness that came with getting your body grit to match your mental grit. Ben annoys the living shit out of me, and I annoy him (less than he annoys me) but we know when to talk and when not to talk. One day I started to cry in a workout, and he sat with me and talked it through, and helped me with a situation I had to deal with. Then he checked in on me later that day. So, for a straight guy who’s into dumbbells, he is a good man, and the best trainer I’ve ever had. I’m 45 years old and finally have the body I’ve been trying to get since I was 25. Thank you, Ben. Thanks for loving my dogs even when they don’t reciprocate. And thanks for putting up with me and my moods—when I don’t reciprocate.

She thanked Bruno for comforting her during training sessions and helping her fall in love with working out — something she said she used to despise.

"One day I started to cry in a workout, and he sat with me and talked it through, and helped me with a situation I had to deal with. Then he checked in on me later that day," Handler wrote.

She continued, saying: "I'm 45 years old and finally have the body I've been trying to get since I was 25."

Handler has become famous for her DIY face-mask bra

Handler first featured the face-mask bra in an Instagram video in July, where she was shown doing lunges and lifting weights with a mask over her mouth and nose.

In the video, Handler lunged toward the camera and said: "Everybody needs to find a mask and put it on because I'd like to have fun again, OK?"

"People want their kids to go back to school, and we're abusing our healthcare workers. Please find a mask and put it on any part of your body," Handler continued in her video.

While some commenters criticized Handler for seemingly wasting two masks that could have been used to cover the mouth and nose — as recommended by the Centers for Disease Control and Prevention — many of Handler's fans were entertained by her innovative way of mask-wearing.

"The new sports bra," one user wrote. "Watch out, Lululemon."

In April, the TV personality also promoted mask-wearing with another bra-related video. She taught her fans how to turn a conventional cup bra into a face covering.

"With masks in short supply, we have to take matters into our own hands. Men included," Handler wrote in April.

With masks in short supply, we have to take matters into our own hands. Men included. #corona #diy