A reign-y departure! Prince Charles and Camilla depart rain-drenched Ottawa for the Northwest Territories on the final leg of their visit to Canada to mark Queen’s Jubilee

The Prince of Wales and Duchess of Cornwall departed a rain drenched Ottawa this morning, en route to the Northwest Territories on the final day of their visit to Canada.

The royal couple were escorted to the plane before shaking hands and saying goodbye to city mayor Jim Watson and chief Algonquins of Pikawakanagan First Nartion, Chief Wendy Jocko.

Camilla was first up the stairs on her own closely followed by Charles. 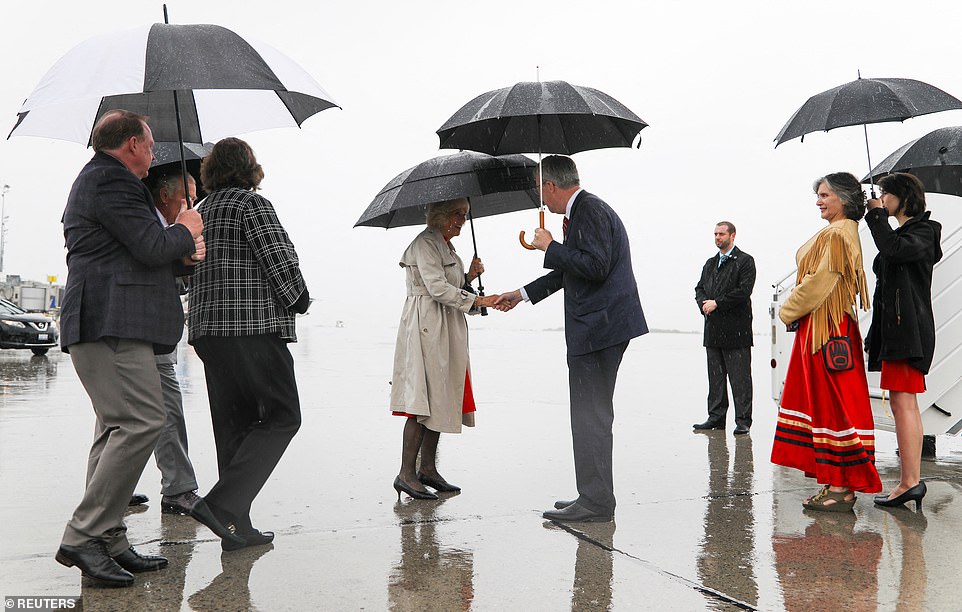 The Prince of Wales and Duchess of Cornwall departed a rain drenched Ottawa this morning, en route to the Northwest Territories on the final day of their visit to Canada 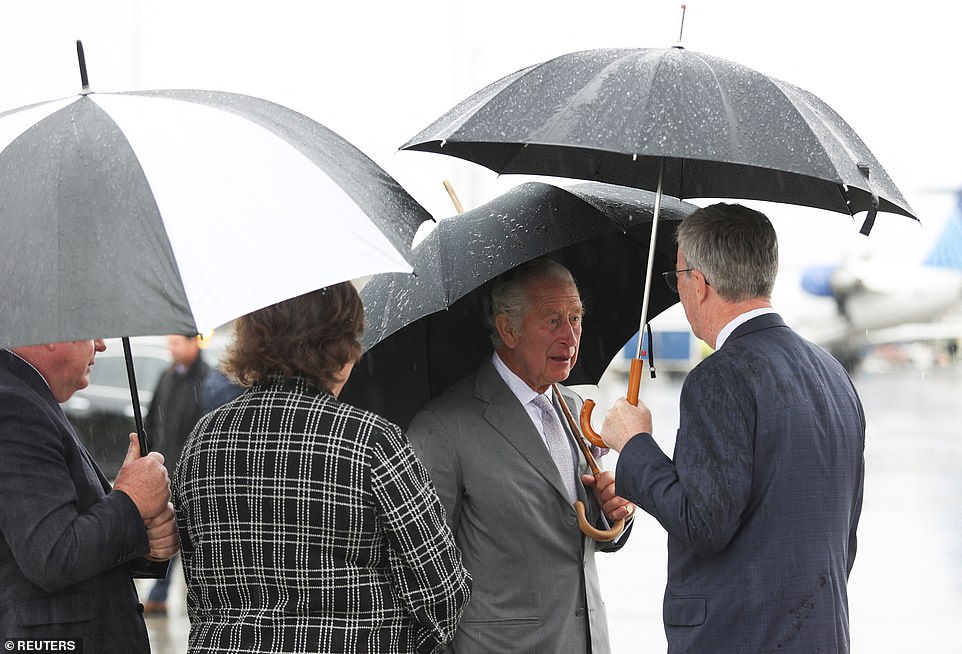 Charles and Camilla boarded their Royal Canadian Air Force plane at 11am local time, saying goodbye to Canadian dignitaries before taking off

The Duke and Duchess sheltered from the rain under umbrellas as they said goodbye to Canadian dignitaries before boarding their plane to Yellowknife.

The action-packed second day of their whirlwind tour of the country was spent visiting a local school, touring a market and watching a performance by the Canadian Mounties.

The royal couple laid a wreath at the National War Memorial and attended a service at a Ukrainian Orthodox Cathedral, where two protesters holding ‘abolish the monarchy’ signs stood on the lawn outside as they made their way inside.

It comes amid calls for Charles to apologise on behalf of the monarchy for the ill treatment of indigenous communities. Charles addressed the issue of reconciliation in his maiden royal tour speech yesterday, saying is time to find new ways to ‘come to terms with the darker and more difficult aspects of Canada’s past’. 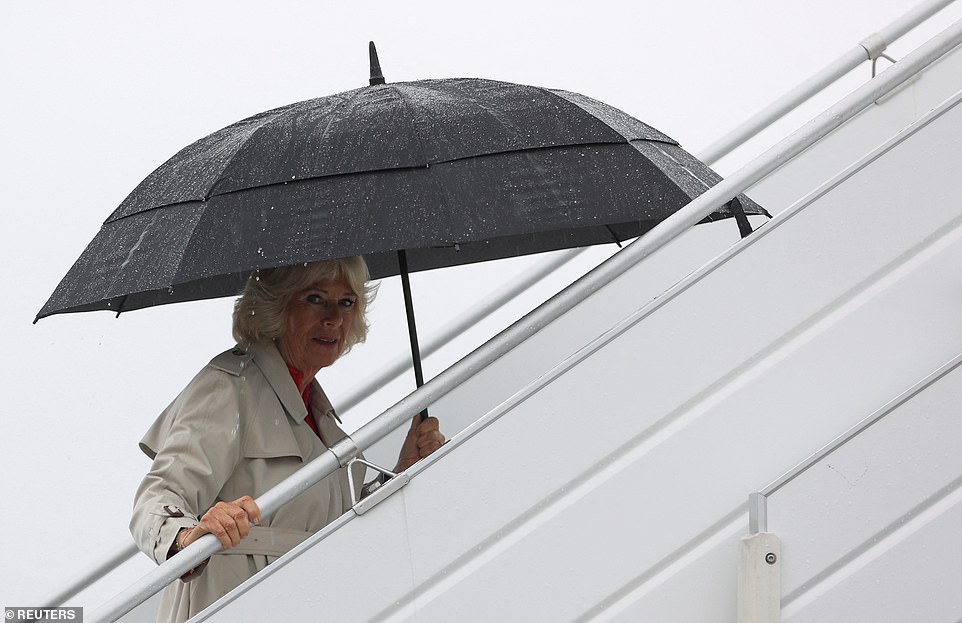 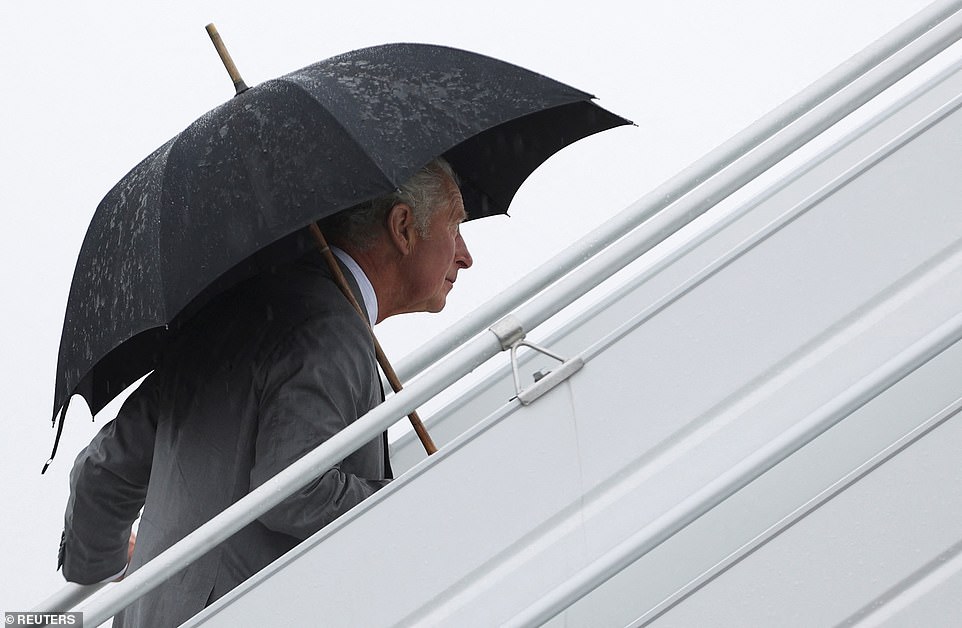 The prince made the remarks after travelling from Newfoundland and Labrador, where he attended an official welcome ceremony at the Confederation Building in St John’s.

He had been urged to apologise on behalf of the monarchy ahead of touching down in Canada on their first day of their tour yesterday.

Cassidy Caron, National Council President of the Metis people, said she intended to raise the issue personally with the heir to the throne when they meet today.

Mary Teegee, executive director of child and family services at Carrier Sekani Family Services in the province of British Columbia, said: ‘They also have to understand that they are not the leaders in our nation,’ adding that recognition of the harms of colonisation are needed rather than just a ‘trite’ apology.

The pressure comes after two recent royal visits to the Caribbean – by the Duke and Duchess of Cambridge and the Earl and Countess of Wessex – attracted criticism for promoting ‘colonialism’ and calls for reparations over Britain’s role in the historic slave trade. 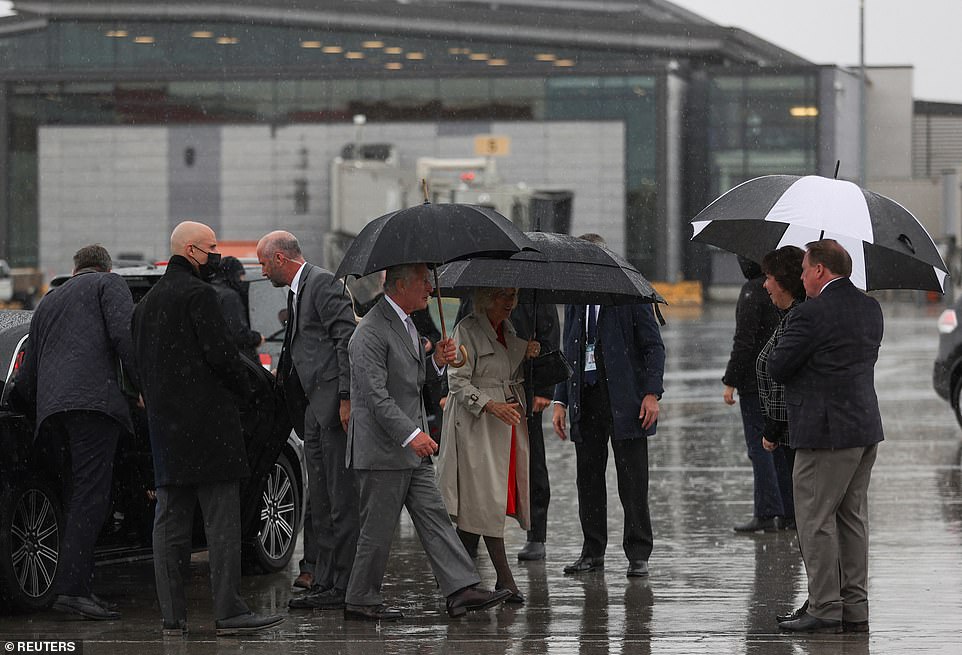 Delivering a speech in both English and French, Charles referred directly to the process of reconciliation in Canada, talking about ‘our collective need’ to come to terms with the ‘darker and more difficult aspects of the past’.

He said: ‘However, as we look to our collective future, as one people sharing one planet, we must find new ways to come to terms with the darker and more difficult aspects of the past: acknowledging, reconciling and striving to do better. It is a process that starts with listening.’

He continued: ‘I have greatly appreciated the opportunity to discuss with the Governor General the vital process of reconciliation in this country – not a one-off act, of course, but an ongoing commitment to healing, respect and understanding.

He added that he and his wife ‘look forward to listening to you and learning about the future you are working to build. ‘

‘As so often in the history of this country and her people, Canadians have embarked on a journey that demands commitment and courage. My wife and I could hardly be more privileged to travel part of this journey with you and we are deeply grateful for your warm welcome, which we will carry with us throughout this entire tour.’

The UK enjoys a warm relationship with Canada, where the Queen is head of state, and whose Platinum Jubilee Charles and Camilla’s three-day visit is designed to celebrate.