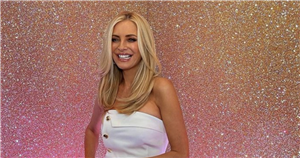 We've grown to love them by their preferred names, so it can sometimes come as a shock when a celebrity reveals their real name.

From Meghan Markle to Jessie Wallace, there's a whole load of celebs who have altered their moniker over the years, whether that's opting to be known as their middle name or changing their surname – or in Sir Elton John's case, changing it legally!

There's some stars who we had no idea had a different name altogether, such as Jude Law and Tess Daly, so here we take a look through some of the celebs who have altered their name…

Strictly star Anton Du Beke, 55, was actually born Anthony, and when he was younger was known to family and friends as Tony.

When his dancing career began to take off, he decided he'd prefer to be known as Anton and carved out his career under the new moniker.

Anton added 'Du' himself later on, but the reason behind it remains unknown.

Strictly Come Dancing host Tess Daly, 51, had to think of a new name when she began carving out a career in modelling, as there was already a star in the industry called Helen Davies.

She swapped it to Tess, and previously revealed the name change was down to her manager at the time: “My agent was obsessed with [the actress] Nastassja Kinski at the time, who was in the film Tess, and thought I looked like her,” she explained.

"So Tess it was. I was gullible and impressionable.”

She has been known as Meghan Markle, 40, since first finding fame as part of the cast of Suits, but Meghan's real name is actually Rachel.

The Duchess' real name is listed on her son Archie's birth certificate, and was read out when she wed Prince Harry in 2018.

Rylan, 33, is one of the few stars known simply by their first name, but it turns out that's not even his real name!

The TV star was born Ross Richard Clark, and adopted the stage name Rylan when he began modelling at the age of 16.

He chose the new moniker when he took a trip to WHSmith and found it in the R section of a baby name book.

When Olivia Colman, 47, began working as an actress, she was forced to adopt a different stage name as there was already an established actress working under the name Sarah Colman.

She selected Olivia, and has gone on to find fame under her name. Olivia told The Independent in 2013: "One of my best friends at university was called Olivia and I always loved her name."

Having signed to Columbia Records when she was just 15, she changed her name to Alicia Keys as a tribute to her love of playing the piano.

Alex Jones, 44, has became a staple to our TV screens having been presenting The One Show for over 10 years now.

However, the host's real name is actually Charlotte but she has carved out a career under her middle name.

This Morning host Dermot O'Leary's real moniker is much longer than his preferred name.

The star, 48, who has an Irish family, follows the long-standing Irish tradition that sees people referred to as their middle name.

In Dermot's case, one of his middle names. His full name is Sean Dermot Fintan O'Leary Jr.

Denise Welch, 63, is another celeb who has opted to be known as their middle name.

Having worked as an actress and TV presenter, we're used to seeing her on our screens and she's instantly recognisable as Denise, but her real name's actually Jacqueline.

When she began performing, she changed her name from Karen to Jessie, in a touching tribute to her late grandmother.

TV chef Gino D'Acampo, 45, has became a household name thanks to his appearances on various shows and huge chain of self-titled restaurants across the country.

While his name is extremely well-known to millions, it turns out Gino's real name is actually Gennaro.

Her mum Amy married Paul Price in 1988, which is where Katie got her famous surname from.

Boris Johnson, 57, is known to millions as Boris, or BoJo, but it turns out the politician's first name is actually Alexander.

He was reportedly known as Alexander when he was young, but as he got older he adopted his middle name as his permanent name in a bid to boost his public profile.

Actor Jude Law, 48, changed his name from David to Jude when he enrolled with a youth drama group in London.

While today he has one of the most recognisable names in showbiz, he has previously admitted he regretted changing his name as when he was younger he would often get mistaken for a girl.

Australian fashion designer Storm Keating, 39, is another famous face who uses her middle name as her permanent name. The star previously revealed her first name is actually Sharyn, but her parents always called her Storm growing up.

Sharing a snap of her birth certificate to her Instagram in 2016, she wrote: “Storm is my middle name and my parents have always called me Storm.

“They made my first name "Sharyn" because they were worried that people might make fun of me… turns out they were right to.

“They took the name "Storm" from one of the novels in Wilbur Smith's first trilogy (a famous South African journalist) because they loved it and have called me Storm since I was born."

For all the latest celebrity gossip, sign up to our daily newsletter here.