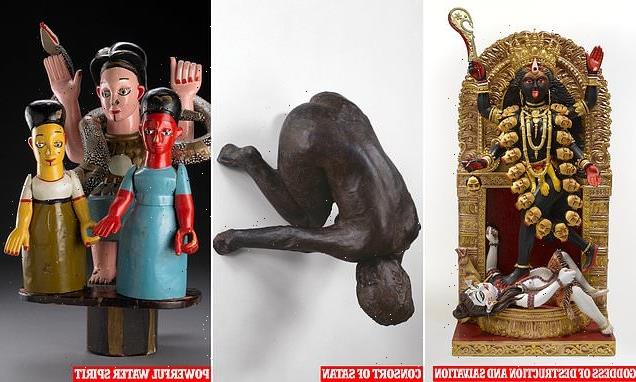 Celebrating ‘divine and demonic’ women! British Museum’s first exhibition on female spiritual beings will explore primordial she-demon Lilith who was ‘consort of Satan’ and Circe who turned men into pigs

From powerful deities to primordial she-demons, a new exhibition exploring how femininity has been perceived across the globe throughout history will be unveiled later this year.

Feminine power: the divine to the demonic is the British Museum’s first ever exhibit on female spiritual beings and will open in May.

Exploring women in world belief and mythological traditions, the figures on display range from a magical Greek enchantress to a Hindu goddess considered the master of death.

The exhibition includes representations of Lilieth, a character from Jewish mythology thought to be the first wife of Adam and later the consort of Satan, as well as Guanyin, the Chinese goddess of mercy.

Here, FEMAIL reveals a selection of the figures behind  of the 70 unique objects which will go on display later this year.

Hindu goddess of destruction and salvation 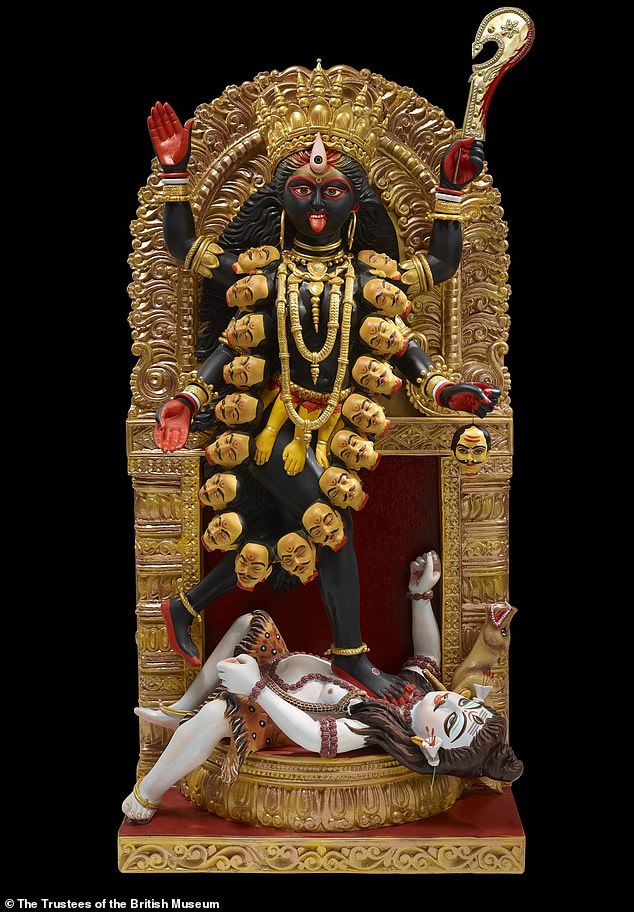 Feminine power: the divine to the demonic is the British Museum’s first ever exhibit on female spiritual beings and will available to visit in May. Pictured, a sculpture of Kali Murti, Kaushik Ghosh, India, 2022

Loved and feared for her formidable power and aggression, Kāli is the Hindu goddess of destruction and salvation.

Transcending time and death, the goddess is thought to destroy the evil to protect the innocent and guide her followers to enlightenment.

According to David Kinsley’s Tantric visions of the divine feminine, Kāli is first mentioned in Hindu tradition around 600 AD, and is regarded as the embodiment of Shakti –  the primordial cosmic energy in Hindu philosophy.

Although superficially terrifying, the bloodied heads that she wears and carries represent her power to destroy the ego, setting her followers free from worldly concerns.

Her belt of severed arms signifies how she liberates followers from the cycle of death and rebirth.

One of the most prominent and widely venerated goddesses in India, the statue of Kali reflects the living tradition of her worship, important for millions of Hindus around the world today.

The newly-acquired icon of the Hindu goddess was commissioned especially for the exhibition by the the London Durgotsav Committee, who run the annual Kali Puja festival in Camden in the goddesses honour. 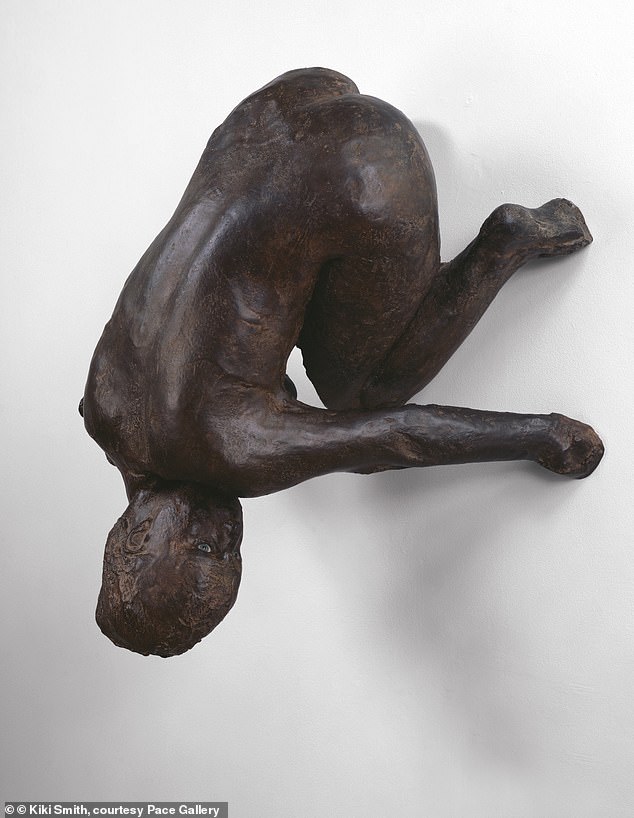 On loan from the Metropolitan Museum of Art in New York for the exhibition is a sculpture of the figure, titled Lilith, cast from the body of a real woman, by American artist Kiki Smith, 1994

Since the late first millennium AD, Lilith has been known within Judaic and Mesopotamian mythology as a primordial demon and the consort of Satan.

The figure, also known as ‘night monster’, is known in Hebrew mythology as the first wife of Adam, who was banished from the Garden of Eden when she refused to obey him.

When God sent three angels to retrieve her, they found her at the Red Sea giving birth to 100 children per day, fathered by various lascivious demons.

After refusing to return to Eden, she was punished by watching 100 of her children die daily and was condemned to be Satan’s wife.

For example Lilith, The Legend of the First Woman, written by Ada Langworthy Collier in 1885, freely changes the legend of Lilith which portrays her as a victim of Adam and a misunderstood figure.

On loan from the Metropolitan Museum of Art in New York for the exhibition is a sculpture of the figure, cast from the body of a real woman, by American artist Kiki Smith.

The exhibition will also include a ceramic incantation bowl from 500-800 AD Iraq, featuring a rare early image of Lilith in female form. These bowls were buried upside down underneath houses to protect their owners from demonic forces. 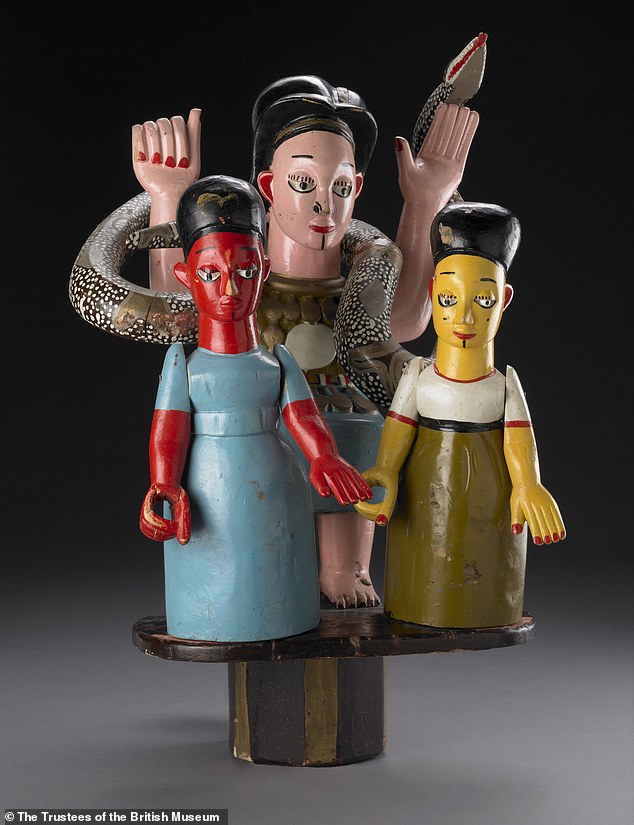 Mami Wata is recognised as a powerful a water spirit and is usually represented as a snake charmer or a mermaid.. A headpiece from Nigeria, early 1900s, painted wood and metal

Mami Wata is recognised as a powerful a water spirit and is usually represented as a snake charmer or a mermaid.

She is celebrated throughout Africa and associated with health and wealth, love, and good fortune. The spirit is also linked with curing problems of infertility.

According to the Smithsonian National Museum of African Art, her origins can be traced to a late 19th century lithograph of a female snake charmer in Hamburg, Germany.

This image was then reprinted in an Indian calendar which circulated widely in western and central Africa, with the figure soon becoming a symbol inscribed with the identity Mami Wata.

Devotees who linked the figure to wealth and health established shrines in the spirit’s honor and developed various rituals of worship which varied from region to region.

A wooden Mami Wata figure with snake entwined in arms, thought to be created in Nigeria in the early 20th century, will be displayed as part of the exhibition. 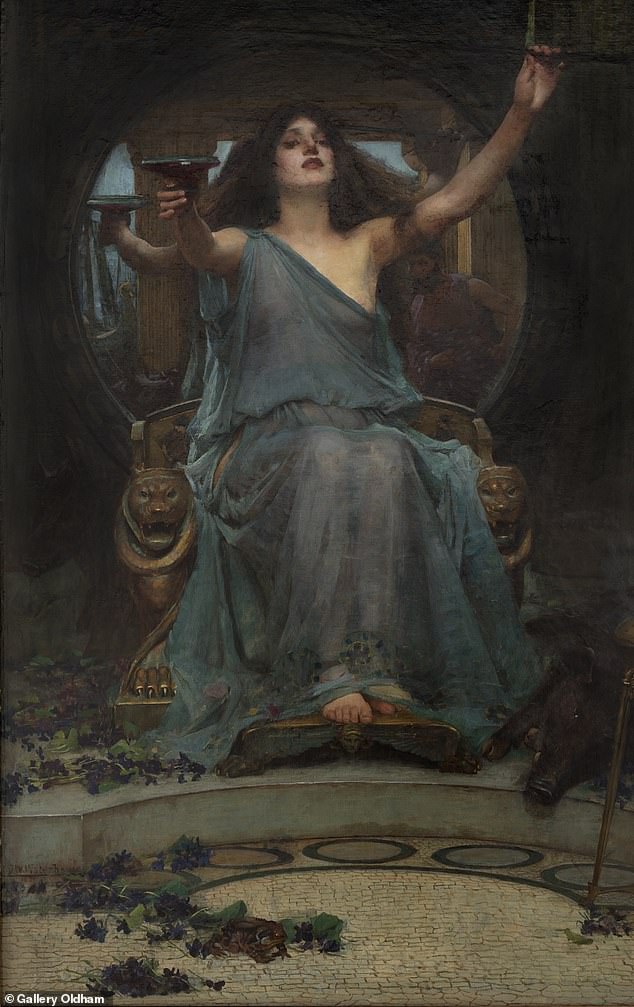 The exhibition will feature a painting by British artist John William Waterhouse of Circe offering Ulysses a cup in her home, 1891, oil on canvas

Described as ‘lustrous nymph with lovely braids’, Circe is a sorceress and minor goddess in Greek mythology.

Thought to be the daughter of the sun god Helios and ocean nymph Perse, she was known for her knowledge of herbs and potions – and tendency to transform those she disliked into animals.

In Homer’s Odyssey, the protagonist Ulysses visits her home on the island Aeaea, where the enchantress swiftly transforms his men into pigs.

But Odysseus resists her magic using a herb gifted to him by the god Hermes, causing Circe to invite him into her bed and care for him, eventually releasing his men from her spell.

However while enjoying Circe’s hospitality Odysseus loses sight of his goal of returning to Ithaca and spends a year in her home with his men before returning to his mission.

Some critics believe Circe symbolises the dangers of excess and pleasure in Homer’s famous epic.

The exhibition will feature a painting by British artist John William Waterhouse of Circe offering Ulysses a cup in her home. 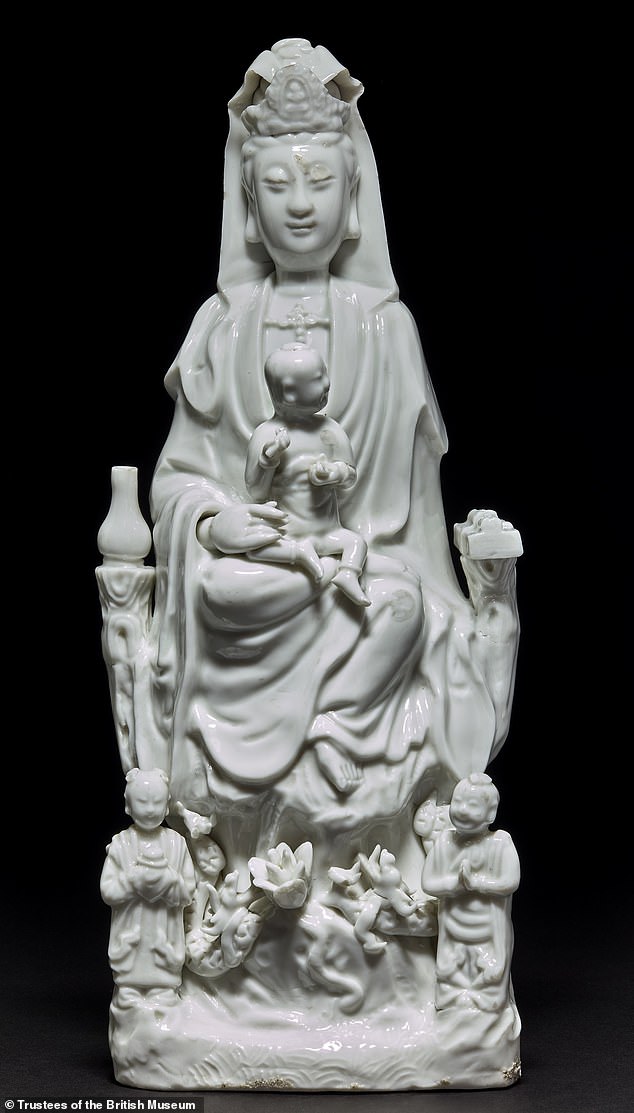 Bodhisattva Avalokiteshvara, or Guanyin, is the Buddhist goddess of mercy who is considered to be the physical embodiment of compassion. Pictured, Guanyin with child and attendants, China, 18th century, porcelain

Bodhisattva Avalokiteshvara, or Guanyin, is the Buddhist goddess of mercy who is considered to be the physical embodiment of compassion.

Guanyin is the Chinese translation of Avalokiteshvara, while in the Buddhist religion, bodhisattvas are enlightened beings who chose to stay on earth as examples for the faithful to follow.

She is considered as savior of humankind who guides all equally regardless of age, gender, or social class – harbouring powers to change form and aid those who pray to her, according to the Lotus Sutra.

The goddess was originally depicted as a male or gender-neutral entity, able to take form in various different manifestations, however in imperial China became increasingly cemented as a female figure.

According to Yale University Art Gallery, the Guanyin has been an important deity in Buddhism from around the sixth century C.E.

While represented in various manifestations and throughout Asia, Guanyin is usually depicted with a small seated Buddha within her headdress. 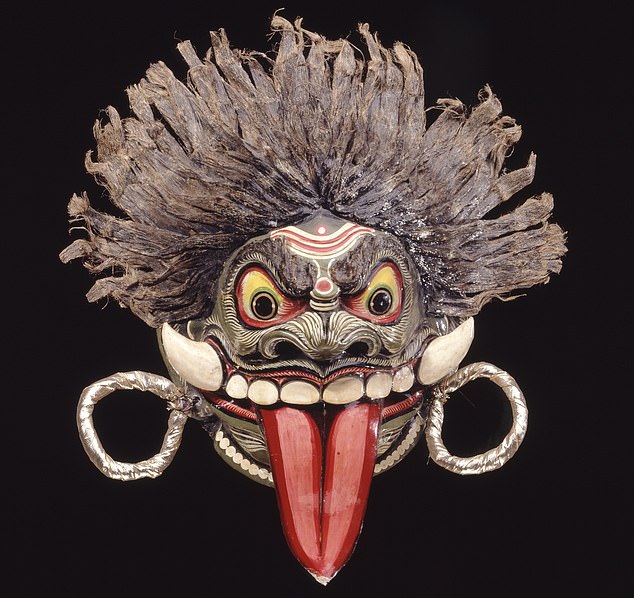 Made in 1994 by Sri Kajal Datta, this fearsome dance mask depicts the demoness Taraka from Valmiki’s epic The Ramayana

From one of the largest ancient epics in world literature, Tataka is a beautiful woman who was turned into a bloodthirsty demon after trying to seduce a holy sage.

Valmiki’s The Ramayana includes the tale of a Yaksha princess called Tataka, who was seduced and married by Sunda, with whom she had children, Subahu and Maricha.

When a revered sage of Hinduism called Rishi Agastya cursed her husband to die, Tadaka and her son Subahu vowed to take vengeance on the sage.

When she tries to trick the Agastya by seducing him, he cursed both Tataka and her son to lose all of their beauty and to be transformed into hideous, demonic creatures.

Tadaka and Subahu spent their time killing people, terrorising religious ceremonies and harassing as many rishis as they could until one, Vishwamitra, approached the king for help.

The King sent two of his sons, Rama and Lakshmana, to protect Vishwamitra and when Tadaka and Subahu came to terrorise the sage again, Rama slayed both mother and son.

The Citi exhibition Feminine power: the divine to the demonic runs from 19 May to 25 September 2022 in The Joseph Hotung Great Courty Gallery at the British Museum