From the outside, it appeared Alice Feeney was living every author’s dream.

After almost 10 years of rejection, her debut novel, Sometimes I Lie was snapped up by publishers and became an international best-seller. It’s now being made into a TV series by Ellen DeGeneres, starring Sarah Michelle Gellar.

But British writer Feeney was plagued with a sense of anxiety that left her unable to fully believe – or enjoy – her success.

Now, days before the release of her second novel, I Know Who You Are, Feeney opens up about how imposter syndrome threatened to derail her career before it had even started – and how she copes with her anxiety today. 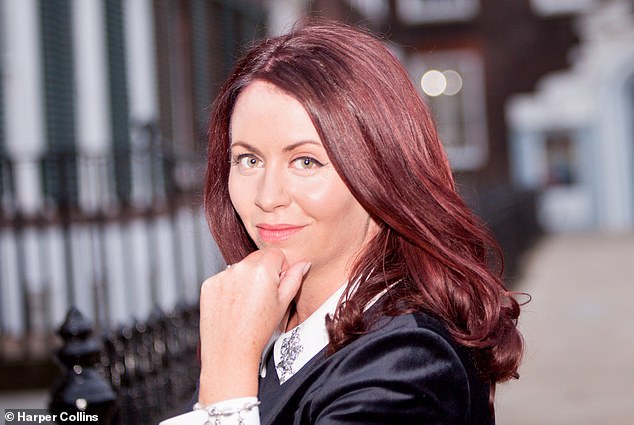 British author Alice Feeney, pictured, whose best-selling debut novel Sometimes I Lie, reveals her struggle with imposter syndrome ahead of the release of her second novel 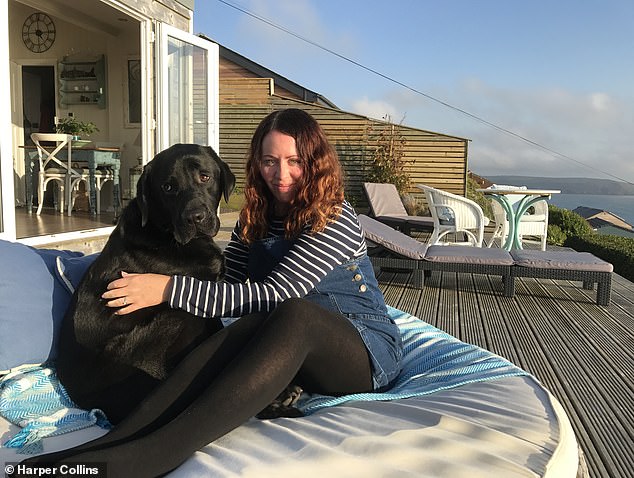 The writer, pictured with her Labrador, reveals how she initially struggled to accept a literary agent wanted to represent her following almost a decade of rejection

When I was asked to write about anxiety, I’ll admit it made me feel a little anxious. I tend to keep myself to myself. I’m not a full-time hermit (yet), but I’ve always been shy, especially with strangers. When I meet people and they ask what I do, I just tell them I work from home. I rarely say I’m an author, perhaps because I sometimes still struggle to believe it myself.

It’s not a lie, I do work from home. I spend most days in my garden shed, with just my dog and my characters for company. It’s where I am most happy. I think I’ve always used books as a form of escape from the real world, both by reading and writing them. Before I was published, I wrote on my commute to work, in my lunch breaks, and at weekends. But it felt like a dirty secret, and one I rarely shared.

After almost ten years of rejections from literary agents – some of which felt worse than heartbreak – everything changed when I wrote Sometimes I Lie. Fifteen agents asked to read the full manuscript, and when my dream agent got in touch, I was convinced it was a mistake or a trick of some kind. 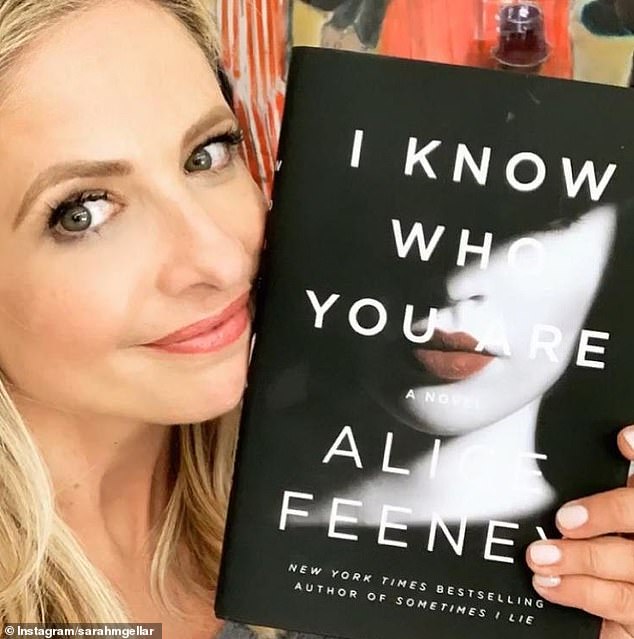 Her debut psychological thriller is now being made into a TV series by Ellen DeGeneres, starring Sarah Michelle Gellar. Pictured, the actress with Feeney’s second novel

He invited me to his office, and when he said he wanted to represent me I didn’t believe him at first. I remember explaining that I didn’t fit with the rest of his client list, (he represents a lot of big authors), as though trying to talk him out of it.

Getting the best agent in town was honestly one of the happiest moments of my life, but my joy soon turned into fear. I concluded it was only a matter of time before he came to his senses and changed his mind. I had wanted to sign a contract there and then, but he reassured me that once he had shaken hands on a deal, he never went back on his word. That made me feel a bit better until, on the train home, I realised we never shook hands. It was the first thing I did as soon as I saw him a few days later, I’m not sure I ever explained why.

What is imposter syndrome?

Impostor syndrome is not in fact a ‘syndrome’ in the clinical sense, but rather a term coined to describe a nagging feeling of self-doubt and fear that a person is not what people perceive them to be.

Impostor syndrome was first described in a 1978 study that defines the phenomenon as ‘an internal experience of intellectual phonies, which appears to be particularly prevalent and intense among a select sample of high achieving women.’

I’ve always thought that if something seems too good to be true it probably is, so nothing that happened that day, or since, has ever felt terribly real to me. When my agent called to tell me that several UK publishers wanted to buy my book, I was convinced he had dialled the wrong author by mistake, or that it was a dream. I didn’t tell anyone my news at first, perhaps because if I struggled to believe it, why would they?

Auctions in America and Germany followed a few days later. After being told so often that I’d never make a living from writing, I was suddenly being offered life-changing amounts of money, enough to mean that I could write full-time. Dreams I didn’t dare dream started to come true, but I still feared it was only a matter of time before it all got taken away, or everyone asked for their money back.

A couple of months after signing with HarperCollins in the UK, I was invited to my first author event, which seemed absurd because I still didn’t feel like one. A glass of champagne helped ease my anxiety a little, but then I found myself alone in a room full of strangers.

I have never been good at mingling; I prefer to hide in the corner. A woman I’d never met asked if I was an author and I froze. It sounded like a trick question. ‘Yes,’ I replied eventually, instantly feeling like a fraud. When she asked me what I had written my mind went completely blank and I couldn’t answer. 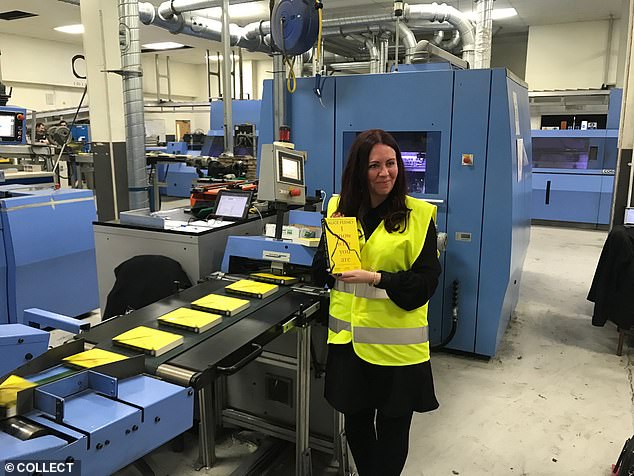 Feeney describes holding a copy of I Know Who You Are fresh off the press, pictured, as ‘nothing short of magic’. The novel will be released this week 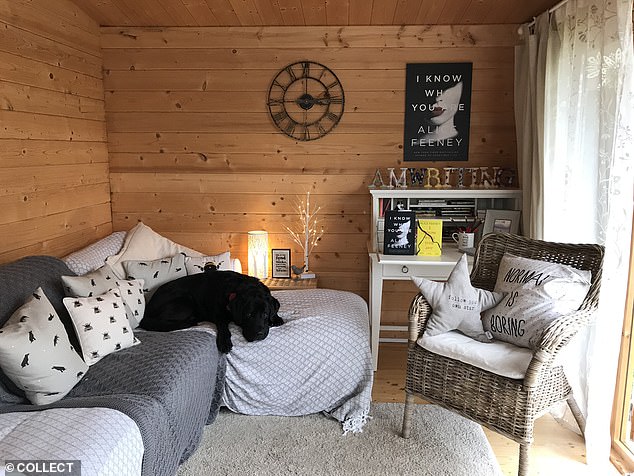 The author spends much of her time working in her garden shed, pictured, and often feels more comfortable saying she ‘works from home’ than describing herself as an author

‘Any pets?’ she asked in a tone adults usually reserve for children. I told her about my dog, a giant Labrador who is scared of feathers. Then I explained that my first novel might be out the following year if everyone didn’t change their minds. ‘It’s terrible what imposter syndrome can do to a person,’ she said with a kind smile.

I Googled the term on the train home, and it was the first time I realised that other people had experienced exactly the same fears and feelings as me. A lot of them were very successful. Kate Winslet, Tom Hanks and Lady Gaga, have all spoken publicly about feeling as though they didn’t deserve their success at times, and living with the fear of being exposed as a fraud. Some say the self-doubt is what drives them. Even Albert Einstein experienced imposter syndrome.

Despite all my worst fears, my agent and my publishers didn’t change their minds. Sometimes I Lie was a bestseller, and is currently being made into a TV series by Ellen DeGeneres and Warner Bros. starring Sarah Michelle Gellar. I’ve been incredibly lucky, but when the real world gets too loud, I still disappear inside my books. A thick skin worn too often can start to develop holes. 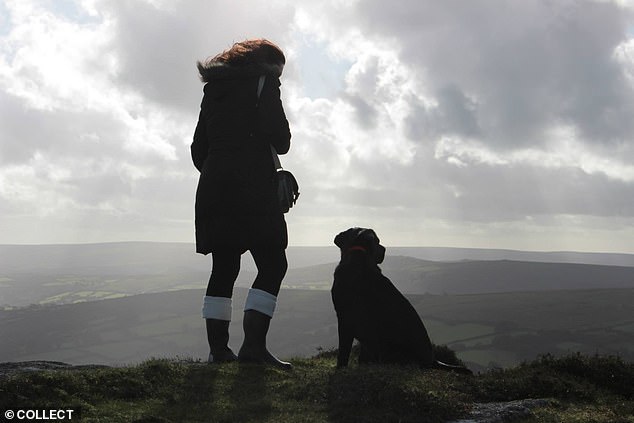 Feeney told how she has used books – both reading and writing them – as an escape from the ‘real world’. Pictured, on a walk with her beloved dog

With I Know Who You Are about to hit the shelves, a recent visit to the printers was the first time it felt real to me. Holding the very first copy, literally hot off the press, was nothing less than magic.

If you happen to hold a copy yourself one day, I hope you enjoy it. Readers are my superheroes, without them my dreams would never have come true.

I think writing a novel about someone who suffers from anxiety helped me to understand my own. The only bad thing about having the best job in the world is the constant fear of losing it. I wrote this piece because I wanted to share that it’s OK to doubt yourself, and being shy doesn’t mean you can’t follow your dreams. The secret is to never give up.

I Know Who You Are by Alice Feeney is published on 16th May.