As the bride, Lady Gabriella Windsor might have expected to be the centre of attention in her wedding photos.

But the radiant newlywed, 38, was almost upstaged in one of her official snaps by an adorable pouting bridesmaid.

Aurelia del Drago, one of six girls who accompanied Lady Gabriella down the aisle, is seen frowning in one of the two formal portraits released by the royal family today.

The little girl, a descendant of European aristocracy on both sides, is joined in the bridesmaid line-up by a trio of nieces, a family friend and the granddaughter of Lady Annabel Goldsmith. 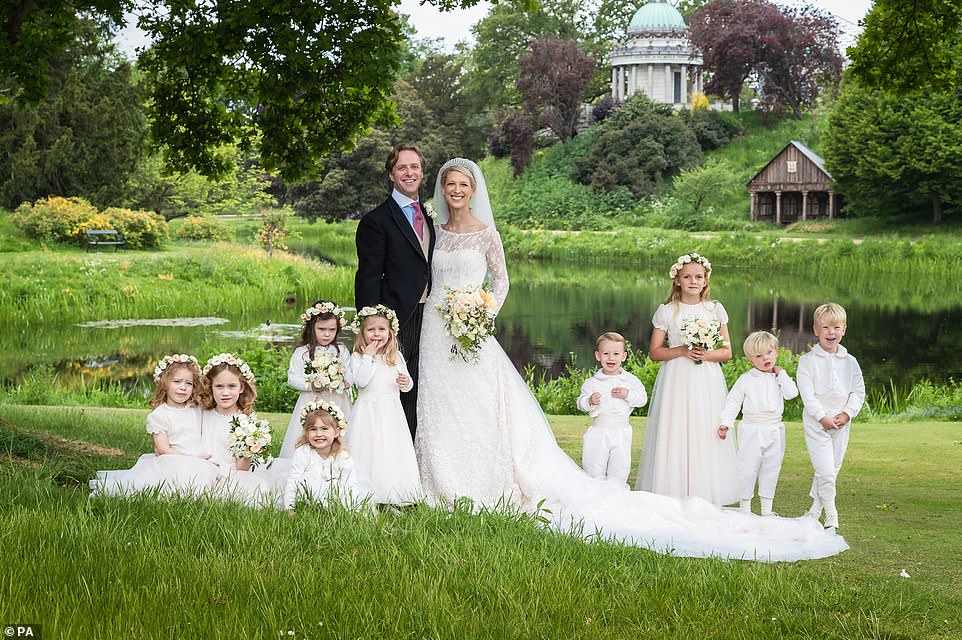 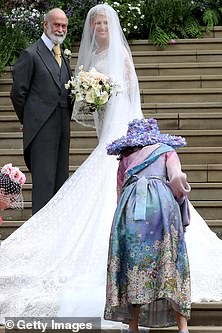 See more from the designer

Lady Gabriella Windsor and Thomas Kingston tied the knot in London this weekend, and of course we're keen to know all the details about the most important element of the day: the dress!

The bride turned to designer Luisa Beccaria to create a custom lace gown for the big day. The dress is made using entirely Valencienne écru lace layered with ribbons of flowers and buds, finished off beautifully with a six-meter long veil. Designs for the dress began back in January of this year, so it's been months in the making!

Forget the venue, flowers and photographer. Your dress is one of the biggest decisions you've got to make when planning a wedding so it's got to be right! While you can't shop Lady Gabriella's exact dress, you can take inspiration from this gorgeous silhouette and snap up a similar design from our carousel (right).

From Galvan's big money buy to Raishma's budget-friendly offering, we've lined up lace wedding dresses aplenty for you to peruse. 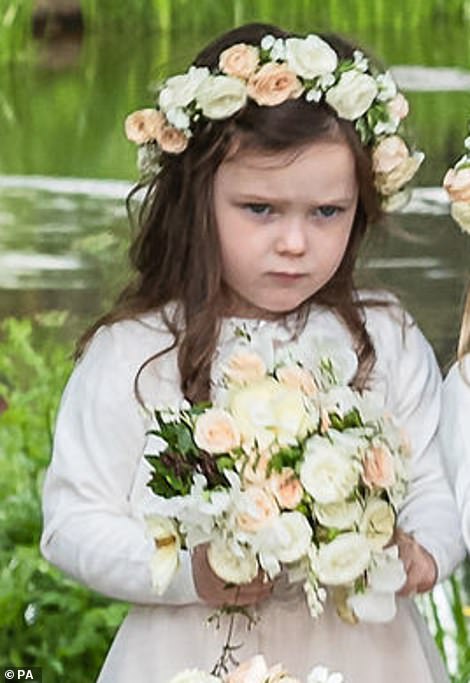 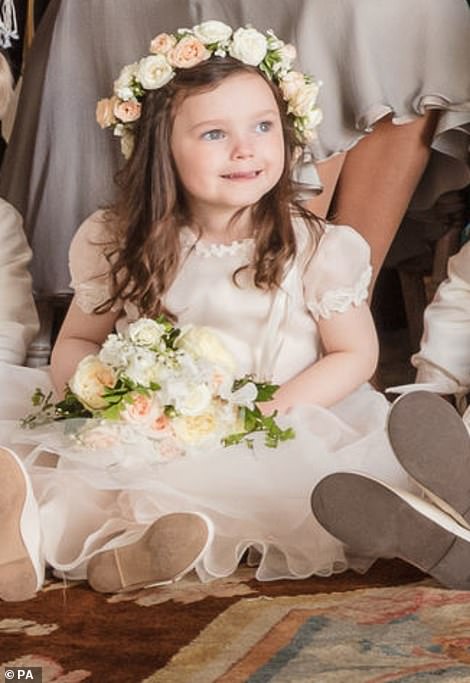 All eyes are drawn to little Aurelia, who scowls away from the camera while clutching her bouquet firmly in both hands, left. Pictured right, Aurelia appeared in much better spirits for the second sitting and smiles brightly for the camera 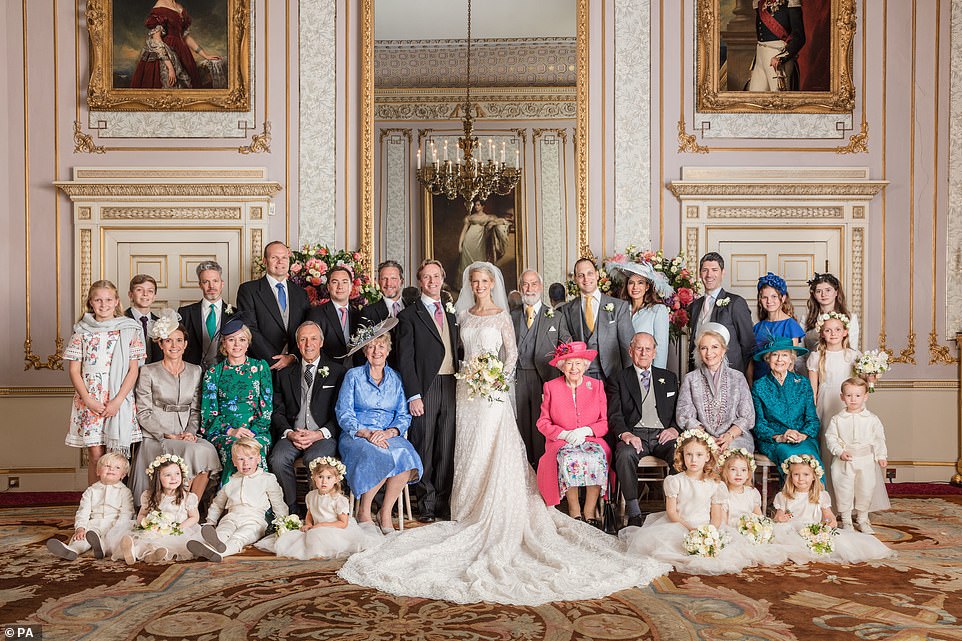 All eyes are drawn to little Aurelia, who scowls away from the camera while clutching her bouquet firmly in both hands. However she looks much brighter in the second group portrait released.

Aurelia is the daughter of Marcantonio del Drago and his wife, Giada del Drago, who tied the knot in a lavish ceremony in Prague in July 2015.

Marcantonio is a descendant of the ancient Italian del Drago family, while Giada was born Dobrzensky de Dobrzenicz, of the modern-day Czech Republic. On their wedding day proud groom Marcantonio proudly revealed their families had known each other for four generations.

Their connection to Lady Gabriella and her new husband is not known but it is possible they met through the bride’s mother, Princess Michael of Kent, who is a descendant of European aristocracy.

Giada, who works as a yoga teacher and a lifestyle coach, shared a photo of her daughter from the royal wedding on Instagram, writing: ‘Little Wonder. Little Bridesmaid’. 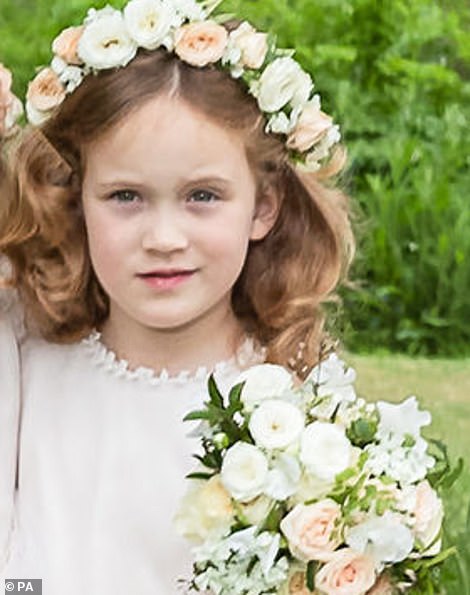 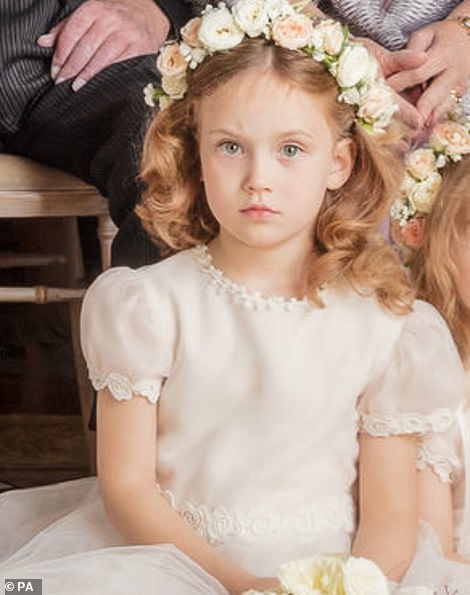 Maud Windsor is the eldest daughter of the bride’s brother Lord Frederick Windsor, 40, and his actress wife, Sophie Winkleman, 38. In both photos the five-year-old sits side-by-side with her lookalike little sister, Isabella

Maud Windsor, five, is the granddaughter of Prince and Princess Michael of Kent and is the eldest daughter of the bride’s brother Lord Frederick Windsor, 40, and his actress wife, Sophie Winkleman, 38.

She was born in Los Angeles in August 2013 and later baptized at the Royal Chapel, at St James’s Palace, wearing the royal christening gown.

Maud had practise at her starring role ahead of her aunt’s big day. The confident five-year-old served as bridesmaid to godmother Princess Eugenie at her wedding to Jack Brooksbank at St George’s Chapel, Windsor Castle, in October last year.

In the official portraits she is seen sitting side-by-side with lookalike sister Isabella. 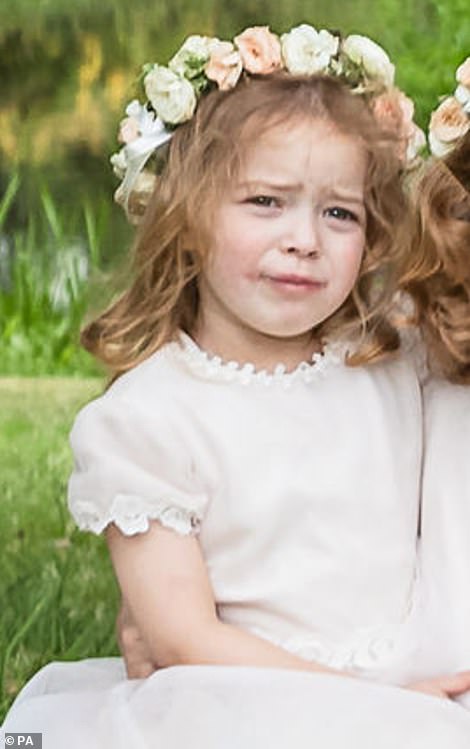 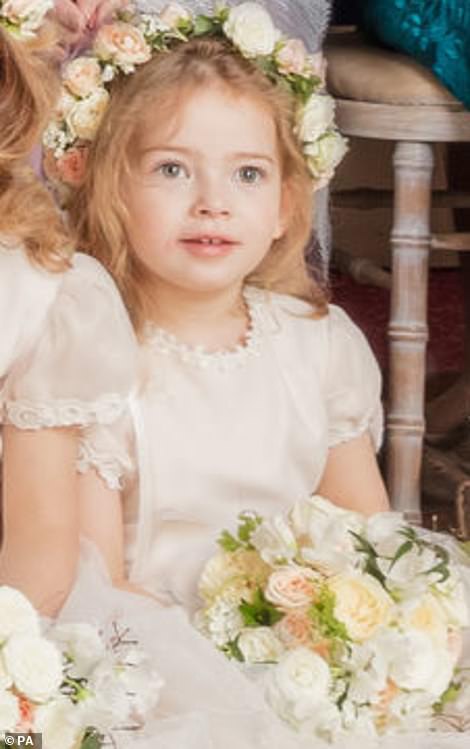 Isabella, the youngest child of Lord Frederick Windsor and Sophie Winkleman, holds onto her big sister for reassurance in the photo taken in the grounds (left). However she appears much more confident while posing for the family shot inside, right

Isabella, the youngest child of Lord Frederick Windsor and Sophie Winkleman, was born at London’s Chelsea & Westminster Hospital on 16 January 2016.

She became Prince and Princess Michael of Kent’s second grandchild.

Isabella was Christened at the Chapel at Kensington Palace in June of that year. She was dressed for her special day in the same christening robe that both Princess Charlotte and Prince George wore for their ceremonies.

It is understood restaurateur Jamie Oliver was among those chosen as godparent. 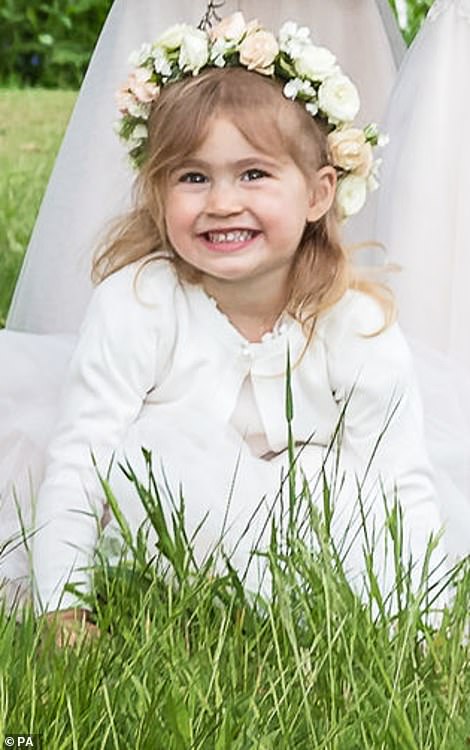 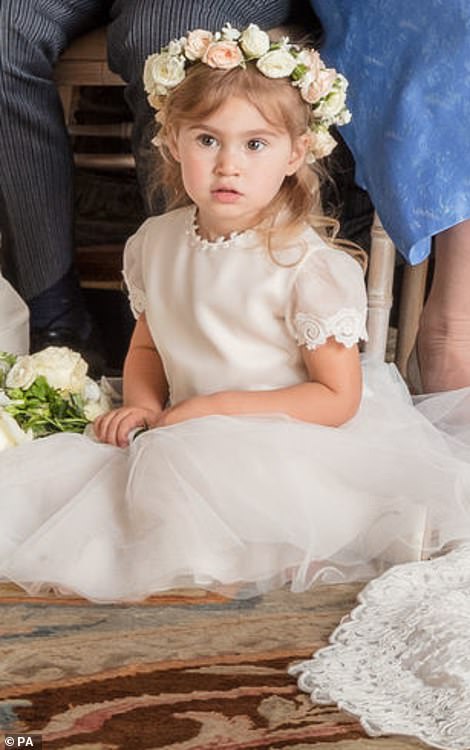 Beaming Eliza Goldsmith, the daughter of Ben Goldsmith, 38, and his second wife, Jemima Jones, 32, is the picture of confidence in the outdoor shoot (left). Inside she looks just as well-behaved as she gazes to something off camera

Little Eliza is the eldest daughter and only child of financier Ben Goldsmith, 38, and his second wife, Jemima Jones, 32.  The couple wed in 2014 and welcomed daughter Eliza two years later.

The Goldsmiths have long been friends with the Windsors. Ben’s mother, Lady Annabel Goldsmith, 84, is the godmother of Lady Gabriella’s brother, Lord Frederick Windsor.

Several members of the family attended, including Ben’s sister Jemima Khan, who posted about the wedding on Instagram. 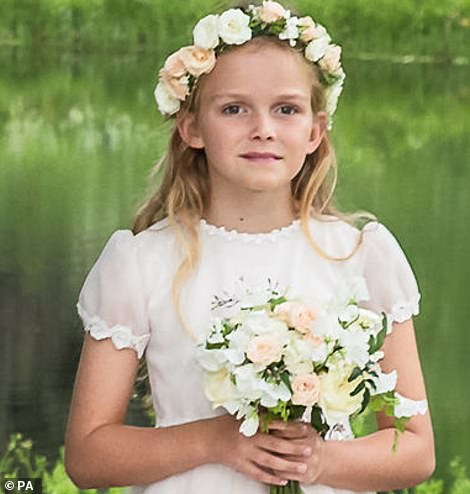 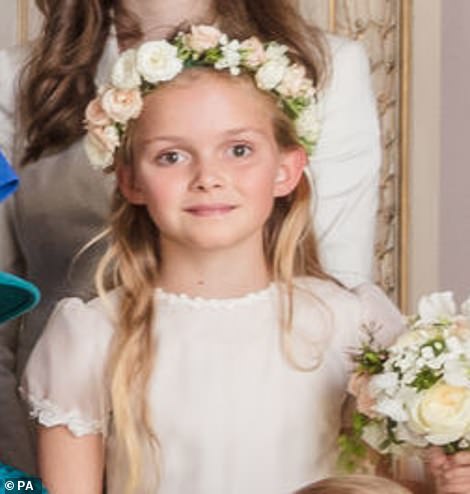 Emily Conolly was trusted with standing with the page boys on the left of the bride and groom in the outdoor photo, left, while the other bridesmaids were seated on the right. Right, inside she was stood at the end of the row next to Princess Alexandra

The eldest of the six bridesmaids, Emily Conolly is believed to be the daughter and youngest child of Mr Kingston’s sister, Joanna Conolly (nee Kingston).

She was trusted with standing with the page boys on the left of the bride and groom in the outdoor photo, while the other bridesmaids were seated on the right.

Her sisters, Jessie and Hannah, were Special Attendants of the bride, while her brother Ben was also included in the family portrait.

Her grandfather, Martin Kingston, the father of the groom, is a lawyer. He runs a charity with his wife, Jill Kingston. 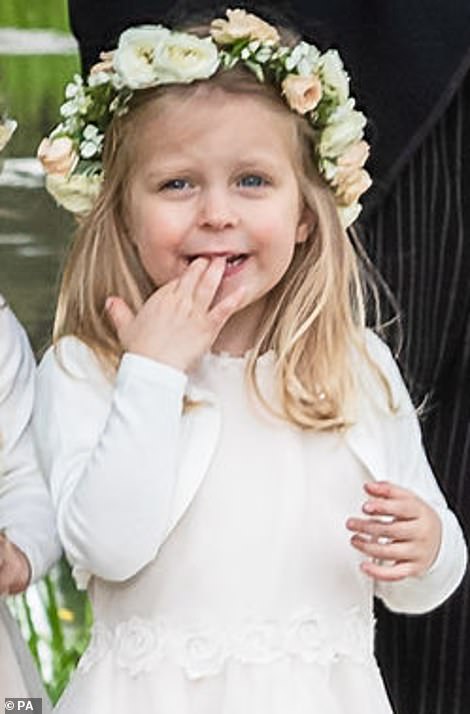 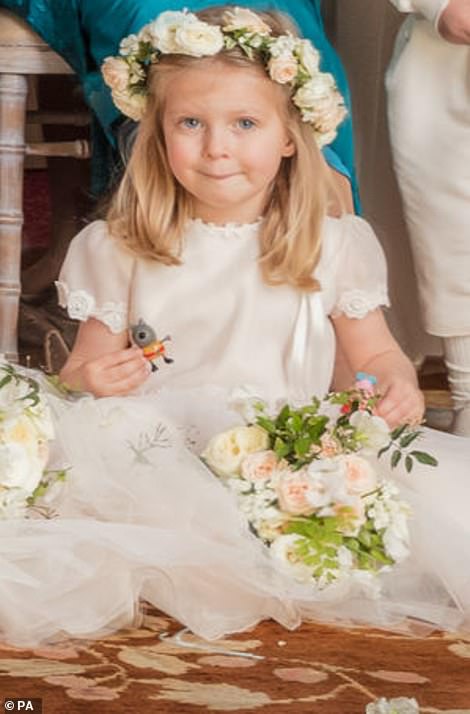 Leonora Weisman is seen playfully chewing on her right hand in the photo taken outside, left.  Meanwhile in the family snap taken indoors Leonora smiles sweetly at the camera – perhaps because she appears to be playing with two Peppa Pig toys

Little is known about Leonora Weisman, who is the sixth adorable bridesmaid seen in the photos.

She is seen playfully chewing on her right hand in the photo taken outside.

Meanwhile in the family snap taken indoors Leonora smiles sweetly at the camera – perhaps because she appears to be playing with two Peppa Pig toys.