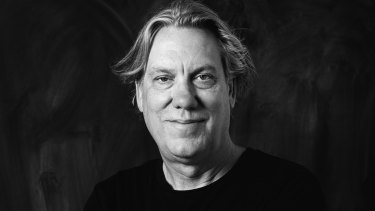 “It felt good to go from being a complete misfit to suddenly being cool and desirable.”Credit:Jesse Hunnford

My earliest memory of my mother, Marilyn, was of her crying over the kitchen sink a day after my third birthday. I hadn’t seen her cry like that and wondered why, as it was supposed to be a happy time. She looked at me and said, “Someone just shot the president.” I’ve never forgotten the look in her eye.

Mom was unusual as an American woman in the 1960s – she was back in the workforce when I was five years old. We were a blue-collar, lower middle-class family. There was nothing fancy about us.

I have two older half-sisters, Stephanie and Paula, from my mother’s relationship before she met my dad, Roger, who passed away 18 years ago.

I didn’t grow up with my sisters, so it’s not the same relationship I have with my younger brother, Peter. They’re more like cousins, people I see once in a while; I wouldn’t say they had a crucial influence on my life.

I was the first teenage boy in the US to study feminism. This was at John Marshall High School, Milwaukee, in 1975. A teacher, Jane Mace, introduced the course as her condition for continuing on after she wanted to retire. Jane was an old-school feminist who was into Germaine Greer.

I had a very close friend at primary school called Cindy who died two years ago. We met aged 11 and remained close. Losing her was a shock. You can always make new friends but you can’t make an old friend.

My first kiss happened at 15. A girl walked past the school music room and noticed me. I knew she was interested because she looked right at me. It became apparent that playing guitar was a good way to meet girls. My first sexual experience was also a direct result of meeting a girl through music.

Singer Patti Smith was my hero. She played in Milwaukee in 1977 and I was in the front row. When she finished her set, I snuck backstage through this door I’d spotted. Patti and I came face to face, staring each other down. I was hoping she’d invite me to have a drink, but instead she called out “Security!” I tailed it out of there. I met her again when Violent Femmes played a gig with her two years ago. I didn’t tell her what had happened.

I had several long relationships in the ’80s, but at the same time I was a touring musician and the success of Violent Femmes meant I had other things on my mind. The relationships I was in weren’t stable or committed – that doesn’t happen in your early 20s, I’m sorry to say. It felt good to
go from being a complete misfit to suddenly being cool and desirable.

I married my first wife, Louise, in 1988. She was an Italian journalist and model. We had a good time together and got divorced five years later.

I met my current wife, Varuni Kulasekara, after a gig in Baltimore in November 1994. At the gig I recited some Edgar Allan Poe poetry – I think that struck her fancy. She asked for an autograph and I asked her out for a drink. I remember thinking, “Wow, I could spend the rest of my life with this woman.” We exchanged numbers, spoke regularly, and officially got together in 1995.

Varuni is a scientist and a Buddhist. While working at the American Museum of Natural History, Varuni was sent on an insect-collecting trip to Australia. We went to Tasmania and had this romantic idea to move there. It was the George W. Bush era and I didn’t have much faith in the US, so we got visas and took a punt. We arrived in 2007 and haven’t looked back.

I didn’t know MONA [the Museum of Old and New Art] existed when I moved to Hobart. I came to the attention of its founder, David Walsh, because he was a fan of my band and curious about why I’d given up New York for Tasmania.

As curator for [music and art festival] Mona Foma, I try to include at least 50 per cent women in the program. Women are undervalued in the intellectual and commercial marketplace and the only way to fix that is affirmative action.

This article appears in Sunday Life magazine within the Sun-Herald and the Sunday Age on sale December 15.