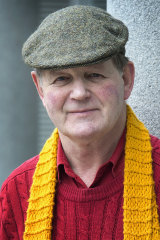 It takes about five minutes of introductory chat with Michael Morpurgo – about walking the Thames Path, which we have both just done to reach the cafe where he has ordered tea and then, of course, about the enduring success of his book War Horse – before we start talking about Brexit. Brexit has been engaging British passions for three years, to the point where many people now effect ennui about it, but you can practically see steam coming out of Morpurgo's ears as soon as it is mentioned.

"I write a lot about Europe," he says. As a child of the Second World War, born in 1943, he played in bombsites as a boy; his mother never stopped grieving for his uncle – killed in the RAF – while his parents split up after the years of forced separation. As a writer, he has repeatedly told stories about war and the folly of war.

"A lot of my books have been set in Germany and France. [Europe is] my place and I don't understand what's going on: I'm puzzled, I'm hurt, I'm upset, and I think it's [happening] basically because this country simply does not understand its history."

Morpurgo has written around 130 books for children, with resounding success; he was knighted for his services to literature and charity last year. War Horse, published in 1982 and turned into a play and then a film by Steven Spielberg, was inspired by an old-timer called Wilf he met in the village pub near his home in Devon. Wilf looked after horses in the First World War.

Eventually, he recalled aloud how intense that relationship was, how he would go to the spot where the horses were tethered at night to talk to them, confessing the terror and homesickness that could not be spoken aloud to his fellow soldiers.

"He said 'I would cry often, because it was the only place I could cry and the only person I could cry with'. He would talk about his horse like a person." Morpurgo had read the war poets, but never before met anyone who was there. He went home and told his wife Clare about this encounter with living history. She said "well, you must find out some more".

This country simply does not understand its history.

That was the germ of War Horse, which tells the story of a boy called Albert whose beloved horse Joey is sold to the army when war breaks out. Joey is a strong horse. From the front line he is captured and ends up with a German officer; meanwhile, Albert finds a way to follow and find him.

"Essentially it is a book about reconciliation, about understanding the war was the same for everyone," Morpurgo says. Even adults who have no occasion to seek out children's books know about it, partly thanks to Spielberg's 2011 adaptation which disappointed Morpurgo with its romantic view of British rural life – "I said it had to be dirty; the boots had to be heavy; the work had to be hard and the lives had to be short", he lamented in a conversation on Chatlife – but did make War Horse a household name. Before Spielberg, his book was translated into four languages; after Spielberg, it was available in 48.

"But I have to say," he went on, "the thing that has affected it even more than the film has been the play. The play did much, much more. It gave great integrity to the book, which was wonderful."

The play, produced by the National Theatre of Great Britain with Handspring Puppet Company, is arguably the British theatrical event of this century. First presented in 2007, it is a spectacular but serious, thoughtful but heartfelt version of the story in which Joey, his stablemate Topthorne and a wilful goose are depicted by larger-than-life puppets so well-crafted and manipulated that they seem to represent not simply animals, but the very essence of each animal. 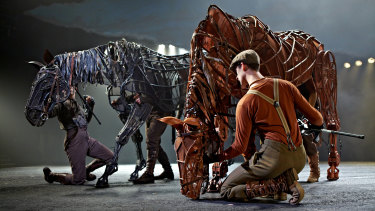 It has been touring since its inception; Morpurgo often travels to see it. When we meet, he is about to see it in Paris. He has already seen it in Berlin, in a theatre once frequented by Kaiser Wilhelm himself.

"It was extraordinary. It was done in German. This play is about family, about reconciliation and all these young Germans knew that. There were moments when it went very, very quiet where it doesn't go silent in England because they were reflecting on how that war was; they have a very different historical memory of it from ours as part of Hitler's war, because he was there. They know it as part of that 20th-century story, what happened in their country."

This is Morpurgo's beef with Brexiteers: that anybody familiar with that 20th-century story could fail to understand the importance of European union. "We fought two world wars and they both had their origins in Europe. It has nothing to do with this deal or that deal, I couldn't give a thingy about all that. What it's about is keeping the peace. And that is never mentioned."

Underlying the demands for sovereignty, he sees an unfurling nostalgia for Empire. "I don't think people speak about it, but it's in the echo. Some people want to get back to that kind of world, without any understanding of what that world was really like and what it did to other people. I just think we have to tell our history as it was. And the more we do that the more we're going to understand what others think about us: the good, the bad and the ugly."

Only better education will allow the next generation to become more open-minded than this one. Morpurgo admits he was a bad student, but he believes fervently in education. "If we don't get the teaching right and the education right, we're on a hiding to nothing really – whatever country we're part of."

Early in his eight years as a teacher – a job he took because he could think of nothing else to do, but which he grew to love – he discovered his power to spin a story. Usually he read aloud to the students, who were 11 years old and hard to engage; one day, he decided to make something up.

He went on telling stories after he and his wife, who was also a teacher, moved to Devon to start Farms for City Children – a charitable organisation that offers children from inner-city schools a week of mucking out cow sheds, feeding pigs and going out in all weather.

"It really lifts your spirits because you know that most of what they're seeing they are seeing for the first time in their lives. They don't like it all, but they're dealing with it all. And they deal with some of the important things. They see lambs being born alive and lambs being born dead. So they have to confront issues which children are not normally expected to confront, as well as seeing great beauty." 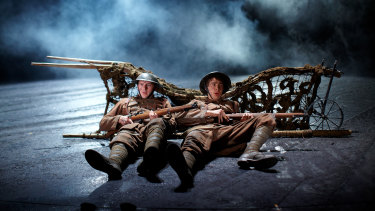 The play tells the stories of the individuals impacted by war.

Something similar happens in War Horse. Children may not know much about the two world wars, but they know well enough what war is. Maybe they see snippets of Iraq or Afghanistan online; maybe they are taken on school trips to war graves. By telling stories of individuals like Albert, who may not be much older than they are, Morpurgo makes those gravestones live.

"It opens eyes and hearts and minds to the fact that these were real people, not just monuments. I think it is important. The fact it's a human tragedy, every single one of them and when you do go to war, this is what happens."

It can be distressing seeing animals die on stage, even if they are just wire and leather constructions toppling to the ground. "I hate the fact people are hurt by it, but I know that we must tell it as it is," he says.

"No one should walk out feeling 'well, that's all right then'. And they don't. The kids will say 'I'm really glad Joey got home, isn't that good?' Besides that, they know they have lived through terrible times. But that's it, they lived through it. There's got to be a bit of light, just not too much."