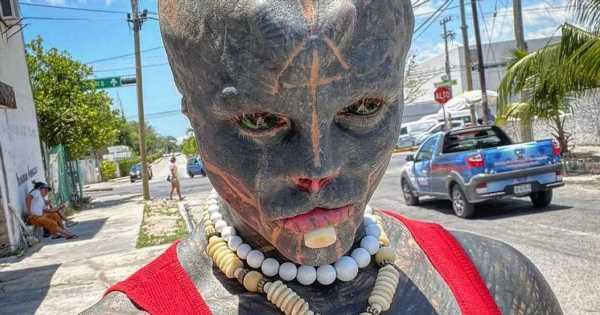 A body modification addict who is transforming into a "black alien " says his extreme looks gets him banned from certain restaurant spots.

Anthony Loffredo, otherwise known as the Black Alien Project, has removed his fingers, nostrils and even ears to look like an extraterrestrial.

His entire body is also covered in tattoos and his tongue is split like a snake.

Unsurprisingly, his appearance often attracts stares from the public and he's now claimed he gets hidden away when going out for meals at restaurants.

Speaking to LadBible TV, he said: "If I want to eat at a restaurant, sometimes the server says I can't eat on the terrace."

But he has come to terms that some people are "close minded", as "that's how it will be for all of humanity".

Anthony says his modifications and tattoos came about because he felt he was born in a body that wasn't his.

And he claims his appearance has helped others to feel more confident.

He continued: "There are people that said thanks to me as they feel more secure now.

"That now the looks they get from other people, don't bother them."

Anthony revealed last year how his looks have prevented him from getting a job.

“This type of change, it’s not just a tattoo, it’s something bigger,” he stressed, while speaking on the Club 113 podcast.

“With my family, I can’t find a job, there’s lots of negative stuff. It could be positive because you feel better, but you have to know there’s also a dark side.

Despite his radical look, the art enthusiast said that he wants to be treated like everyone else.

He added: “I’m a normal guy, I work, I have a family… I like being looked at like a normal guy with a job, with a family, who has a friend, girlfriend, all of that. That’s what makes me normal.”

The body modifier claims his transformation is only "46%" complete and has plenty more procedures planned.

He previously suggested he was going to amputate his leg, even posting a mock up of what it would look like.

Keep up to date with all the latest weird and wonderful news from Daily Star by signing up to one of our newsletters here.