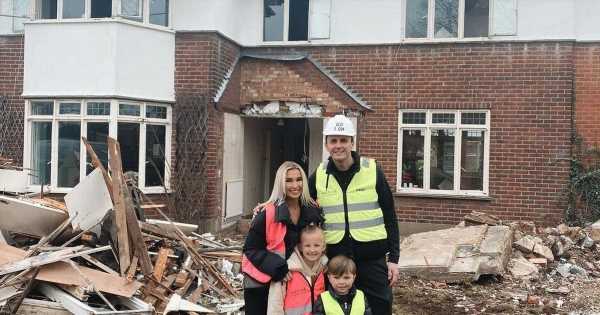 Billie Faiers and Greg Shepherd have given a glimpse of their roof on their stunning £.14million 'dream home'.

The Family Diaries stars, who recently revealed that they will 'definitely try for third baby', gave a sneak peek of the roof as it neared completion after 30,000 tiles had been laid on their five-bed house in Brentwood, Essex.

"The roof is nearly done and I am told there's 30,000 tiles that go on this roof! Thirty-thousand individual tiles! That's mental! The boys have done an amazing job and it's nearly done," Greg said.

The dad-of-two, 35, filmed the sprawling home, which has been hit by delays after their application for planning permission was first refused, from the roof and gave a sneak peek of the view from their future home.

Captioning the footage to their 603,000 Instagram followers of their home account, the couple penned: "We have a roof. We decided to go with quite a traditional style called Pembury hand made clay roof tiles … And we are obsessed."

Greg previously filmed Billie, 31, supervised by a builder, in a pink hi-vis jacket nailing a tile to the roof as the dad-of-two cheekily commented: "Doing it ourselves and saving a few quid."

Speaking to The Sun ahead of their new ITVBe show, Billie & Greg: The Family Diaries, Billie said: "We always talk about it. I do think we will definitely go for baby number three. It’s definitely something we will consider."

They’d hoped their new house would be ready for Christmas, but are now hoping it will be ready by Spring next year after they experienced delays. Billie said: "Within the next few weeks the windows are going in and it’s going to be rendered.

"It’s actually going to be a house – an empty shell. Then we’ve got all the inside to do and the landscaping.

"We’ve definitely got our hands full.

"It’s honestly a full time job. You do have to be continuously on the ball with it. I’m looking forward to getting to the interior part of it now because all of the other stuff that has been going on the last couple of months has to be done but it’s a bit boring!

"My work on the house is really going to up, I’ve really got to get my head down with it all."