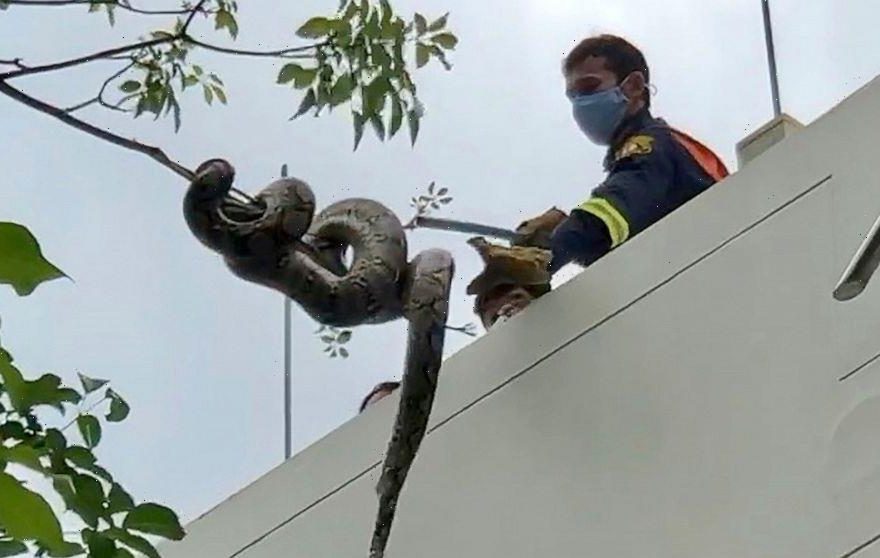 BANGKOK — Bangkok parkgoers looking for relief from renewed coronavirus restrictions got a slithering surprise Thursday when a python as long as two of the Thai capital’s ubiquitous motorbikes was spotted in one of the city’s most popular green spaces.

The reticulated python was only the latest big serpent to turn up in the dense center of Bangkok, where urban sprawl eating into natural habitats has been blamed for a rise in snake sightings in recent years.

This one was found in Benjasiri Park, which is flanked by towering hotels, apartment buildings and several high-end shopping malls now largely off limits due to restrictions put in place this week to stem a surge in virus cases. The curbs have shuttered non-essential businesses and limited restaurants to takeout only, leaving parks among the few public places still open.

As parents pushed strollers and joggers rounded a nearby running path, firefighters called in to corral the snake started by trying to capture it with a ladder from the ground up.

The python plotted its escape by heading out on a limb, bound for a building on the edge of the park that houses the World Fellowship of Buddhists.

Other firefighters were waiting for it on the roof of the building. While one used a stick to grab the python by the neck, another man tried to cut the branch it was on. They soon coaxed it into a sack, tied up the bag, and carried it away.

Bangkok firefighters typically get thousands of snake-removal calls each year. Yoosabai said his department alone has caught a snake or two a day during the current rainy season, mostly in neighborhoods or houses with pets.

As coronavirus cases rise, so do the risks.

“If any houses … have COVID-19 cases, we have to go to catch the snakes anyway,” he said. “Plus, wherever we go to catch a snake, the crowd is always there. We cannot avoid that.”