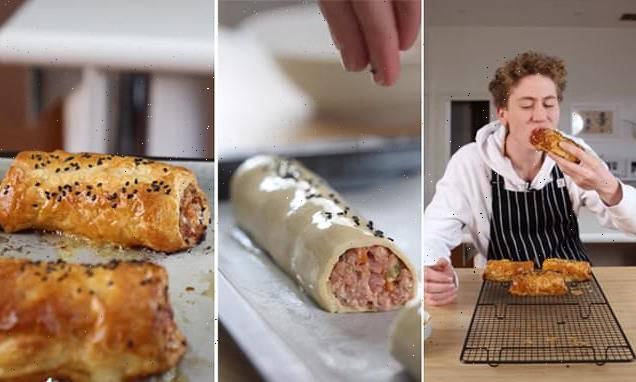 A baker has offered his simple recipe for the perfect homemade sausage rolls wrapped in a golden flaky pastry.

‘Do you still have store-bought sausage rolls? Nah, we make our own,’ the 20-year-old said in his TikTok video. 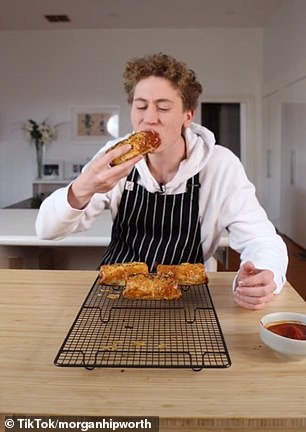 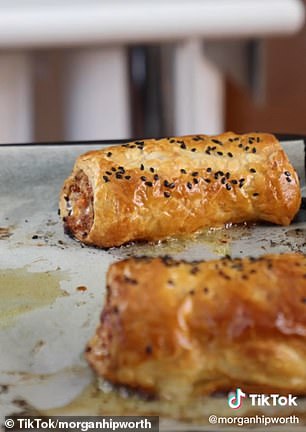 Morgan Hipworth (pictured), from Melbourne, has offered his simple recipe for the perfect homemade sausage rolls wrapped in a golden flaky pastry

To make the rolls, he fried off the diced carrots, onions and celery in a pan until soft.

Next he added the bacon and cooked it until it was crispy, then he set it aside.

In a large mixing bowl, he combined the pork mince, egg, herbs such as rosemary, thyme, parsley, bread crumbs and the bacon mixture.

‘Pork results in a much juicer result than beef due to the fat content,’ Morgan said.

He then cut a puff pastry sheet in half and placed half the filling and shaped it into a long log along one edge of the pastry.

Morgan brushed the edge of the pastry with the egg wash then he rolled up the sheet into a sausage roll, finishing with the seam side down.

He brushed egg wash on top, and added a sprinkle of sesame seeds.

The sausage rolls were baked in the oven at 200C for 20 minutes, or until deeply golden and crispy.

Morgan said tomato sauce is a ‘must have’ when serving sausage rolls.

His video has since been viewed more than 800,000 times, with many saying they couldn’t wait to recreate the sausage rolls at home. 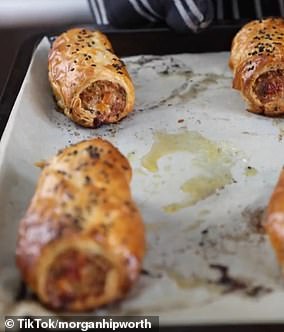 For the egg wash:

Preheat the oven to 200C

In a fry over medium add the olive oil, carrot, onion and celery and cook until it turns soft. Add the bacon and cook for a further 2-3 minutes or until the bacon starts to turn crispy (don’t make it too crispy though as it will continue to cook in the oven). Remove from the heat and allow to cool for 5 minutes.

In a bowl combine the mince, egg, breadcrumbs, herbs and cooled bacon mixture and mix until combined.

Make the egg wash by combining the egg and milk in a bowl and whisk until combined.

Brush with the egg and top with sesame seeds. Bake in the preheated oven for 20-25 minutes or until deeply golden. Serve with tomato sauce and enjoy!