Ariana Grande lent her vocals to ‘Donda’s title track alongside Kanye West. Jay-Z, The Weeknd, and Travis Scott are some of the other big names to appear.

Ariana Grande, 28, is perhaps the most unexpected celebrity to appear on Kanye West‘s long-anticipated album Donda. Following three listening events and weeks of anticipated release, the project finally appeared on streaming services as of Saturday, Aug. 28. Ariana was notably listed on the credits for the title track “Donda” — and upon a second listen, she can clearly me heard singing the words “Forever, forever, no” at the top of the song (the song also features The World Famous Tony Williams).

Ari later sings the line “chase the time,” during a powerful recording by the late Donda West, who passed away in Nov. 2007 following complications from surgery. Finally, the Sam & Cat alum sounds angelic towards the end of the song as she croons the chorus with Kanye once again. It’s unclear how the unlikely collaboration came about, however, Ariana joins a lengthy list of big names on the project: Jay-Z, The Weeknd, Travis Scott, and Playboi Carti are just a few celebs who have guest verses. Controversially, Marilyn Manson and DaBaby were also included. Notably, Ariana has yet to acknowledge the Donda appearance on her own social media profiles.

Fans on Twitter, however, reacted to the surprising collaboration. “I never expected Ariana Grande to be on Donda,” and “waking up to see ariana grande featured on donda was NOT what i expected and idk how to feel about this…” were two of the comments posted to the social media platform. Another thought she absolutely slayed her brief bits on the song, demanding more from the recording session! “Petition to edit Donda and give Ariana Grande a full chorus cause holy s— that women can sing,” they penned. 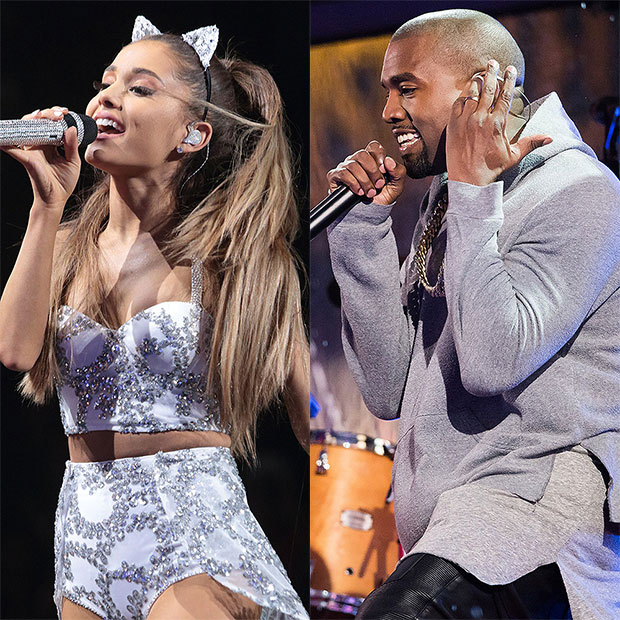 The appearance is more surprising given the pairs’ past history: back in 2018, Ariana posted a tweet in response to barbs being exchanged by Kanye and Drake. At the time, she and Miley Cyrus were about to drop new songs — so Ari politely asked the men to “just behave” for a few hours to let “us girls shine” later that evening. Kanye replied making reference to his mental health.

“I know Ariana said this to be cool and didn’t mean no harm but I don’t like even slightest level of slight commentary from someone I know loves and respects me,” the Yeezy designer tweeted back. “All of this foolishness weighed on my mental health so @ArianaGrande you know I got love for you but until you’re ready to really make sure everyone’s ok don’t use me or this moment to promote a song,” he then accused.

Shortly after, Ariana apologized. “With all due respect, i don’t need to use anyone to promote anything. period,” she replied in Dec. 2018. “i was making a comment ab what men were doing at the time vs. women. it was a joke which i understand now was probably insensitive. i apologize if i was in any way triggering and hope u feel well today.”

On Donda, Kanye played the full-length album for the first time at a July listening event held at the Mercedes-Benz Stadium in Atlanta, Georgia. Estranged wife Kim Kardashian, 40, was in attendance, supporting him with a matching red Balenciaga ensemble. Kanye followed the event up with a second in Atlanta and a third just days ago in his hometown of Chicago, Illinois. Kim was once again present for the Chicago show, also participating as she appeared on stage in an eyebrow raising white wedding dress.