Woman, 28, who fractured her spine while jumping in the middle of nowhere and had no idea where she was reveals how a clever app showed paramedics her exact location

A woman who suffered a spinal fracture after a fall while out walking with her boyfriend has told how an app helped emergency services rescue her.

Laura Moreton, 28, an occupational therapist from South Wales, was out on a rural walk with her boyfriend Lewis George, 30, on 26 June when she fell and suffered the serious injury.

Unable to walk to the nearest road, Laura remembered she had previously downloaded the what3words app – which allowed her to give the ambulance service her exact location.

After giving them the 3 word address Welsh Ambulance Service knew exactly where she was and found her straight away, while the Hazardous Area Response Team (HART) were also called to assist with her rescue as her injuries were severe. 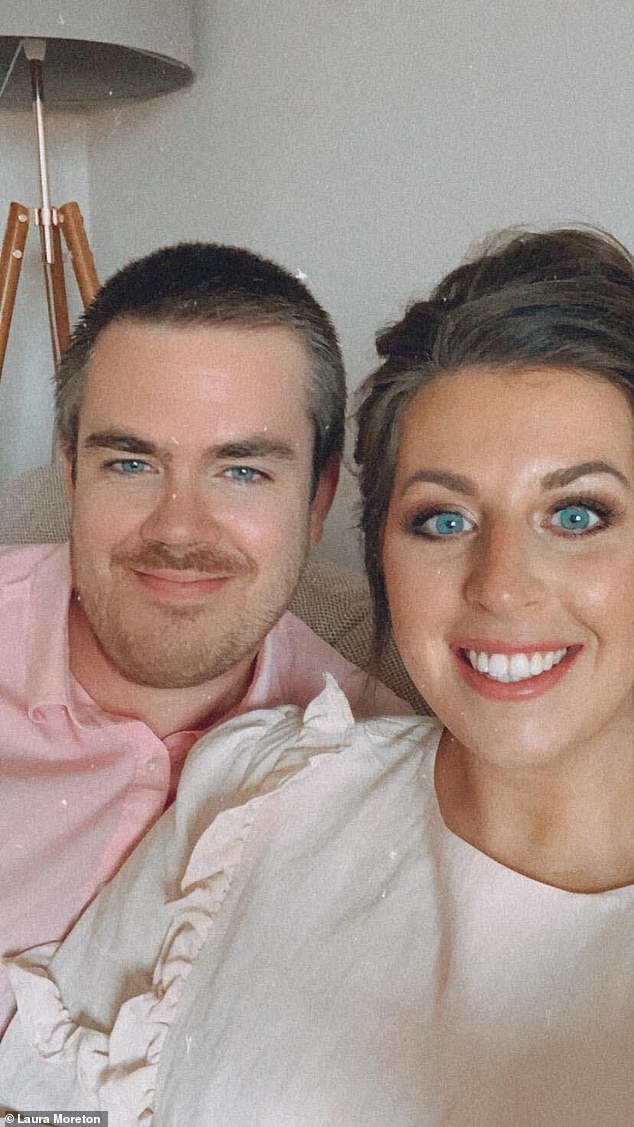 Laura Moreton, 28, an occupational therapist from South Wales, and her boyfriend Lewis (pictured, together) decided to take short cut over a 6ft wall while out walking – but as Laura jumped, she quickly knew she’d caused herself a serious injury 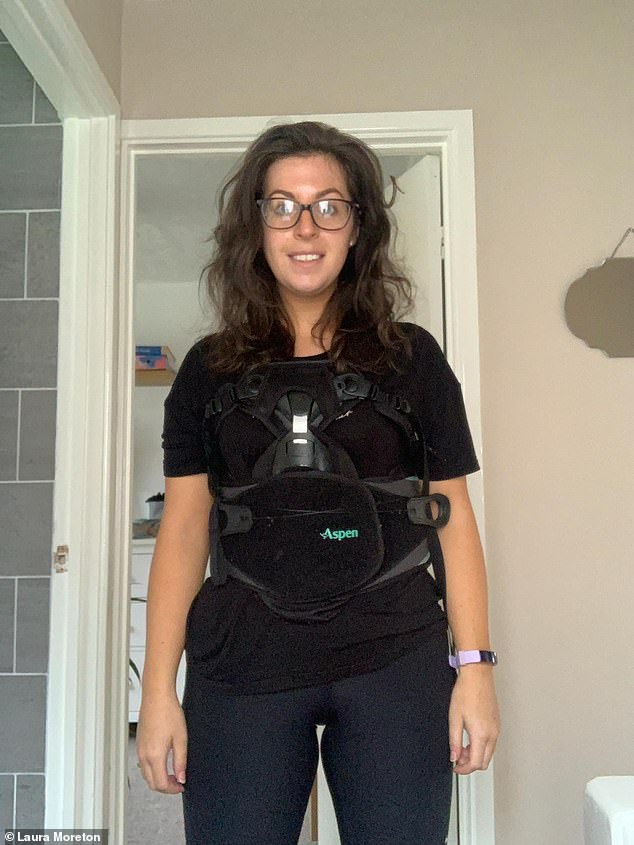 Laura suffered a spinal fracture after a fall while out walking with her boyfriend on June 26 – but was able to tell paramedics of her location thanks to an App she had previously downloaded. Pictured, with a back brace 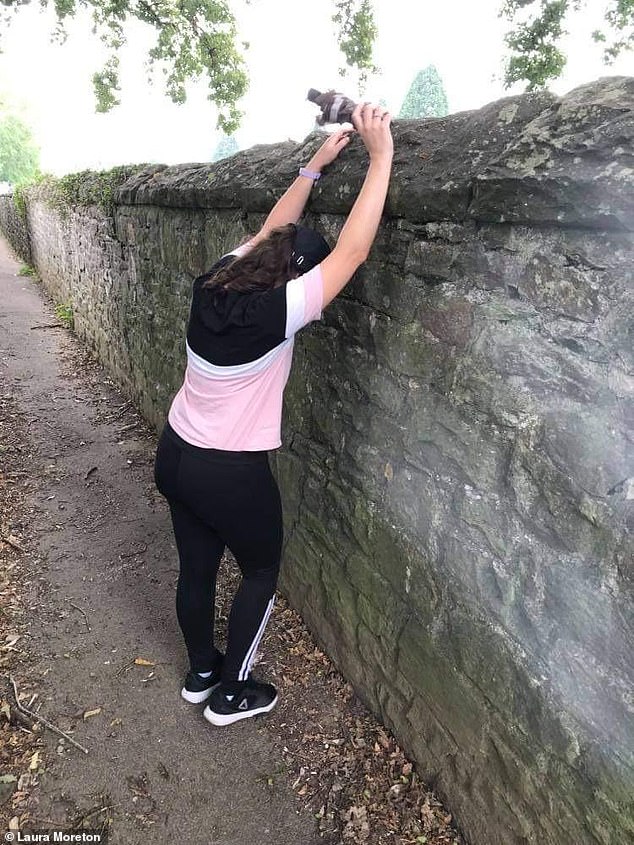 What3words has split the world into 57 trillion squares and assigned a unique 3-word address to each square, making it simple to pinpoint and communicate tricky locations. For example, one of what3words’ office entrances can be found at ///filled.count.soap.

‘I originally downloaded the what3words app after hearing about it from a friend,’ explained Laura. ‘I thought it might be useful as I live in South Wales with lots of rural walks and knowing that I am fairly accident-prone.’

However, at the time, Laura was completely unaware of just how useful the app would become.

How do you use what3words in an emergency?

2. Find the 3 word address for your current location.

3. It works offline – ideal for areas with unreliable data connection.

4. Share your 3 word address over the phone to the call handler.

The emergency service can then coordinate a response directly to the exact location where help is needed.

What3words has split the world into 57 trillion squares and assigned a unique 3-word address to each square, making it simple to pinpoint and communicate tricky locations. For example, one of what3words’ office entrances can be found at ///filled.count.soap.

‘My partner and I were going for a walk after work, just around our local area, and we thought we’d take a short cut about halfway round,’ she explained. ‘Lewis said, “Just jump over that wall Laura, it’s not that high,’ so I did – and I knew straight away I’d hurt myself.

‘The wall was about 6ft tall but it looked lower on one side than the other. I either landed awkwardly or didn’t bend my knees, I’m not sure what I did, but I ended up with a crash fracture in my spine. I fell on the floor screaming and shouting, “I’ve really hurt myself.”‘

Laura went on to explain how Lewis called for an ambulance, but struggled to identify their location as they were on an unnamed lane.

‘I tried to get up but nearly fainted,’ Laura explained. ‘There was no way I could walk to the main road.

‘Then I clicked and thought I had what3words downloaded and asked if they used the service.’

‘They did and the paramedics knew my exact location after I gave them the 3 words.

They found us straight away and the ambulance came within 15-20 minutes.’

‘I sustained a spinal fracture and also needed help from the HART paramedics to help put me on the stretcher safely.

‘I had gas and air and some other painkillers and because of Covid-19, I had to be in A&E on my own for hours.’

She continued: ‘At the hospital, I had an X-ray and then doctors told me I’d fractured something and needed to wait for the neurosurgeon to come out of surgery to see me.

‘I waited until 4am to be reviewed and then I was allowed to go home – but a couple of days later they told me I needed a spinal brace for six weeks.’ 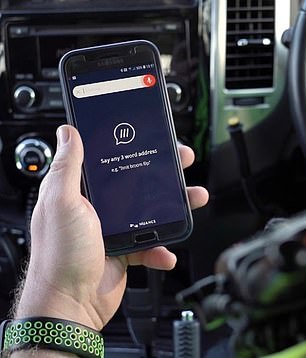 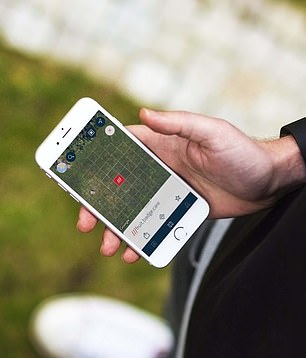 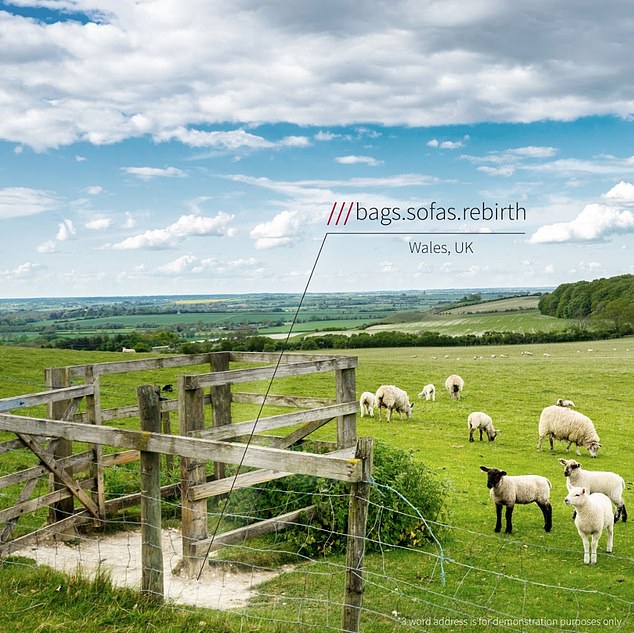 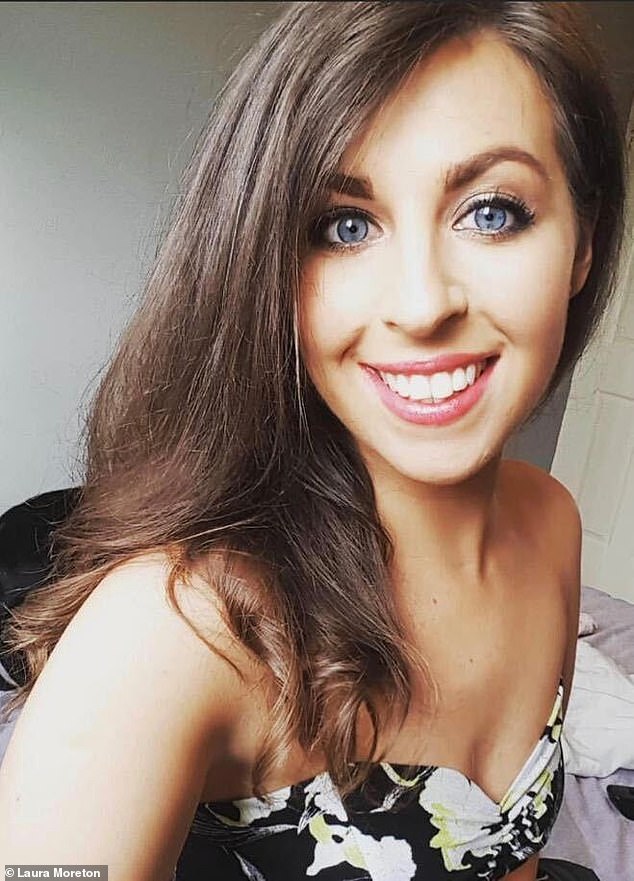 Laura (pictured) has praised the app and says it was reassuring to know help was coming to the exact location, meaning her partner could stay with her and didn’t have to leave to direct the ambulance 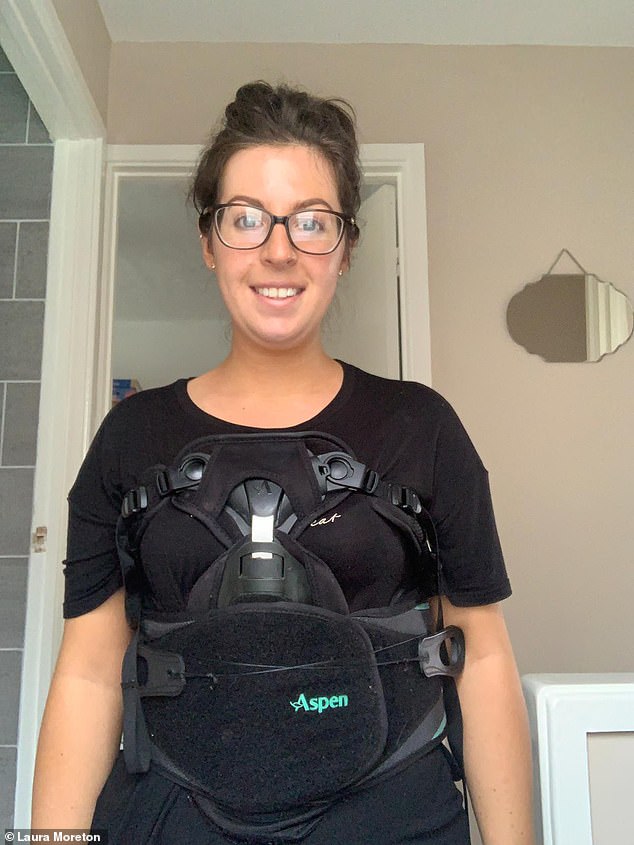 Laura has been told that she can expect pain for up to a year – and now experiences a ‘dull ache.’ Pictured in the back brace she had to wear for six weeks 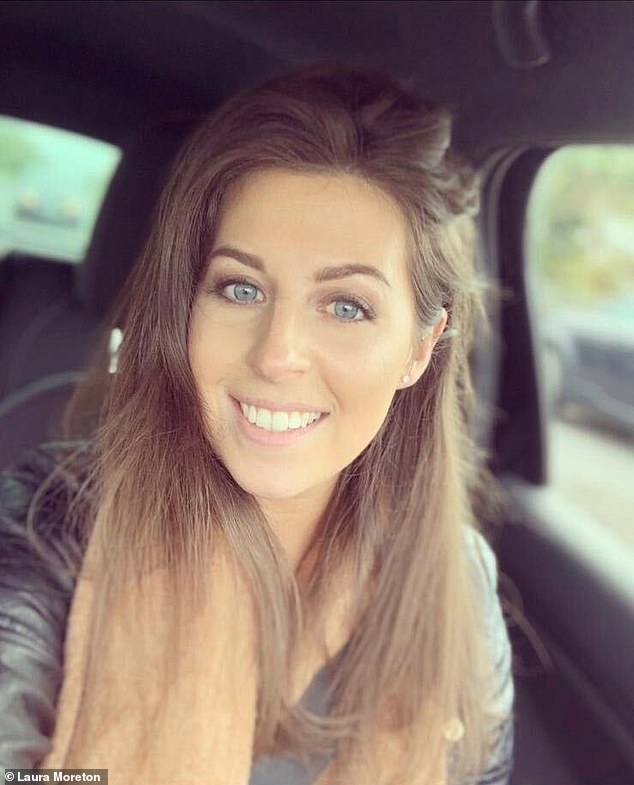 When Laura (pictured) first arrived home, she says she was ‘scared’ to walk up and down the stairs

Now, Laura is slowly recovering from home – and is hoping to return to work in September.

‘I couldn’t be more grateful for the what3words app or the treatment I had received,’ she said. ‘I would recommend it to everyone.’

‘Knowing that help was coming to the exact location meant that my partner could stay with me and not leave me to direct the ambulance. It massively helped to reduce my stress and anxiety.

Laura added: ‘Doctors have said to me to expect pain for up to a year. I get a dull ache now, but it’s not as bad as it was before.’

‘When I first come home I was scared to walk up and down the stairs, and the steps in the garden. I was thinking, “I can’t believe that one minute I’m walking and the next I’m not.” It was a bit traumatic really because I couldn’t believe how quickly it had been taken away.’

Today, over 80% of emergency services across the UK use the app on a regular basis.

Jason Killens, Chief Executive of the Welsh Ambulance Service, commented: ‘The what3words technology has proven to be such a valuable tool since we launched it in March, helping us to locate a number of ill or injured people in remote locations who otherwise we would have struggled to find.

‘With the easing of Covid-19 lockdown restrictions, we’re anticipating more visitors to Wales than ever before, which is why we would invite the public to download this free app now in order to save precious time in an emergency.’ 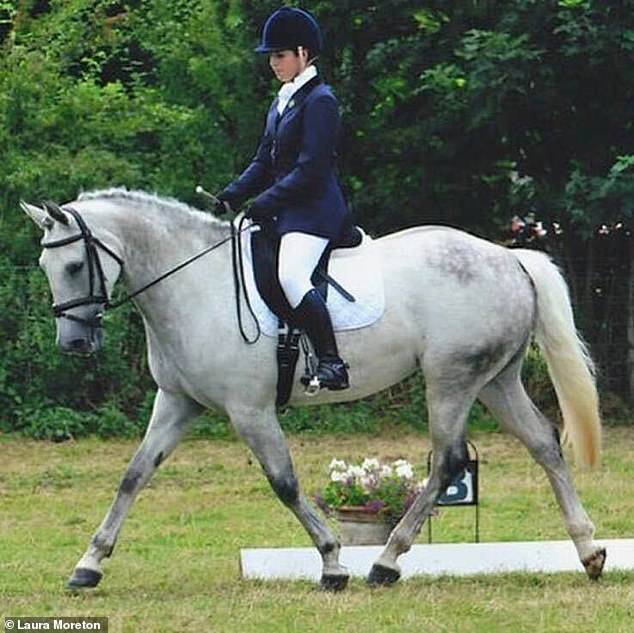 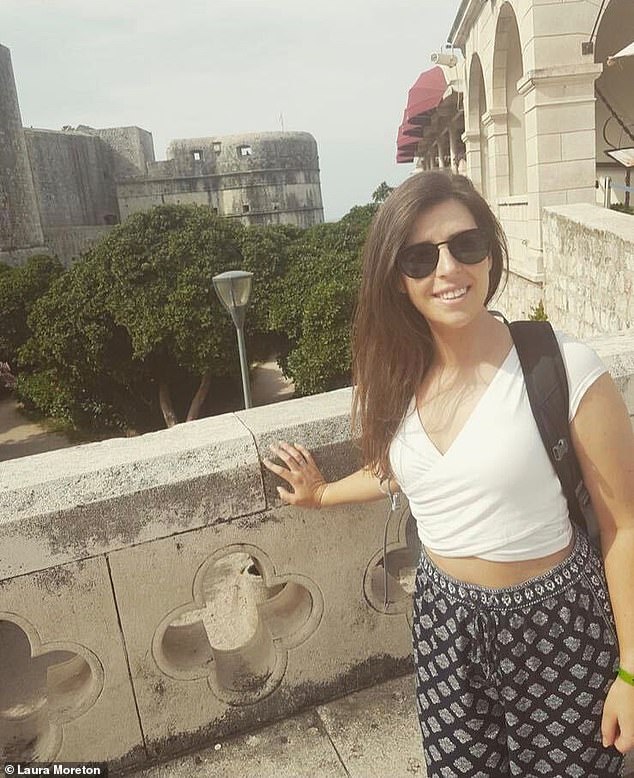 Laura (pictured, before) says the experience has been quite ‘traumatic’ because it’s hard to believe how quickly  her ability to walk was taken away from her