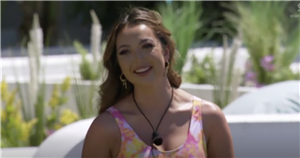 Love Island is finally back and after just one week of episodes and the catchphrases "Putting all my eggs in one basket" and "My type on paper" already being thrown about, we’re completely hooked.

With dramas already looming and poor Shannon already dropped from the season, it’s definitely starting to heat up already.

But it was contestant Sharon who made a comment within minutes of arriving at the villa which got people talking, including supermarket retailer Aldi.

Before the first initial coupling up on the first episode, host Laura Whitmore asked the girls what their turn-offs are and the Love Islander replied saying she hates men in white jeans and an ego and let's be honest, we all totally agree.

This particular comment got the viewers' attention with many girls explaining that they’ve been thinking the same. One fan wrote: "Sharon is spitting facts." while another commented: "I agree Sharon, white jeans are a no go!"

But it was Aldi’s tweet which had us all laughing when they tweeted" "*Scraps white jeans from next Aldi Mania launch*".

It wasn’t long until Love Island sponsor I SAW IT FIRST joined in on the banter replying to the bargain supermarket saying: "… you know we have a menswear brand right? We can feel a collab coming on."

White jeans have been a wardrobe staple for the young men who have entered the villa over the years, with Chris Hughes and Kem Cetinay wearing them most evenings in their season in 2017 and while we may still have 7 weeks left of the show, we’re very much hoping we see little to none of those spray on white jeans this season.