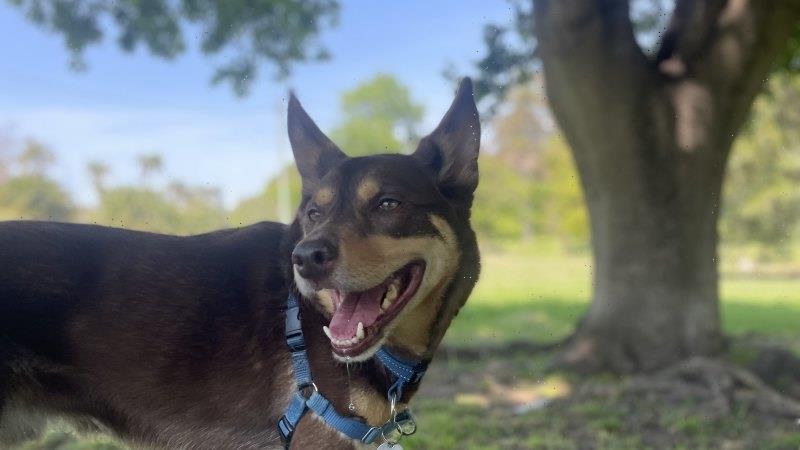 It’s your dog, Clancy, writing from the city. I’ve just come across an hilarious quote from a writer called Lennie Lower. He says: “Never allow a dog to lick the face of a baby, as any number of diseases may be communicated, and in the case of a valuable dog …”

Oh, how I laughed, because this is exactly my problem. The new baby keeps on kissing me. A full-on kiss, right on the muzzle. It’s nice to be loved, but I don’t know where he’s been. He may have been kissing other babies. 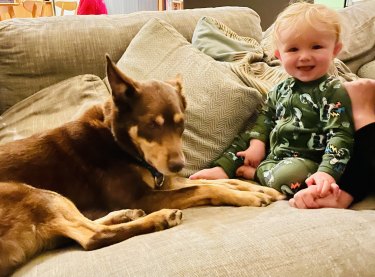 I prefer it when the baby is safely in his high-chair, with me hovering below. His parents give him a toast soldier covered in Vegemite – a personal favourite of mine – and my little mate immediately drops it over the side, ready for my delectation.

He does the same with the second piece, then the third, and so on. Each piece is dispatched the moment it is handed to him.

It’s raining toast. The precipitation is so heavy, the odd toast soldier hits me on the noggin.

At one point, I become worried that no actual sustenance is going into the baby. I feel like saying: “Mate, have one or two soldiers yourself.”

The truth: for this child, the fun of feeding me beats the pleasure of eating the stuff himself. As the one who is always being fed – his mother billing and cooing as she offers each morsel – he enjoys being the beneficent one.

For my part, I’m happy to assist in this important developmental stage, that of experiencing human agency and power.

Once he’s back on the ground and at liberty to crawl around, the baby seems under the misapprehension that I’m some sort of animatronic doll. He prods at my fur in an effort, I assume, to find the button that will cause me to make a sound.

This works with his stuffed whale, which goes “eck, eck, eck” when you prod it. And it works with his wombat, who goes “grunt, snuffle, grunt.” He thinks I’ll be the same.

When I humour him by expressing a small “woof” after he’s prodded my flank a few times, he lets out a squeal of delight, as if my “woof” is the wittiest thing he’s ever heard. His eyes shine. His tiny starfish hands grasp and ungrasp with delight. He laughs uproariously, rocking backwards and forwards on his tiny feet, while hanging onto me for support.

Apparently, I’m the most amusing dog in the world. Finally, I know what it must have felt to be Dorothy Parker in the Algonquin Club, unveiling that line about being not so much under the table but under the host.

This ego boost is not the only positive development since the baby arrived. With the help of the toast soldiers, I’m finally being fed properly after years of short rations.

In the past, I’ve tried to make a point about the inadequate serving sizes by consuming each meal as quickly as possible. I don’t so much eat the chicken as inhale it.

My point to Man and Lady: if a meal can be eaten in under three seconds, does it really count as a meal? If people were in and out of Sydney’s Aria or Bennelong in the same time-frame, there’d be complaints to the authorities.

After inhaling the food, I then lick the metal bowl and push it nosily around with my nose as if to say “have you noticed? It’s empty. And rapidly so.”

Whenever I do this, I’m reminded of the British novelist Kingsley Amis. The wily Amis, when desperate to have his drink refilled at a party, would simply drop the wine glass onto the floor.

When the host ran over in a panic, he’d dryly observe “thank God it was empty”.

At the back doorstep, I’m pushing the empty bowl one way and then the other, before turning the thing over with a loud clatter. I look up as if to say, “thank God it was empty”, but the literary reference appears to whizz over their heads.

Sometimes, I doubt they’ve even read any Kingsley Amis.

All Man says is: “Oh, Clancy, stop making a racket. The bowl is empty,” as if I’m not perfectly aware of the tragic sight before me.

My little baby mate would never make this mistake. At the moment, it’s just titbits of food, but I’m looking forward to when he’s five or six years old, and he’ll hand over whole pizzas, a chicken dinner and complete wheels of cheese. I see the two of us cruising to the shops together, armed with his pocket money, maybe to pick up a takeaway meal to enjoy together. What bliss.

In the years ahead, I will be his advocate, and he will be mine. I will say “more walks”, to the benefit of both of us. He will say “I love going to the beach”, a view with which I concur. We will both say “more toast soldiers”.

Get them ready, folks, marching in formation on the plate. However large the army, the two of us will be able to defeat them all.

In need of some good news? The Greater Good newsletter delivers stories to your inbox to brighten your outlook. Sign up here.