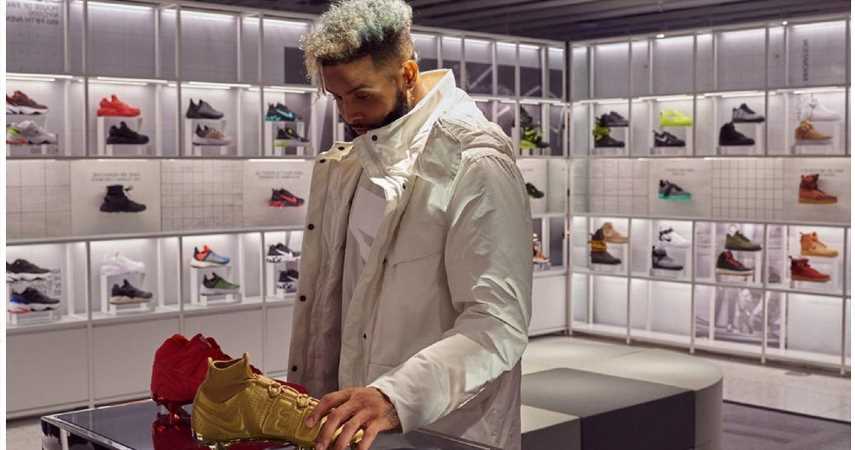 American football wide receiver Odell Beckham Jr. has lived a lavish lifestyle. He started to love his shoes at a young age. His dad always kept him laced up from his first Nikes to his first Jordans, which prompted him to be a sneakerhead. His dad was the main reason he got his passion for collecting sneakers. He has an insane sneaker collection like Bruno Mars.

He was fortunate that his dad would buy him a new pair of Jordans whenever they released new ones. His love for shoes inspired him to build his insanely luxurious sneaker closet. Beckham lives in a 13,800 square meter residence in Columbia Station, Ohio. The house includes a movie theatre, game room, four bedrooms, seven bathrooms, and other amenities. But what is most striking them is his shoe closet.

The closet is so big that it has the size of a luxury apartment in New York City. The room has a lounge, racks, and chairs close enough to the looks of a Nike store than a closet. The football player had an estimated $ 80 million for his earnings; no wonder how he gets all of this insane habit.

RELATED: The 10 Most Expensive Sneakers In Offset’s Insane Collection

Odell Beckham Jr. linked up with Xbox to create his own Xbox Air Force 1. Besides his customized controller, he is accompanied by the Xbox-inspired Air Force 1. It has simple touches with an Xbox logo embroidered at the heel with a lace unit that goes through its shaded loop and dress atop the tongue. The exterior has a triple black colorway.

Anyone can win the Xbox AF1 and the controller by retweeting the Xbox sweepstakes tweet in the holiday season of 2020. The AF1 Xbox edition is in minimal quantities, and they released the pair in July 2022 for $ 160.

Nike who pays tons of celebrity endorsers has created a shoe that’s just as fierce and flamboyant as OBJ, so the Nike Joyride Flyknit was born. The shoe features a laceless construction, and a midsole uses three independent pods for flexible cushioning. It has full detail and meaning specific to the athlete’s preference, with a translucent upper strap.

This type of Nike Afs comes with a silver swoosh with a base color of Bright Green colorway. The shoes feature a light green leather upper with white foam on the low-cut collar and tongue. The same month of the release as the LV-inspired Nike Air Force by Abloh, the pair’s retail price is $ 160, and the average resale price is $ 3,133.

According to shoe website StockX. Beckham posted on his Instagram account wearing the pair the shoes, matching his black and green Louis Vuitton shirt that cost $ 1,090.

OBJ is an Air Max lover though he receives many sneakers for performance and lifestyle. He crafted the Air Max 720 OBJ Slip to honor the athlete’s association with past teams. The shoe’s imprints blue colors, much of the leather fabrications, and bits of black on the heel pull with a technical lacing system.

The Air Max 720 OBJ Slip has a complementing Air Bubble blue tint, and the pair’s release date was on February 2020 for $180.

OBJ’s Air Force 1 Utility, as it dropped on the episode of Complex’s Sneakers Shopping, everyone got a sneak peek of this fabulous gray pair. The billion dollar company created eye-catching iteration calls upon a reptilian texture on its gray base, with two black straps aiding the shoes to lock up with a magnetic Fidlock closure.

It includes a D-ring hook on the heel with a glowing mint sole unit adding color to the neutrally toned AF1. This new lace less AF1 suitably dubbed the athlete’s features and released on November 2018 for$ 145.

Another way to make OBJ’s own Nike Air Max 720 was restructuring the design focus on upbeat lettering and tribute to Air Jordan. This black model of his Air Max 720 rests right on top of most standard 720 soles. It surrounds the entire build with air and a much more gripping construction than the mainline.

Above is a glossy midsole cup with various waves in either mesh. Exposed stitching nearby the tongue, contrasting a few grainy tones. It rolled out to retailers in November 2019 at $200.

This shoe was Odell Beckham Jr’s first Nike lifestyle sneaker. It has a mustard yellow color on the upper of the Nike SF-AF1 Mid. The New York City taxi cab was the inspiration behind the crafty design of the shoes.

One of the memoirs that stuck out to the famous NFL superstar Odell Beckham Jr when he first arrived in the Big Apple in 2014. The pair took to release on November 2017, with its retail price set at $160.

The late Virgil Abloh designed the shoe. He has been the artistic director of Louis Vuitton’s menswear collection since 2018. The NFL star shared a picture of himself on a boat flexing his LV Nike Air Force 1 on his Instagram account after suffering from a torn ACL in his left knee during the Super Bowl LVI. It was one of the rarest designs of Virgil Abloh, considering it a highly sought pair.

READ NEXT: The 8 Most Expensive Adidas Sneakers Of All Time