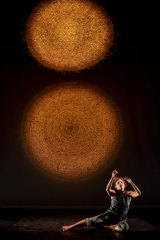 Last year, in Quarterly Essay, historian Mark McKenna suggested that the deep dispute at the heart of the Australian nation was an inability to agree over the meaning of Aboriginal dispossession – the moral cost of how this country was settled.

The topic is so painful that it only appears in the national conversation in short, tense snippets. As part of YIRRAMBOI festival, a magnificent double bill at Arts House – plenty serious TALK TALK by Vicki Van Hout and Daddy by Joel Bray – is asking us to engage with the complexity of lives left unexplained by such a clipped narrative.

Wiradjuri woman Van Hout is a choreographer, dancer, teacher and writer of enormous significance to Aboriginal dance, described as an “integrator” of Aboriginal cultures.

There is a part in her work, plenty serious TALK TALK, where she explains three traditional steps, and the details that differentiate them from ballet moves. Joel Bray, also Wiradjuri, whose new show Daddy comes on the heels of the great success of his sold-out Dance Massive show Biladurang, is just one of the emerging artists who owe a debt to Van Hout.

Together, their two works create a conversation across two generations about identity, its appropriation, commercialisation and loss.

Plenty serious TALK TALK opens with a behind-the-scenes video of an arts administration in crisis because a Welcome to Country artist has been double-booked. From here, Van Hout journeys in
multiple meta-directions, traversing movement, multimedia performance, stand-up, performance lecture, and some hilarious recorded phone conversations.

Throughout, she maintains a down-to-earth tone, regardless of whether she is mocking the fictional “Light Tan”, discussing cultural appropriation, or trying to put a price on her indigeneity to sell to a friend (complete with touting the benefits of extended healthcare entitlements).

An artist trained at both NAISDA and Martha Graham School in NewYork, Van Hout wonders about which of the many techniques she uses would be considered culturally appropriative. Above the stage hangs a circular woven mat, handmade by Van Hout herself: a salute to craft.