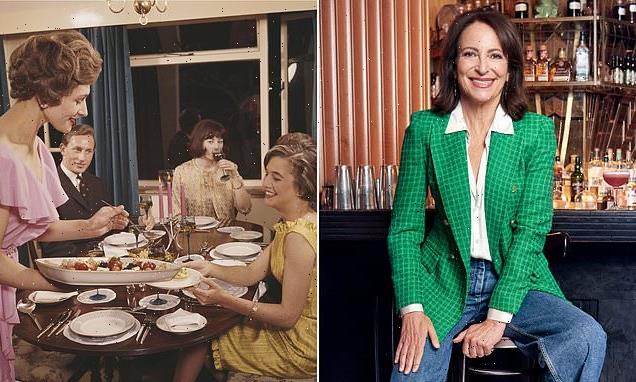 A dinner party ended my first marriage. So why do feminists like me still love hosting them?

A dinner party was the last straw in my doomed first marriage. Then a 24-year-old assistant on Cosmopolitan magazine I was still trying to make it work, despite my misgivings.

Up until dessert, the meal for six had gone well. I hadn’t overcooked the salmon or undercooked the potatoes. I’d even made mayonnaise. Then out came the homemade apple crumble alongside the plastic cream carton, which I put on a saucer with a spoon.

My husband, seated of course and holding forth to our guests, snarled: ‘What the hell do you think you are doing putting that on the table? Can’t you find a jug?’

I blushed scarlet. Not because of the faux pas, but the public humiliation.

Later, after I’d finished all the washing up, I reached a decision. Dinner parties and my marriage be damned.

I was true to my word in one regard. I ditched my marriage of five years. But I never quite managed to ditch the dinner-party habit.

Dinner parties are what we middle-class people did, usually involving a seating plan (‘You sit here’, ‘You sit there’) and three courses plus coffee with chocolates on the side. And a tablecloth, perhaps that lovely embroidered one you got as a wedding gift. And rings for proper serviettes that you would launder afterwards, in readiness for next time. And gleaming glasses, matching, of course. 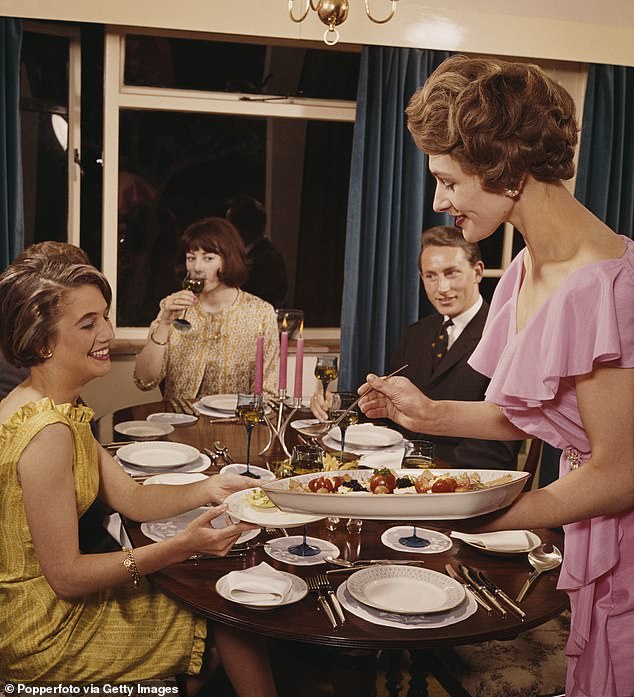 ‘Our turn next,’ I’d say, as I wrote the thank-you card after someone else’s dinner party, already fretting over whether I’d run out of recipes I could tackle, or whether I’d have to repeat a dish I’d made those same guests previously. As if any of it really mattered.

And yet it did. It still does. This week I host my first official post-pandemic dinner for eight. Which begs the question why? Why, when our grandchildren would just order a Deliveroo, does my generation still feel pressured to prove we are domestic goddesses? Younger people think we are mad. The dinner party was declared well and truly dead last week with a poll of 2,000 Britons finding that eight in ten thought the very term old hat.

No one could care less about immaculate dishes that take a whole day to prepare. People are perfectly happy instead with ready meals that can be popped in the microwave and eaten in the kitchen.

A spokesman for kitchen appliance firm Stoves, which commissioned the survey, points out that a starter of olives and hummus with pitta bread, a microwaved main course then ice cream and berries for dessert takes just seven minutes to put together and costs about £20 for four.

As for agonising over what to wear, 70 per cent are content to turn up in sweatshirts and tracksuit bottoms. To think I used to plan my outfits with as much care as I planned my menus!

And yet, we boomers — the original feminists, no less — can’t seem to shake the habit. It’s as if it’s been ingrained in our DNA — that need to be as good at home as we were at work was proof we were modern women; conversely dropping the ball in either department somehow made you a ‘lesser’, or less well-rounded, woman.

We were the first generation to be taught that you could have it all — the high-powered career, the ideal family, the spotlessly fashionable home, the culinary skills — and the dinner party was the ultimate expression of all that.

Welcome to my beautiful home, it said — don’t I look perfect, and see how I cook up a storm, too. Pulling off a stylish dinner party after a tough day at work became, for us, proof we could be feminists without sacrificing our femininity.

Having it all as women also meant doing it all. We didn’t expect help in the kitchen from our spouses (though I learnt after my first marriage never again to pick a partner who wouldn’t at least chop veg and do the dishes).

In the outside world, we were learning how to wield power, but at home we still served, assuming the role of perfect hostess just as our mothers had done. Margaret Thatcher successfully proved a woman could get right to the top, but even as prime minister she occasionally put on a pinny and cooked dinner for the Cabinet in the Downing Street flat.

In her 1975 book Superwoman, Shirley Conran had tried to make us kick the habit, insisting: ‘Life is too short to stuff a mushroom’. But too often it fell on deaf ears. 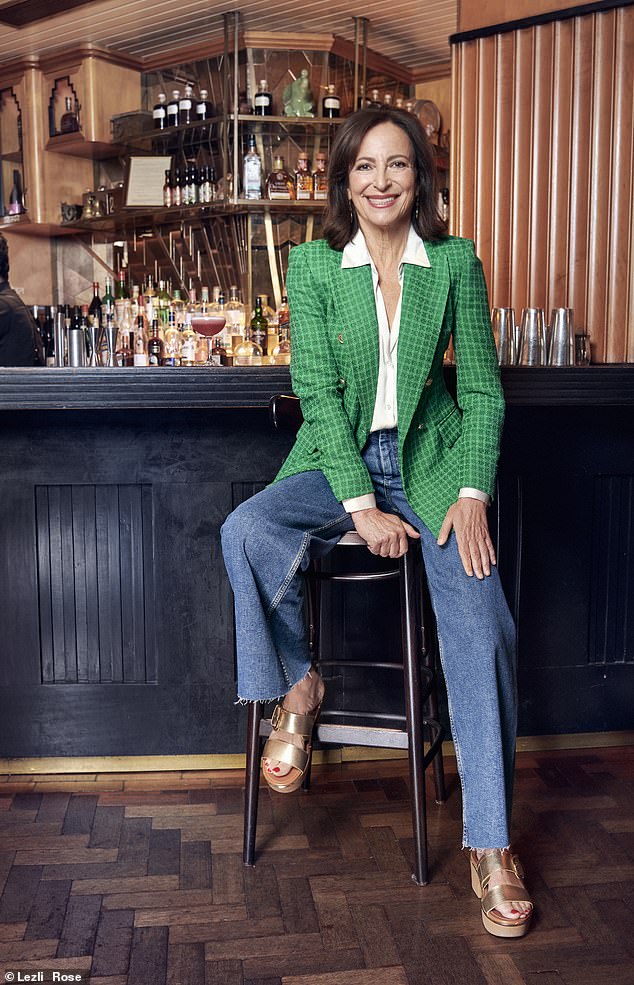 Even though it triggered the downfall of her first marriage, Linda (pictured) still enjoys putting dinner parties on

Half the women in whose homes I was a guest during that decade had taken Cordon Bleu lessons alongside the obligatory secretarial courses. And this was regardless of whether they were graduates planning careers or just doing a little job until the inevitable babies came along.

The fact is, the dinner party was the idealised social gathering, the epitome of grown-up sophistication and style. We would host on average one a month and generally go to at least three.

Right through the 1980s and into the 1990s as I became editor, first of Cosmopolitan and then SHE, and gave birth to my son, I continued to entertain in the same way.

I had a dream job, a lovely little boy and was still hosting dinner parties like they were one more duty I needed to fulfil. It wasn’t unusual for me to be making sherry trifle at midnight on a Friday after work for a dinner party the following day.

It was utterly exhausting but even when the stress took its toll, we still clung to that do-it-all yardstick. It was what was expected of ‘successful’ women.

Nowadays, most of the working mums I know have all but hung up their aprons for good. Our children don’t feel the need to impress anyone — why slave over a hot stove when you can order Michelin-starred meals at the click of a button?

One friend’s daughter, single mum to a seven-year-old, is re-doing her kitchen, including only a table for four, and not just for space reasons. ‘When would I cook for more?’ she rightly asks.

So why am I striving so hard to make my dinner party a triumph? Why, five decades on, would I never dream of popping something in the microwave, genuinely preferring to do it all myself? Maybe it’s nostalgia, or simply to prove I still can.

Naturally, what I’m hoping is that everyone enjoys my food and has a lovely time. But will they? And will I?

I will spend the day ironing, chopping, stirring and letting the wine breathe. That’s the bit I love, radio on, partner helping. Then about 20 minutes before anyone’s due to arrive, I will say: ‘Why are we doing this? I’m exhausted, and what I really want to do is watch an episode of The Crown.’

He’ll reply: ‘Well it was your idea.’ Then the doorbell will ring and although I’ll want to run away, I’ll put on a glad face and in the end will have an evening to remember.

The truth is, we women no longer have anything to prove. Our homes don’t have to be pristine nor do we have to be Cordon Bleu cooks to impress a man.

But there is still something lovely about making a special dinner for friends — and nothing quite as satisfying as that fleeting look of admiration as they taste your fabulous baked lamb on a bed of succulent orzo.