Barnaby Joyce strolled into the front bar at the Kingston Hotel, a traditional watering hole for the Canberra political classes, about 9pm on Sunday dressed in denim jeans and a royal blue RM Williams four-button half-placket shirt. He ordered a schooner.

The “Kingo” has all the charm of a New England country pub and enough sophistication to attract all types. It’s a place where you can cook your own steak, watch the AFL or League or have a glass of red by the fire. 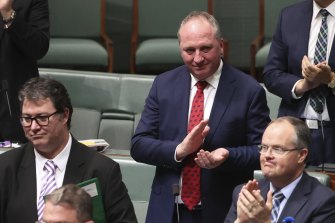 Joyce surveyed the room and saw a handful of Nationals colleagues drinking with journalists, and a dozen Labor MPs and Liberal staffers tucking into their schnitzels.

About 12 or so hours later Joyce would be asking his colleagues for their vote as his old chief of staff, Queensland senator Matt Canavan, brought on a leadership spill in the party room.

It’s hard to keep a secret in Canberra and it was news to no one that Joyce wanted his old job back. It was a lot cleaner than the bumbling effort 15 months ago and it nearly fell at the last minute.

Despite Joyce’s assurances that the leadership position had been “dealt with” in February last year no one really believed that to be the case.

Tongues had been wagging in recent weeks when Joyce was spotted dining with Queensland MP Keith Pitt and Victorian senator Bridget McKenzie in Narrabundah. Newcomers to Canberra were once upon a time advised that it was “a social blunder” to visit Narrabundah but the small shopping strip now boasts some of the national capital’s trendiest restaurants.

The sight of the trio dining together raised eyebrows with the handful of Labor MPs who spotted them. They thought nothing of it until in the days following both McKenzie and Pitt publicly questioned the Coalition’s slow creep towards embracing a target of net zero emissions by 2050.

Then news leaked on Saturday morning that Joyce was yet again set to challenge Michael McCormack for the National Party leadership.

The first McCormack knew something was up was when his press team alerted him to an online story in the Australian Financial Review. He put it down to another round of rabble-rousing from his enemies on the backbench and didn’t bother calling around for support. It would be a critical error.

Between first reading that story and Canavan asking for a spill of the leadership position, not one colleague had told McCormack that he’d lost their vote. It made the loss all the more gut-wrenching for him on Monday.

Joyce came to the vote with a handful of rusted-on supporters. Canavan, David Gillespie, Llew O’Brien, George Christensen and Ken O’Dowd. In recent times McKenzie, who lost her cabinet position last year following the sports rorts affair, had decided her only way back was to align herself with Joyce. And as McCormack slipped and stumbled in recent times and resentment grew among a group of former ministers on the backbench, Joyce seemed like the best hope for their return.

Momentum grew last week when it became clear that Andrew Gee, a NSW MP previously aligned to McCormack, was willing to back Joyce. He was now almost across the line.

While Joyce’s support grew even McCormack’s closest allies had grown concerned. They argued the deputy prime minister was a fundamentally decent and generous man but was a mediocre and uninspiring leader who had failed to grow into the job. And, worst of all, he seemingly had a tin ear.

Joyce, it must be remembered, is educated and well-read at levels that defy his country bumpkin appearance. When a Coalition colleague advised him to purchase some new suits and shirts last year if he wanted to return to the leadership, he did just that.

Despite his ugly and humiliating fall in 2018 he was never going to be content to serve out his days on the backbench. His two young sons to partner Vikki are not the only things that keep him awake at night. For the past three years he has watched Australia and its place in the world change dramatically.

Joyce has become increasingly uneasy with an authoritarian China’s assertiveness in the world and told anyone willing to listen that Australia’s growing level of debt could not continue. He threw himself into a campaign to support the return of Wikileaks founder Julian Assange to Australia and argued a Tamil asylum seeker family held in detention should be able to return to Biloela.

He sat in question time, privately infuriated that social distancing measures had shifted the Nationals leadership out of sight for television viewers.

Joyce 2.0 promises to be a very different deputy prime minister than last time and some of his colleagues are convinced he’s changed.

McCormack bowed out of his job with a level of decency rarely seen in modern politics. And he has vowed to Joyce and his Nationals colleagues all the loyalty he didn’t receive in return.

If there’s a lesson to be learned from McCormack’s demise it’s that being a nice guy is rarely ever enough to succeed in leadership. You need a sharp political instinct.

Joyce now owes it to his Nationals colleagues to show that instincts are just what the party needs. Otherwise it might look like he’s tossed aside a decent man for nothing more than petty revenge.