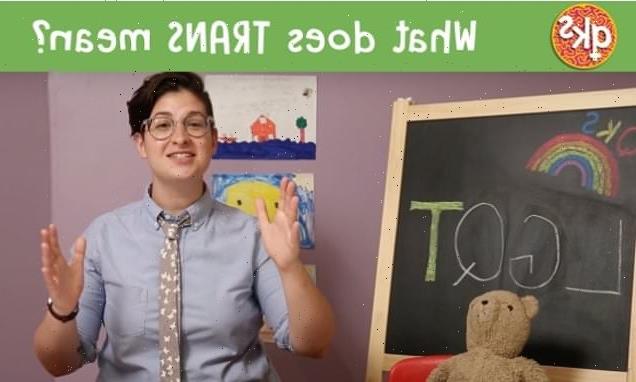 A furious mother has blasted her child’s school for showing students aged 10-11 a video explaining transgender issues without asking for their parents’ consent.

Posting anonymously on Mumsnet, the mother, who lives in Oxfordshire, explained her child who is in Year Six was shown a video by American LGBTQ+ activist and YouTuber Lindsay Amer, from New York.

She said the school didn’t consult parents before showing the clip which tackles subjects such as asking people for their pronouns and discusses how doctors sometimes ‘assign the wrong gender at birth’.

The mother added that she’s emailed the school with the governor cc’d, because she wants an explanation about how they will ‘repair misinformation’.

A flood of responses agreed the mother should complain and took issue with the claim that doctors assign ‘gender’ to babies rather than biological sex.

The mother shared a link to Lindsay’s YouTube video, which is part of her Queer Kid Stuff series.

In the clip, she uses a conversation with a teddy bear to explain the ‘T in LGQT’.

Discussing how the ‘very first thing’ doctors tell new parents, she said: ‘That’s called a gender assignment when doctors announce that the babies are boys and girls.

She continued: ‘There’s something a bit weird about how doctors assign gender to babies. That’s because there aren’t only boys and girls And because not all people identify with their assigned genders.’

‘Oh so the doctos are wrong sometimes?’ Teddy asks.

‘Yes Teddy, doctors sometimes don’t assign the right genders,’ Lindsay replies. ‘When a peson does not identify with the gender they’re assigned when they’re born they are transgender. People who are trans can be boys or girls or people too.’

The Mumsnet commenter was not happy, saying: ‘This is the video my year six watched at school (without any consultation with parents). I’m just speechless.

‘They were also told about Robert/a Cowell and puberty blockers were mentioned, although I’m not sure of those details.’

Robert Cowell had flown spitfires in the Second World War, raced in the Belgian Grand Prix and fathered two children when he decided to become a woman.

Her decision to become Roberta, in the first surgery of its kind in Britain, was inspired by medical student Michael Dillon, the first woman in the world to become a man. 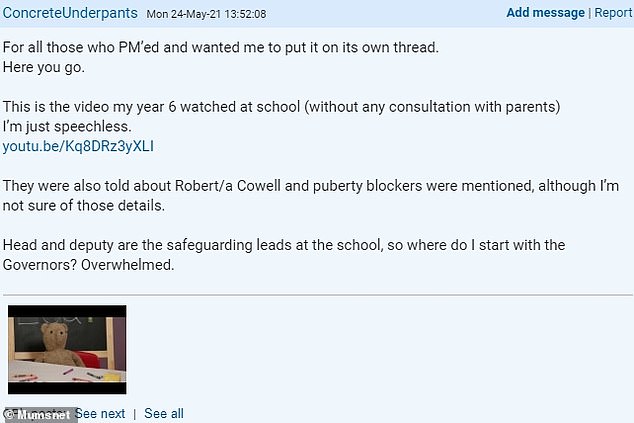 Posting on Mumsnet, the mother shared a link to the video and revealed she’s planning to complain to the Governors

Dillon fell madly in love with Cowell and agreed to illegally castrate her before a pioneering surgeon gave her the vaginoplasty which completed the transition in May 1951, when she was 33.

The irate mother continued: ‘Head and deputy are the safeguarding leads at the school, so where do I start with the Governors? Overwhelmed.’

The mother created the thread after briefly venting frustrations about the clip in a separate post asking for advice ahead of a meeting at her child’s school about its PSHE Jigsaw programme.

At the time, she wrote: ‘This morning I found out that the year 6s have already been shown a video (YouTube I think) basically saying you can be born in the wrong body.

‘I knew absolutely nothing about this but apparently a few other parents complained. School just apologised and agreed they should’ve consulted parents. Am f****** livid now. Get out of my f****** way!!’

Fellow commenters agreed that the video shouldn’t have been shown without consent from the parents and urged her to complain.

Multiple users criticised the video for saying that doctors assign gender, saying this is not true and that they note biological sex, and not  a ‘gender stereotype’, arguing that ‘sensible biology teachers out there must be screaming’.

One wrote: ‘I’m queer and often disagree with much of the trans chat on here, but I have to say I don’t agree with telling kids that doctors get it “wrong” sometimes when a baby’s born’

Another said: ‘Is it a local authority school? Can you complain to the Local Authority as well as the Governors? It’s really shocking and undermines trust in the medical profession.’

A third added: ‘I would raise a formal complaint through the school’s complaint process and follow through each stay (through to, hopefully, a panel with two governors and an external person) potentially right through to reporting to DofE.

‘Also, write to all the governors and ask for your letter to be sent to each and every governor (so you are not just blocked by the Chair).’

However, others argued children need to learn about transgender issues and praised the school for showing the video.

One person wrote: ‘It’s important to teach children to be tolerant and accepting. That includes teaching them that LGBT people exist. As someone who was once an LGBT child, I’d have benefited greatly from knowing that I’m not ‘abnormal’ and that there are others like me. The video is great. More of this sort of thing.’

‘I think it’s quite a useful little film and it’s a good thing that this is being raised with 11-year-olds. My son of that would age would certainly know what it means to “identify as a certain gender”,’ another said.

‘I often chat to my kids about issues raised by alternative gender identities. It offers a chance for us to discuss the ramifications for feminist concerns such as women-only safe spaces (which are often raised on this forum and which do matter to me).

‘They need to be exposed to lots of viewpoints and collect as much information as possible to be able to consider this complex social situation from all angles and treat everyone with respect, as they get older and can think in more sophisticated ways.’