A MUM has shared stunning before and after pictures of her hallway after she gave it an incredible Moroccan-style makeover and created an under the stairs ‘book nookie.’

Shannon Gibson, 25, from Norwich in Norfolk said she was desperate to transform the old-fashioned hallway into a light and airy space. 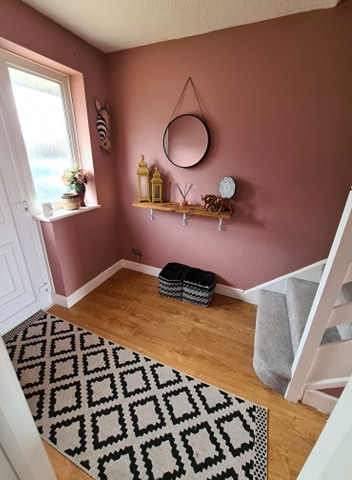 Her previous hallway was a ‘bright banana yellow’ colour and the mother joked she sometimes needed to wear sunglasses to walk through.

She felt it was ‘bland, boring and needed some character.’

The stay-at-home mother-of-three also created a cosy ‘book nookie’ under the stairs for just £50 using her son’s cot mattress as a comfy seat as she moved him to a bigger bed.

Sharing her transformation on Facebook, Shannon wrote: "Before and after of my hallway! I wanted to go for something that was warm and cosy in the winter but also light and airy. 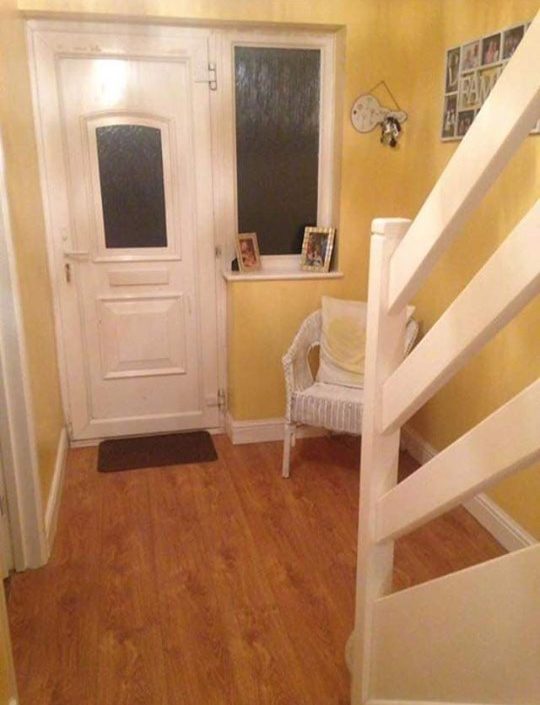 "I'm absolutely in love! Under the stairs used to be just a big open and empty space, I didn't have a before photo to show."

The post instantly raked up hundreds of likes and comments with strangers totally impressed with Shannon’s clever use of the under the stairs space.

The mother, who has children aged two, six and 10, wanted to create a Moroccan style hallway that was reflective of her personality.

She said the idea came to her ‘out of nowhere’ when she was trying to sleep one night and she woke up itching to get started on the DIY project.

She said: "I wanted something that was warm and cosy in the winter but that was still light and airy in the summer. I feel like I have really accomplished that. 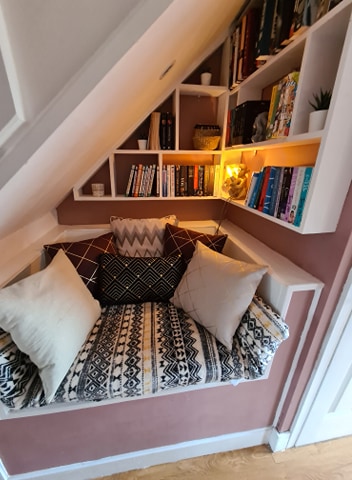 "I knew moving into our home a little over a year ago that I wanted to change the hallway. It's the first room people walk into when coming into the house.

"The Moroccan idea came to me out of nowhere when trying to get to sleep one night. The next morning I was itching to get started!

"The book nookie under the stairs I saw on Pinterest a couple of years ago. I used to be a massive reader and my stepdaughter is a massive book worm so it really suited us.’

Shannon and her husband started the under the stairs transformation first. The space was previously a big empty area that the family used as a ‘dumping ground’.

Her husband James framed the area to separate it and created a small cupboard to the left and under the seat storage space. 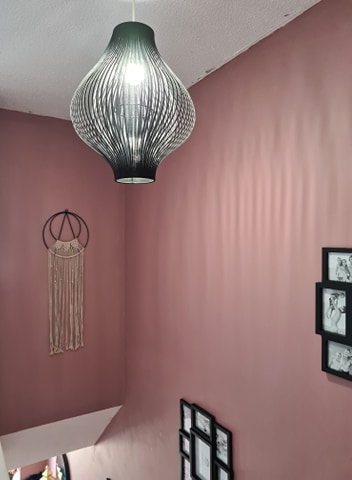 He then used MDF to finish it all off before making the shelves to size and fitting them.

Shannon then stepped in and helped with painting and glossing.

She said: "We used our son's cot mattress as a seat cover as it was in such good condition and then started dressing it with a cover and cushions. We then found books to fill the shelves.

"Once the book nookie was completed we then went onto getting the hallway walls painted.

"My husband cut the floating shelves to size and I sanded and varnished them. We cut the downstairs wall art to the size and shape I wanted, and then gorilla glued the four planks together before leaving it to dry overnight. 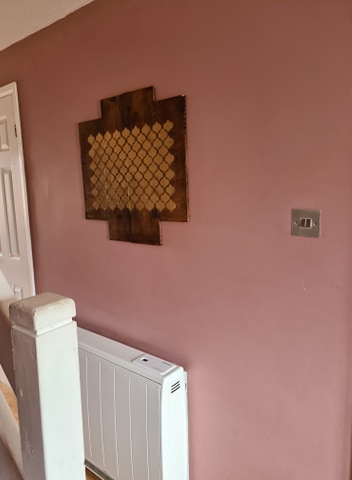 "I used a stencil and spray painted over. It was just a little cheap idea to fill the wall space."

The mother originally looked at some art work online but couldn't afford the hefty prices – so decided to give it a go herself.

Shannon said the DIY makeover didn’t cost as much as she thought it would. She used decor from B&M and purchased a round mirror from Dunelm from £10.

She also bought bargains from The Range including £12.99 wall art and a £7 lamp shade.

The mother added: "My husband made the two floating shelves from leftover wood and the wall brackets were from our local hardware store for £1.49 each. 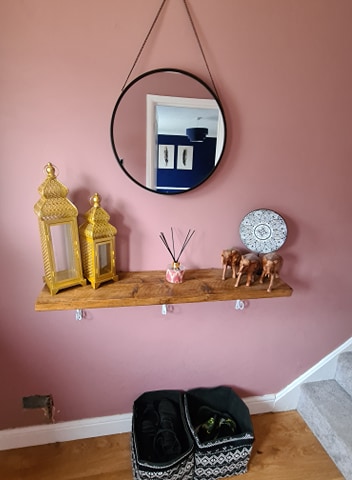 "The book nookie shelves were all made from leftover MDF we had in the garden and some spare paint we had. The framework to make the actual seat was made from £2 B&Q batons."

The family used second hand wood they found outside the exit of B&Q which you can take if you make a donation to the charity.

Shannon said they opted to buy a washable paint for the hallway from the B&Q range as with three young children – they are always finding handprints on the wall.

The whole DIY project transforming the hallway into a quirky Moroccan style cost no more than £130 and the cosy under the stairs book nookie cost £50 to create. 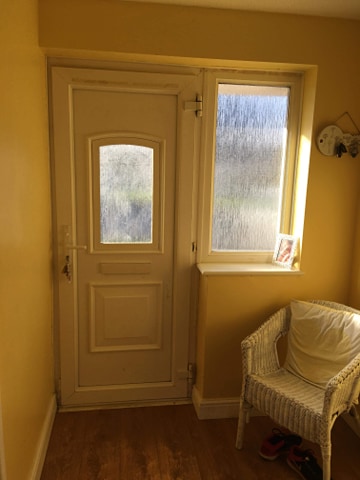 She said: "It definitely took longer than I really wanted, but my husband built the nookie in between working full time and having the three kids at home – he couldn't spend all day every day doing it.

Despite the under the stairs book nookie being the most challenging part, the couple both felt it was worth the wait. 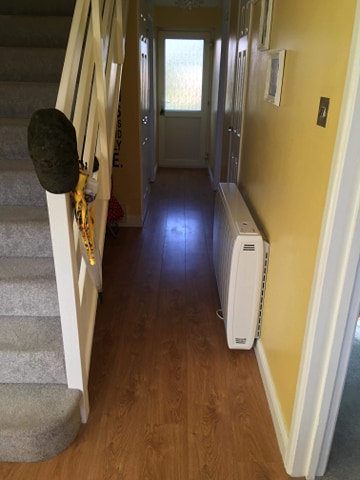 Despite the under the stairs book nookie being the most challenging part, the couple both felt it was worth the wait.

The mother said shopping for the house is her favourite thing to do and she has really enjoyed the whole process.

She added: "I just love how much character it's got now. Everywhere you turn, there's something to look at. 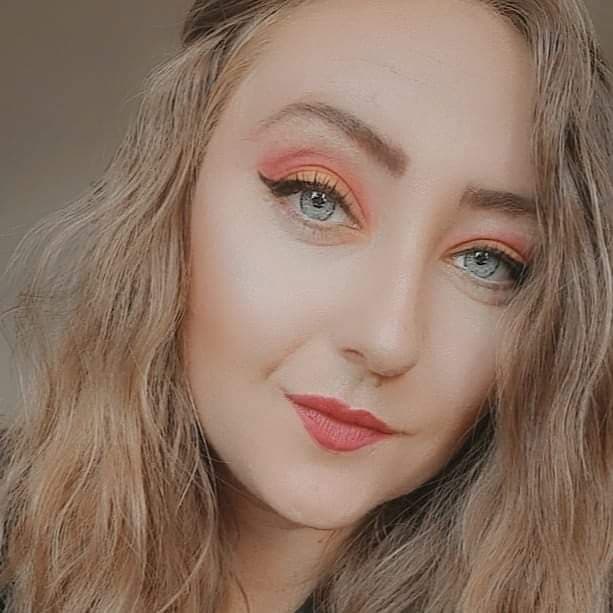 "It's not just a hallway where people walk through to another room but because of the book nookie, it's a chill out zone.

"You can get comfy with a blanket, put your feet up with a coffee or a glass of wine and sink into a book. Under the stairs is just a little mini space for time to yourself.

"The built-in storage we’ve created is really helpful too." 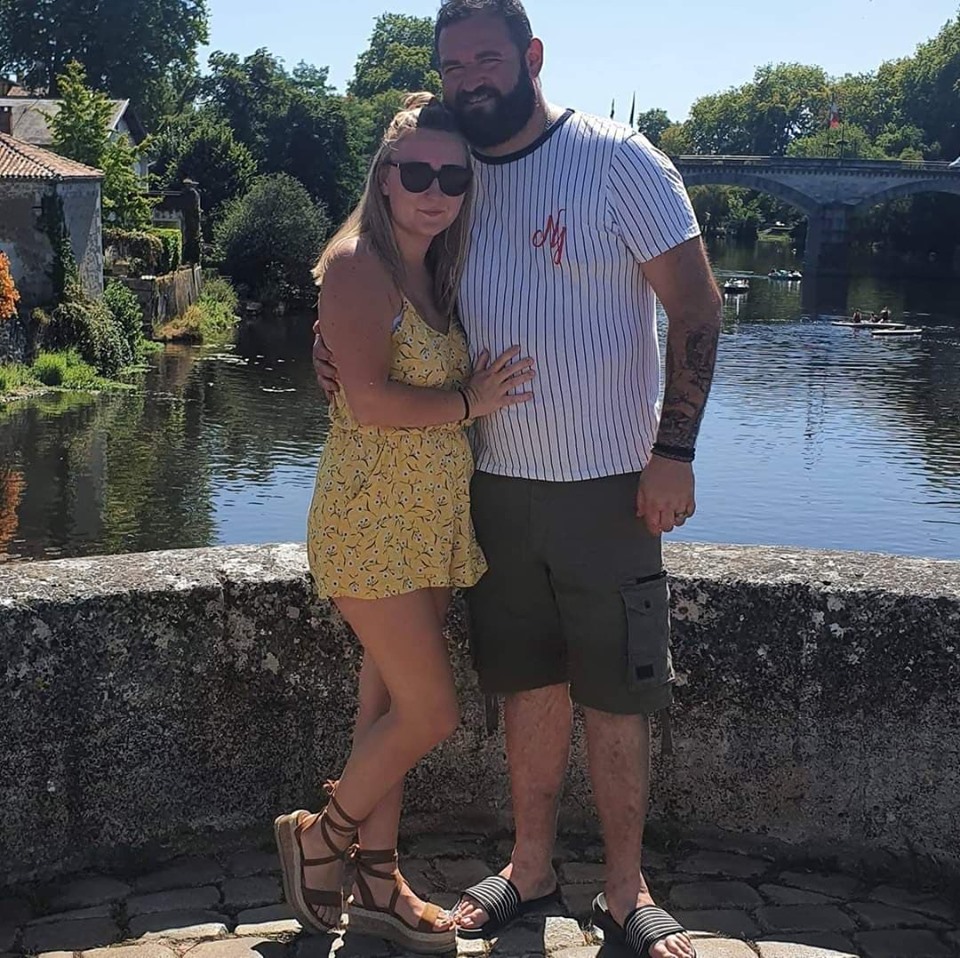 The family now have a small cupboard to store their carpet cleaner and wellies – while they can also lift the seat to find bigger storage space (which is currently home to James’ tools).

One person wrote: "Love the reading nook under the stairs. I would love a place like that in my house but there’s nowhere to put one."

While a second added: "Love the Daybed. This is a brilliant idea."

For more cheap DIY home makeover inspiration, find out how one woman turned her bland house into the most stylish on the street with simple paint job & added thousands to the value.

Meanwhile, a new mum broke down in tears during £500k Grand Designs renovation – after fearing her cancer-stricken husband wouldn’t live to see it finished.

Plus shoppers are raving about blinds from Wilko which they say can fit any window.