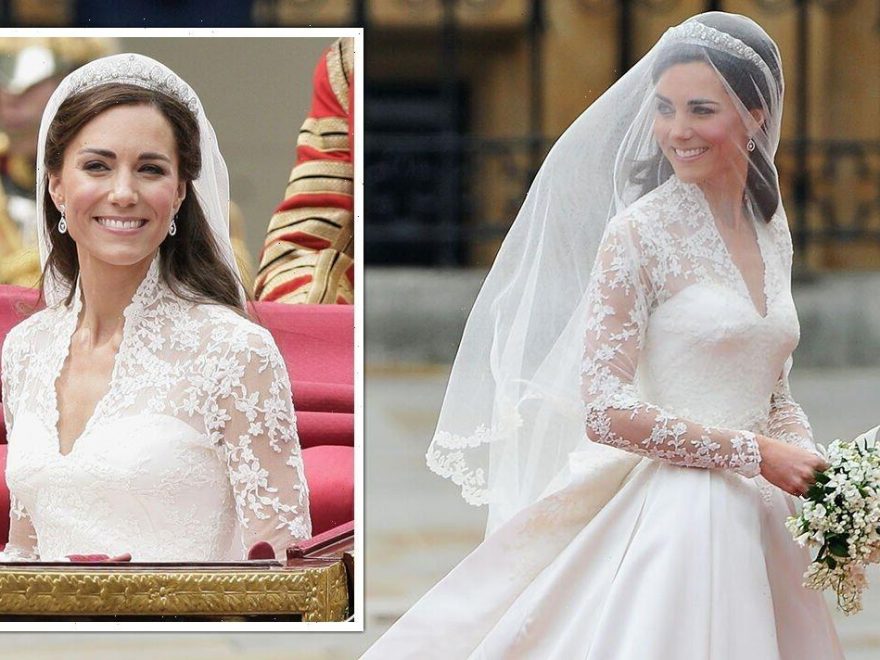 The Cartier Halo Tiara is a stunning diamond diadem in the Queen’s jewellery collection, and its most “iconic moment” came when it graced the head of royal bride Kate Middleton upon her marriage to Prince William in 2011. Before this point, the tiara had been worn by other Royal Family members but never publicly by the Queen.

Daena Borrowman, Marketing Manager at jewellerybox, told Express.co.uk the tiara was acquired by the Queen when she was still known as Princess Elizabeth.

Ms Borrowman explained: “The Cartier Halo Tiara made up of 739-brilliant cut diamonds and 149 baguette diamonds is also dubbed the ‘Scroll Tiara’ due to its 16 graduated scroll elements.

“King George VI commissioned Cartier to create the tiara using the diamonds and platinum he had purchased for his wife three weeks before their coronation.

“Queen Elizabeth II was given the tiara as an 18th birthday present and went on to lend it to the Duchess of Cambridge to wear on her wedding day when the tiara had its most iconic moment. It is now worth more than £1million.”

Princess Elizabeth may have worn the tiara at private royal events, but she’s never been publicly pictured wearing it.

According to an expert, the reason why the Queen has never worn the Cartier Halo Tiara is unconfirmed, but there are several theories.

Kate Beavis, owner of the contemporary wedding blog Magpie Wedding, told Express.co.uk: “The Cartier Halo Tiara was made in 1936 for the Queen Mother but when handed down it was not worn by our Queen – some say because it wasn’t grand enough, and others that it was felt to be too showy when she received it during the war for her 18th birthday in 1944.

“However, her sister, Princess Margaret wore it a few times.”

After the war, then-Princess Elizabeth only had a few years before her father King George VI died in 1952 and she became Queen.

After this point, she often opted to wear the most regal pieces in her jewellery collection, including the Girls of Great Britain and Ireland Tiara or the Grand Duchess Vladimir Tiara.

Had she been a Princess for longer, Elizabeth may have opted to wear her smaller Cartier Halo Tiara at public events.

In addition to the Queen’s sister Margaret, other royals who have publicly worn the Cartier Halo Tiara on occasion include the Queen Mother and the Queen’s daughter Princess Anne.

The Queen traditionally lends a tiara from her collection to a royal bride on their wedding day.

Princess Anne and Princess Beatrice both wore Queen Mary’s Fringe Tiara that the Queen herself wore upon her 1947 marriage to Prince Philip.

Princess Eugenie wore the Greville Emerald Kokoshnik Tiara when she married Jack Brooksbank in 2018, which drew favourable comments for how it complimented her green eyes.