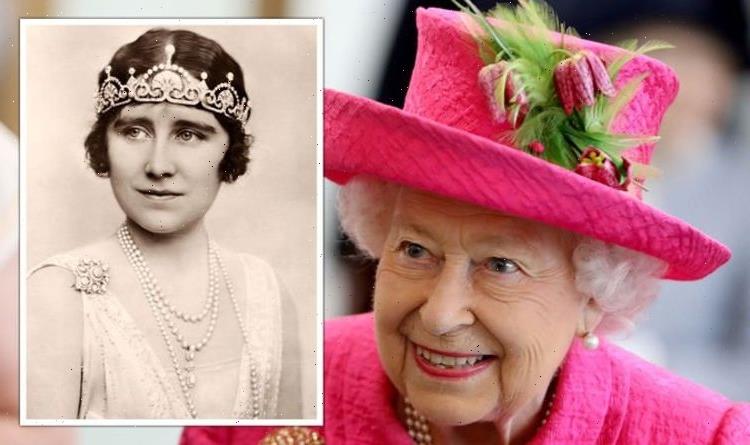 The Queen inherited tiaras from several generations of royals when she ascended the throne in 1952. The Queen is known to have favoured tiaras that she often wears, so there are plenty in her royal collection which are rarely seen. One tiara the Queen doesn’t wear is the Lotus Flower Tiara, but it likely has emotional significance as it once belonged to the Queen Mother.

What is the Lotus Flower Tiara?

The Lotus Flower Tiara was actually a necklace before it was a tiara.

The future Queen Mother was gifted the necklace upon her marriage to the future king, George VI.

The Queen Mother had her husband’s gift dismantled and turned into a stylish new tiara.

The tiara is named for its lotus flower design, which features several diamonds.

Daena Borrowman, Marketing Manager at jewellerybox, told Express.co.uk: “The Lotus Flower Tiara takes its name from the striking lotus flower elements that characterise the piece which also features overreaching arches and a single pearl at its pinnacle.

“Queen Elizabeth, the Queen Mother had the tiara commissioned from a Garrard’s diamond necklace she received as a wedding present from her husband.

“It is one of the more versatile royal tiaras that could be worn lower on the forehead as well as high atop the head in a tall hairdo.”

Over the years, the Lotus Flower Tiara has been a firm favourite for many royals.

In the past, the Queen’s sister Princess Margaret was known to favour the tiara.

In recent years, it has been worn on occasion by Kate, Duchess of Cambridge.

DON’T MISS:
How Zara honoured grandfather Prince Philip with break from tradition [ANALYSIS]
Queen’s iconic tiara from Queen Victoria is ‘steeped in royal history’ [PICTURES]
Inside the story of Queen’s ‘favourite’ tiara, and how much it’s worth [INSIGHT]

Nilesh Rakholia, Director at ABELINI Jewellery, told Express.co.uk: “Now as a tiara, its strong art deco influences are clear through the prominent arches and fans.

“Since its creation, it has been worn by the ever-glamorous Princess Margaret and the Duchess of Cambridge.”

The tiara was also worn at a royal wedding in the 1990s.

Serena Stanhope wore the creation in 1993 for her wedding to Viscount Linley, Princess Margaret’s son and the future Earl of Snowdon.

How much is the Lotus Flower Tiara worth?

The Lotus Flower Tiara is worth a truly staggering sum.

Mr Rakholia added: “This unique tiara is estimated to be worth around £4million.”

But like most tiaras in the royal collection, the Royal Family is unlikely to part with this historical piece.