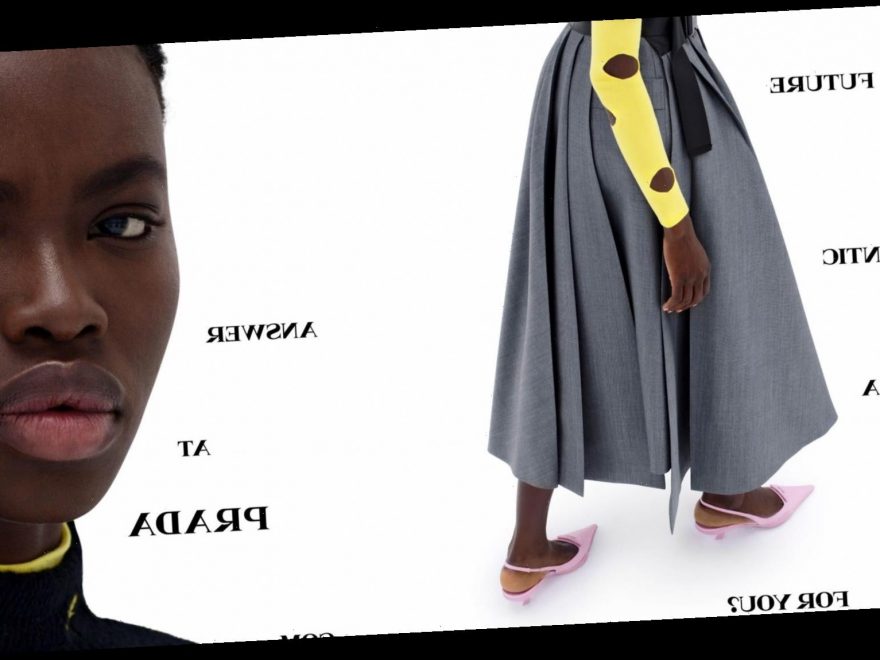 Last week, in a move that seemed surprising even during such unprecedented times, Bottega Veneta, the Kering-owned luxury brand worn by every magazine editor and influencer the world over, and with over 2.5 million followers on Instagram … deleted itself from social media. The same day, Italian fashion powerhouse Prada released its campaign for S/S21 – the first since Mrs. Prada welcomed Raf Simons into the family fold as her co-creative director. Rather ominously "photographed by no one," according to a release, the campaign sees images of models against a stark white backdrop wearing the latest collection, which have then been overlaid with typography. The text poses such questions as: "Is nature out there in here?", "Is future a romantic idea for you?" and "Does 'cloud' make you think of data or sky?", with a call to action to "answer at Prada.com."

Only a few days into 2021, both brands had already set the fashion industry's tongues wagging. First of all, what was Bottega Veneta's thought process behind such an abrupt departure from all social media platforms? (This included Facebook, Twitter, and most interestingly of all, Instagram, an app that brands heavily rely on to solidify their image, market new product, and – thanks to the app's recent update – even make sales.) And what statement was Prada trying to make with such a mysterious yet interactive ad campaign?

'Fashion Twitter' was, of course, the first to weigh in, with swiftly created memes parodying Prada and jokes such as 'the ultimate luxury is not existing!' quipped about Bottega's sudden Insta-absence. Not long after, media outlets began picking up on the conversation as news: 'Can't Wait for the Memes on These Existential Prada Ads', said Paper Magazine, with WWD simply asking in its headline: 'Where Has Bottega Veneta Gone?'

In a way, the answer lies in the furor itself. With the fashion world trying to navigate its way through a global pandemic, and very little to look forward to by way of show seasons, the future of the industry as it once was is increasingly uncertain. We are all waiting for something 'big' or 'different' to take place – and Prada and Bottega Veneta have certainly tapped into this mood. London-based strategist Izzy Farmiloe, who investigates how brands behave for a living, has some thoughts of her own on Bottega Veneta's actions in particular. "I know we've all been laughing at the fact that it's a 'shocking' move, but really it is quite shocking," she says. "It's got people talking, at least. I think having a sense of autonomy and privacy is what is powerful in 2021," she continues, noting that the brand's creative director Daniel Lee has never had a social media account himself, and is even nicknamed "the quiet radical."

But questions have been raised over whether this 'radical' move is a lasting one, as up until a few days ago, Kering's website was advertising for the role of Global Social Media Manager. With the job listing now deleted, Farmiloe concludes that it is a bold step to take for a brand of their stature, for however long it may be. "People want to see something different from the fashion world – brands need to take back control of their own narrative and not be afraid of being 'disliked.' And that's what social media can do – it can make you want to go for quantity rather than quality, and it's where creativity and progress can be stifled." Certainly, for Bottega – a name that has become synonymous with influencer and celebrity culture, and whose designs are endlessly emulated by smaller and fast-fashion brands – removing itself from the lion's den marks a strategic shift away from the very thing that has helped to create it. So, back to Prada, which seems to be taking the opposite approach and reaching out to its customer (the campaign itself is even titled Prada Dialogues). For a brand that has always possessed a subtle air of 'you can't sit with us,' encouraging direct interaction from its consumer is obviously a change in tack. Stylist and creative consultant Didier Wong Kung Fong thinks that the campaign is aiming to reflect the moment we're all living in; a time where we're craving connection and thinking about the 'bigger questions.'

"The Prada campaign is very much reflecting the existential crises we've all been going through in 2020," he says. "Prada has always been an exclusive brand – it's very chic and unattainable. It's not for everyone. And this feels like Prada trying to reach out to people, albeit in their own way. So it feels like a humane touch from them." Whether Prada has succeeded in doing this is left open for discussion – and conversation is something that the brand clearly wants to encourage. As Dazed wrote of Prada Dialogues and the subsequent memes that followed: "We're just thankful it sparked some joy on our feeds." With just under 12 months of the year still left, let's hope for more fashion moments that do the same.