It’s Britney night, baby! Tyra Banks went all out to pay tribute to the pop star with two fabulous outfits for the October 4 episode of ‘Dancing With the Stars.’

Britney Spears was the lady of the hour on the October 4 episode of Dancing With the Stars. The entire episode was dedicated to the pop star, with the remaining couples all dancing to iconic songs from her music catalog. Of course, host Tyra Banks had to get in on the fun, too, by dressing up in two Britney-inspired looks for the show. 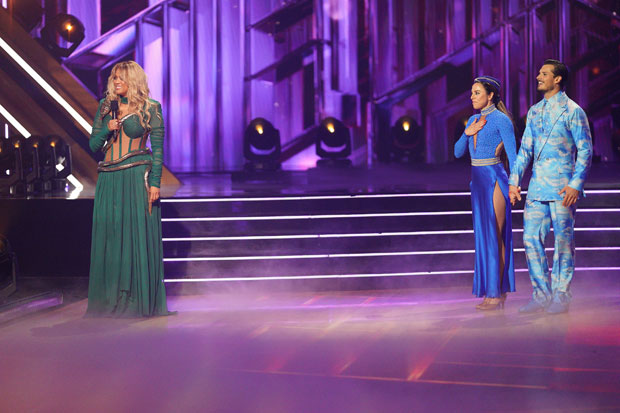 She started the show with an homage to Britney’s “…Baby One More Time” music video. She rocked a gray sweater with a white collared shirt underneath. She also had on a black mini skirt with a cape, tights, boots, and styled her hair in pigtail braids.

Midway through the episode, Tyra changed her outfit. Her second look was a tribute to Brit’s “I’m A Slave 4 U” music video. Tyra donned a fitted green gown that was adorned with a bedazzled snake. The bodice part of the dress featured sheer paneling.

Britney night on DWTS comes just days after a judge ruled that the 39-year-old’s father, Jamie Spears, would be suspended as her conservator. She’s also celebrating her recent engagement to longtime love, Sam Asghari.

The episode featured first in Dancing history, as Cody Rigsby and his partner, Cheryl Burke, performed virtually — and SEPARATELY — from their respective homes. Cody and Cheryl both tested positive for the coronavirus, despite being fully vaccinated, and took the necessary quarantine precautions to keep the rest of the cast, crew, and audience safe. However, the show must go on, so Cody showed off his dance moves for Britney solo as Cheryl danced from her own living room as well.

It’s the third week of competition on the show’s historic 30th season. Martin Kove was the first celebrity eliminated during last week’s episode. Bling Empire star Christine Chiu was the second celebrity to be eliminated.