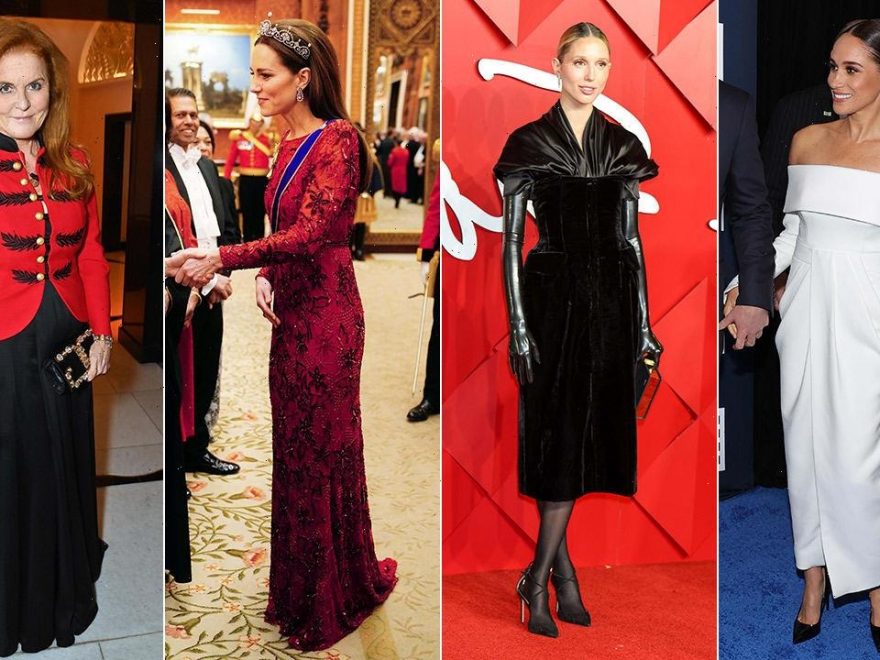 It’s fair to say the royals brought the *drama* this week, and we don’t just mean with their inter-family dilemmas. Dramatic silhouettes, royal red tones, gothic sensibilities – you name it, the royals wore it.

ROYAL STYLE: Princess Kate wows in red sequins as she glitters in SECOND tiara moment of the year

The Princess of Wales went all out in a glittering red gown by Jenny Packham, coinciding with Sarah Ferguson’s decision to don a crimson military-style jacket while out with her daughter Princess Beatrice. Queen Consort Camilla was another cherry red champion, showcasing a vibrant winter-ready look as she greeted crowds.

Duchess Meghan amped up the Hollywood glamour in a white off-the-shoulder number by Louis Vuitton and Princess Olympia of Greece commanded attention at The Fashion Awards in Richard Quinn. Queen Rania of Jordan followed in a similar vein, opting for monochrome over a colourbomb aesthetic.

Want to see more? Who could blame you. Scroll on to uncover some simply divine outfits from our favourite royals…

The Princess of Wales attended a white-tie Diplomatic Reception at Buckingham Palace on Tuesday night. For the smart occasion, the royal wore a carmine-coloured, sequin gown by one of her go-to designers for eveningwear, Jenny Packham. Coined the ‘Elodie Gown’, Kate’s dress was paired with the late Queen Elizabeth II’s earnings and her beloved Lotus Flower tiara.

Meghan Markle made a dazzling return to the red carpet, arriving hand-in-hand with Prince Harry at the Ripple of Hope Awards in NYC on Tuesday night. The royal wore a heavenly Louis Vuitton dress created by Nicolas Ghesquiere that was reminiscent of a certain black dress worn by Princess Diana in 1994 to a Vanity Fair party which ‘broke’ royal protocol.

TRENDING: Harry & Meghan look carefree as they are seen for first time since Netflix controversy

Princess Beatrice attended The Lady Garden Gala 2022 at Claridge’s Hotel on Tuesday, alongside her mother Sarah Ferguson and husband Edoardo Mapelli Mozzi. For the opulent event, Princess Beatrice took style inspiration from The Princess of Wales, sporting one of Kate’s favourite luxury labels for the public outing.

Queen Consort of Camilla was a Christmas dream in carmine

Queen Consort Camilla engaged in some Christmas tree decoration with children supported by Helen & Douglas House and Roald Dahl’s Marvellous Children’s Charity at Clarence House. The royal looked stunning in scarlet as she showed off a striking dress ensemble, complete with a black cape for an extra dose of drama.

Sarah Ferguson joined her daughter at The Lady Garden Gala 2022 in Claridge’s Hotel, looking ravishing in a red jacket. The piece, coined the ‘Renata Military Blazer’ by The Extreme Collection, was paired with a black maxi skirt and a Dolce & Gabbana clutch bag to craft a festive yet avant-garde winter combination.

The daughter of Crown Prince Pavlos and Princess Marie-Chantal of Greece graced the scene at The Fashion Awards 2022 in London, aptly sporting one of Britain’s hottest designer pieces for the highly anticipated bash.

The socialite alluded to her royal status as she stepped out in Richard Quinn, one of her go-to luxury labels for evening attire. Her outfit of choice materialised in the form of an ebony-toned velvet midi dress, complete with a satin caped shoulder and paired with Quinn’s signature latex gloves.

Never one to snooze on the outerwear, Queen Rania looked magnificent in a unique yet elegant ‘Ombré Belted Trench Coat’ by Fendi. An unexpected pop of print manifested itself in the form of a Louis Vuitton polka dot handbag that infused her monochrome outfit with some playful primary colours.