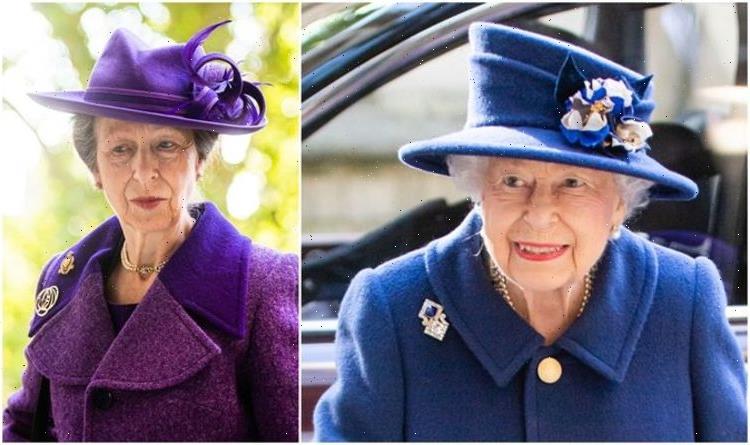 Queen Elizabeth II and Princess Anne both looked lovely as they arrived at Westminster Abbey for the Thanksgiving service. The service is to mark the centenary of The Royal British Legion. Her Majesty appeared to be wearing a dress with large, beautiful prints, under a royal blue coat.

The print design was blue, turquoise and gold in colour, and almost looked like royal crests all woven together to make a beautiful printed dress.

The Queen donned a royal blue coat with stunning gold buttons down the front of it.

The coat was collared and the Queen paired it, as she usually does, with a matching hat, fit for the royal occasion.

The hat featured a blue and white flower and even was accessorised with little gold details.

READ MORE:  Why Kate Middleton is banned from eating potatoes

The monarch appeared to be wearing a gold necklace chain, accentuated with blue jewels and also was sporting some lovely pearl earrings.

Queen Elizabeth was also styling a lovely sapphire brooch, which was surrounded by jewels in the shape of two diamonds on top of each other.

She was also wearing her favourite red lipstick for the occasion from the brand Elizabeth Arden, which costs £22.

Princess Anne also looked lovely, dressed in a purple coat similar to her mother’s, except Anne’s coat had a navy collar which was a different colour to the rest of the coat.

The Princess Royal wore a pearl necklace, as well as a matching purple hat with beautiful feathers on top.

She was slightly more accessorised than the Queen, for Princess Anne was wearing two brooches as she entered the Abbey.

One brooch was golden in colour and looked to illustrate a crown and sceptre, and the other was also golden, but a more intricate circular design with mini circles all surrounding each other in plated gold.

Both royals often wear hats and brooches for such special services.

The monarch and Anne smiled brightly as they arrived at Westminster Abbey for the ceremony.

The event highlights the charity’s work to support servicemen and women from the UK and Commonwealth countries.

Both mother and daughter were wearing black gloves for the event.

The Queen was also using a walking stick as she stepped out of her car.

The monarch has been pictured with a walking stick before, including in 2003 following an operation to remove torn cartilage from her right knee.