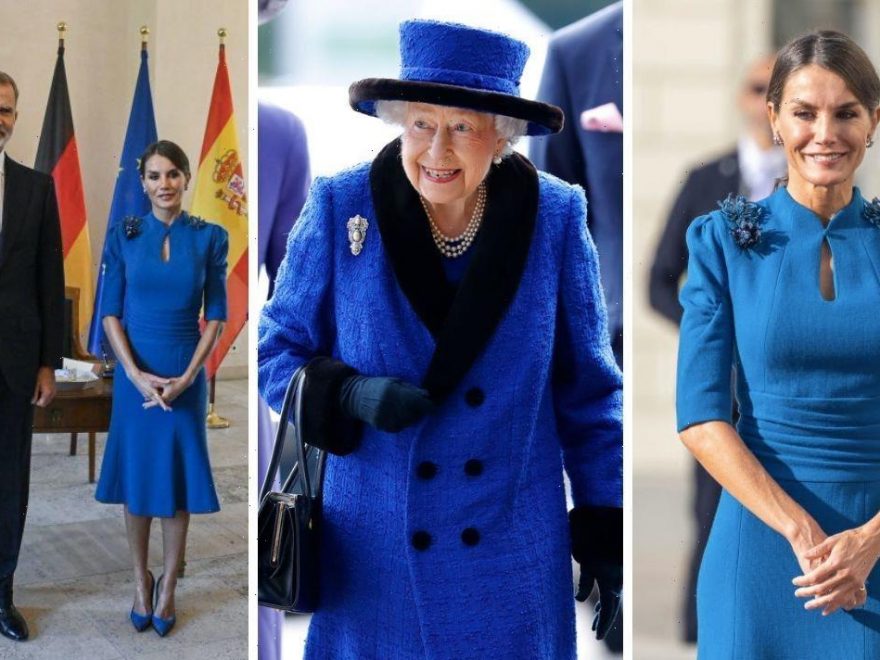 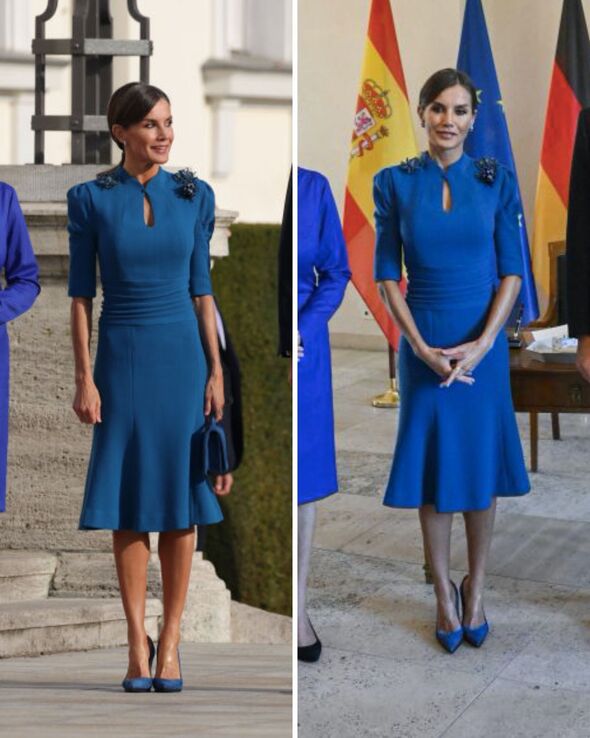 Queen Letizia is rarely a style miss, and continually wows royal fans with her chic looks. Today she channelled Kate Middleton in one of the Princess’ go-to designers, Carolina Herrera. Her look also showed similarities to the late Queen Elizabeth II.

The Spanish Queen looked regal alongside her husband as they met with German President Frank-Walter Steinmeier and his wife Elke Buedenbender.

She wore a royal blue dress with statement shoulders, a nipped in waist and fishtail skirt.

The dress boasted a high collar and some adornments across the shoulders.

These appeared to be flowers in a slightly darker shade of blue, and added some dimension to the dress.

For another pop of colour, there were little flecks of purple throughout, protruding from the dress in spikes.

It had a striking keyhole neck, unveiling just a little bit of skin, and some ruching around the waist also accentuated the Queen’s figure.

The 50-year-old monarch took a leaf out of Queen Elizabeth II’s book by dressing head-to-toe in one colour – royal blue.

She accessorised with a pretty clutch in the same shade as the dress, in addition to her shoes.

The late Queen was known for her fashionable monochromatic looks.

She would frequently don a coat dress, hat and pair of shoes all in the same colour.

But why did Queen Elizabeth II make this conscious style choice – and might Queen Letizia be doing the same thing?

In the documentary The Queen at 90, Sophie Wessex explained why Britons often spotted the Queen wearing bold colours.

She stated: “She needs to stand out for people to be able to say ‘I saw the Queen’.

“Don’t forget that when she turns up somewhere, the crowds are two, three, four, 10, 15 deep, and someone wants to be able to say they saw a bit of the Queen’s hat as she went past.”

Indeed, the Queen once said that she makes these colour choices deliberately and that if she wore beige one one would recognise her.

As the Queen of Spain, Letizia’s head-to-toe royal blue has the same effect.

Letizia’s blue shoes were suede and had pointed toes, and her bag was petite with a short handle strap.

She wore her hair in a casual ponytail with a parting slightly to one side of her face.

As for makeup, this was very classic, with a touch of bronzer, rouged cheeks, mascara and metallic pink lipstick.