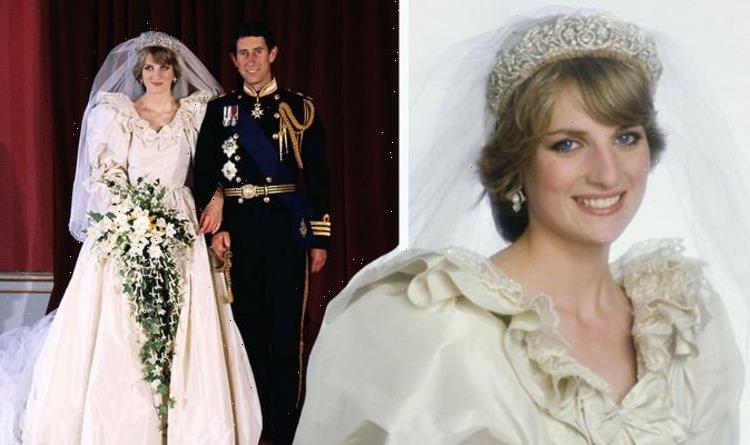 Princess Diana’s wedding dress became one of the most iconic wedding dress of all time. It was often referring to as the “most closely guarded secret in fashion history” because so few details were revealed until its grand debut. Diana’s wedding to Prince Charles took place on July 29, 1981, at St. Paul’s Cathedral in London. She walked down the aisle wearing a creation by husband-and-wife team David and Elizabeth and apparently, the Princess of Wales asked for a special something to be sewn to the inside of her gown.

Recalling the time he was asked to design Diana’s dress, David said: “It was an extraordinary occasion.

He told Tatler in 2017: “She was beautiful, she was divine and it was just a simple phone call – would we do the honour of making her wedding gown.”

As for the details of the dress, it was a silk silk-taffeta fairytale gown with Eighties era-defining puff sleeves.

The train was a whopping 25 feet – the longest in the history of royal wedding dresses.

It was embellished with 10,000 mother of pearl sequins and pearls, reportedly costing an estimated £90,000 at the time.

While the train was certainly a jaw-dropping moment, it was said the entire ball gown and train didn’t quite fit into the horse-draw carriage Diana and Prince Charles sat in.

As a good luck charm, the Emanuels attached an 18-carat Welsh gold trinket to the inside of her dress.

This was reportedly a request made by Diana.

The trinket was a horseshoe studded with white diamonds.

Horseshoes are a symbol of good luck on wedding days.

A matching umbrella in case it rained, was also designed.

David revealed: “It was made of such light material that it certainly wasn’t waterproof…it wouldn’t have done her much good.”

Alongside the dress, the shoes Diana wore also had to be carefully considered.

hey were designed by celebrity shoemaker Clive Shilton and Diana was reportedly conscious not to appear taller than her husband-to-be, since her and Charles both stood at 5’10”.

After six months of collaborating with Clive, they finally agreed on the design.

The shoes were satin and lace slippers, with a low-heel, and intricately decorated with 500 sequins.

100 seed pearls were also included and the suede sole arches were marked with a small ‘C’ and ‘D’ painted under the heel, with a heart added between the initials.

For ‘something borrowed’, Diana wore the Spencer family tiara, while ‘something blue’ was a small bow sewn inside the bodice.