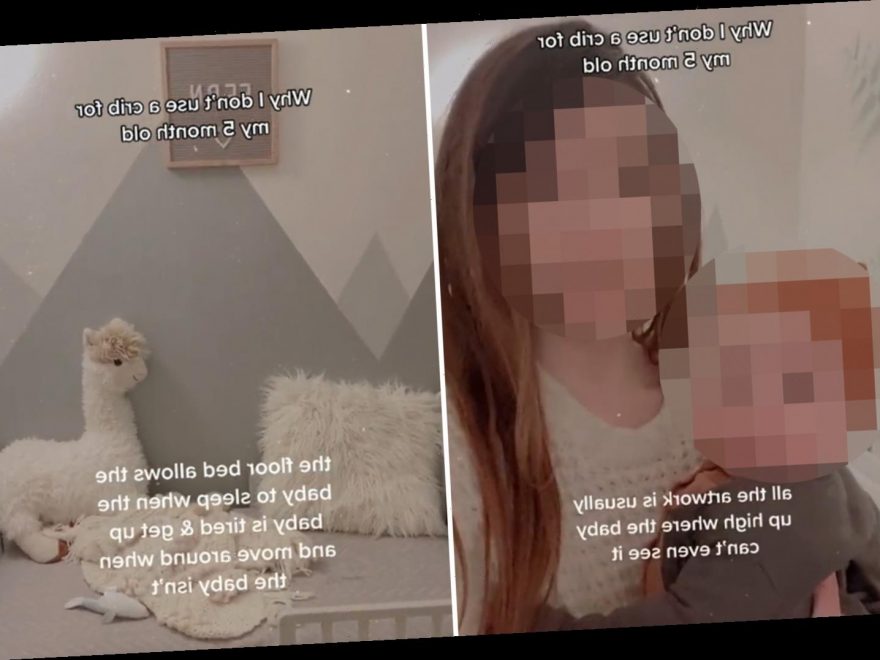 A MUM has revealed her five-month-old baby sleeps in a normal single bed because she believes cots are "tiny jail cells".

The new parent shared her unusual sleeping arrangements on TikTok and claimed that sleep schedules for babies are "inhumane". 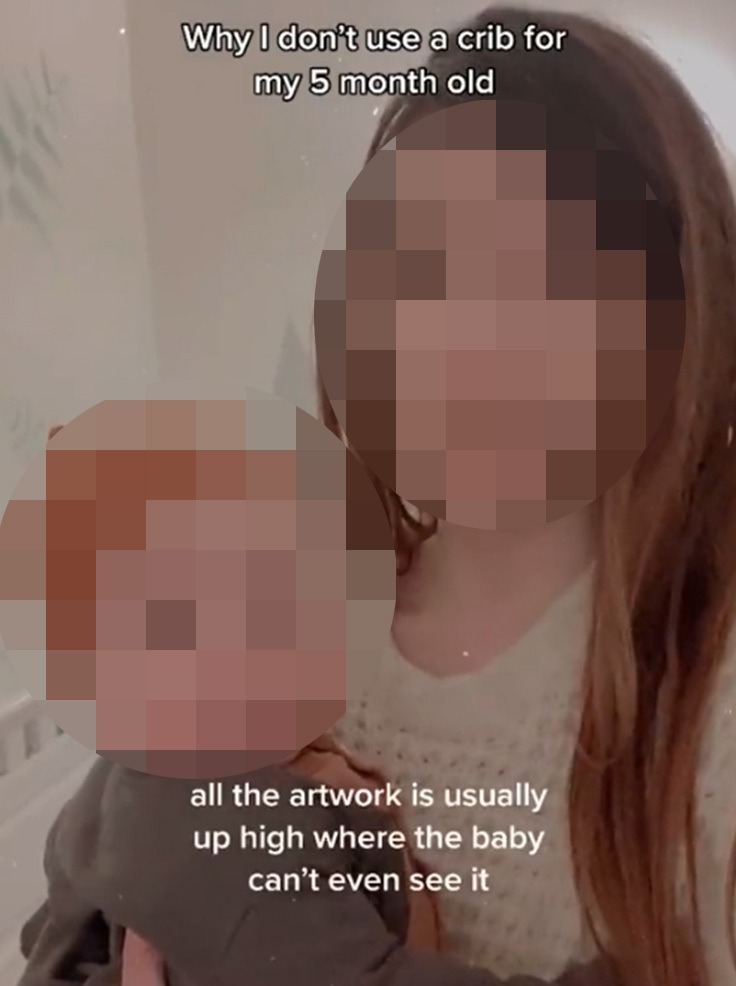 Giving a tour round her nursery, the mum said: "If you look at a typical American nursery, you will notice that it's set up for the parent's benefit, not the child's.

"The artwork is usually up high where babies can't even see it."

What's more, the new parent bought her child a single bed instead of a cot so he can decide whether he wants to sleep or not.

She continued: "We literally buy these little baby jail cells so that we can just leave our baby in there and walk away. 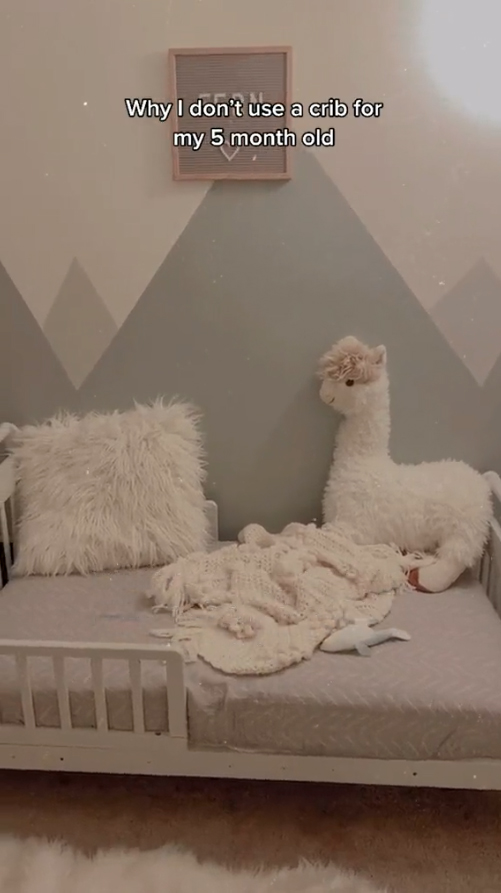 "I don't have a crib because I will never enforce my baby to have a bed time. Babies are people too, and forcing anyone to sleep when they're not tired is inhumane."

What's more, the mum then urged her followers to think about how they'd feel if they were trapped in a cot every night.

She added: "Imagine if your partner locked you in a container you couldn't get out of and told you you had to sleep even though you weren't tired.

"That would be abuse and you'd probably leave them. Kids deserve the right to bodily autonomy just like we do, and this involves sleep."

Co-sleeping is when parents sleep in the same space as their baby, whether this is in bed or on the sofa.

It’s estimated that half of all UK mums will share a bed with their baby at some point during the first few months of their little one’s life.

But according to the National Institute for Health and Care Excellence (NICE), Sudden Infant Death Syndrome occurs more often when parents co-sleep.

The NHS is clear you should NEVER co-sleep if…

In his room, the four-month-old baby has a single bed with a protective railing around one side and the mum says she will also set up a bed on the floor for him too.

Depending on her son's mood, the mum also allowed him to co-sleep in her and her partner's bed too.

The American mum has adopted the attachment parenting method – meaning she has never spent more than two hours away from him.

As part of her parenting approach, the mum wakes up with her son every one to two hours and plans to continue exclusively breastfeeding him. 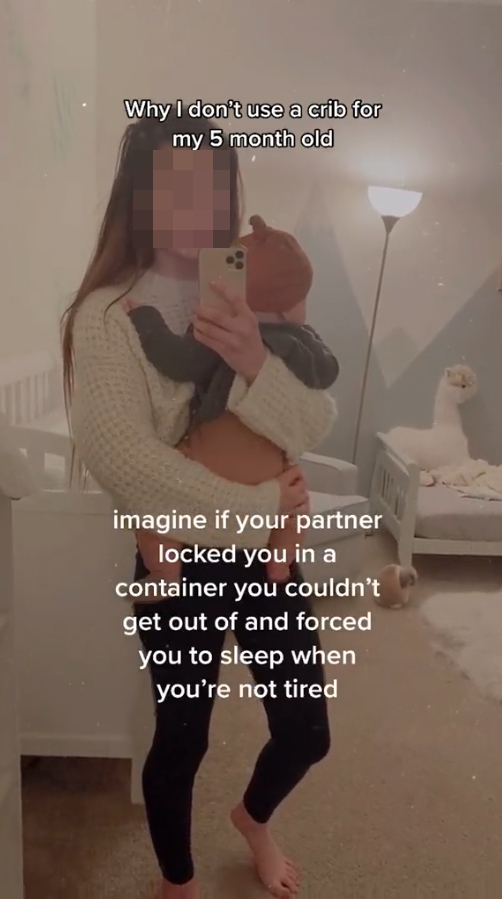 Dr Sarah Jarvis, GP and Clinical Director of Patient Access, told Fabulous: "There has been much concern among healthcare professionals about a possible link between co-sleeping and SIDS (sudden infant death syndrome).

"Research suggests there are particular concerns if parents co-sleep on a sofa with their little one, or if they have drunk more than 2 units of alcohol.

"For babies under 3 months, co-sleeping with a parent who is a smoker also appears to increase the risk of SIDS.

"The National Institute for Health and Care Excellence recommends all mothers should be advised that co-sleeping may make SIDS more likely."

Where is the safest place for babies to sleep?

The Lullaby Trust said around half of parents are unsure of basic steps they can take to reduce the risk of SIDS.

They recommend that babies should be put to sleep on their backs in a cot that is free of bumpers, toys and pillows.

Francine Bates, chief executive of the charity, said: “Twenty-five years after the Back to Sleep campaign, the survey results have shown us we need to go back to basics.”

The Department of Health also states that until a baby is six-months-old, it’s advisable to put them to sleep in a cot in the same room as his or her parents.

For more parenting stories, this mum was left gobsmacked after baby is born with a full head of blonde hair after her husband was adamant he’d be bald.

And this mum went into labour in B&M and the staff had to help her after her waters broke in the home decorations aisle.

Plus this mum-of-five ditched nappies and just holds her babies over the loo or sink when they need to go.