A MUM has been praised for rewriting her daughter's sexist homework.

Lynne Polvino was less than impressed with the exercise her six-year-old daughter Hazel had been given, due to the fact that it blatantly shamed working mothers. 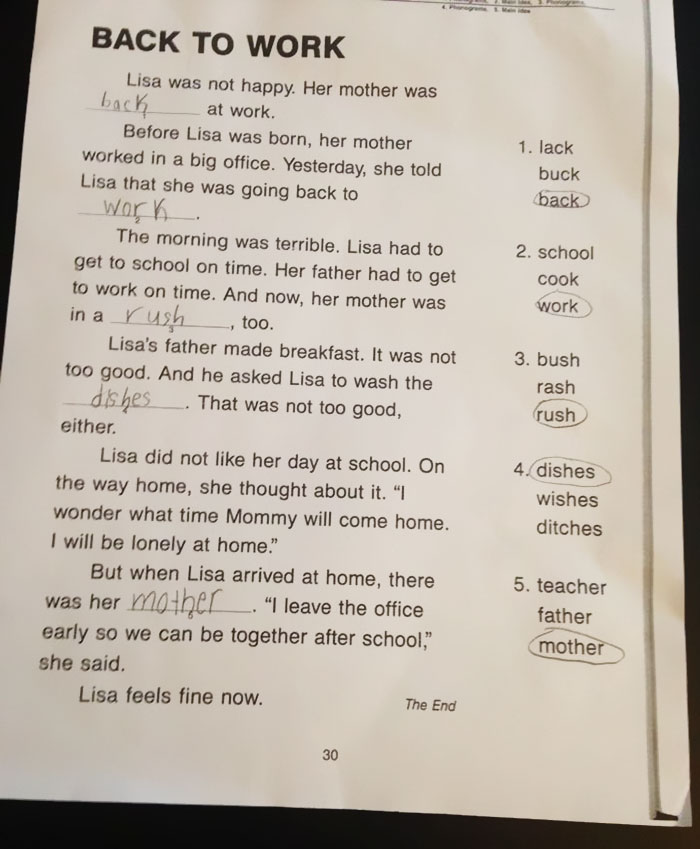 The task involved pupils filling out missing words from a story entitled "Back to Work".

This tale followed a little girl named Lisa, whose mum had recently returned to work.

It described a "terrible" morning, in which Lisa had to wash her own dishes and her father made breakfast – which was described as "not too good".

At the end, Lisa's mother decided to leave the office early so that she could spend more time with her daughter. 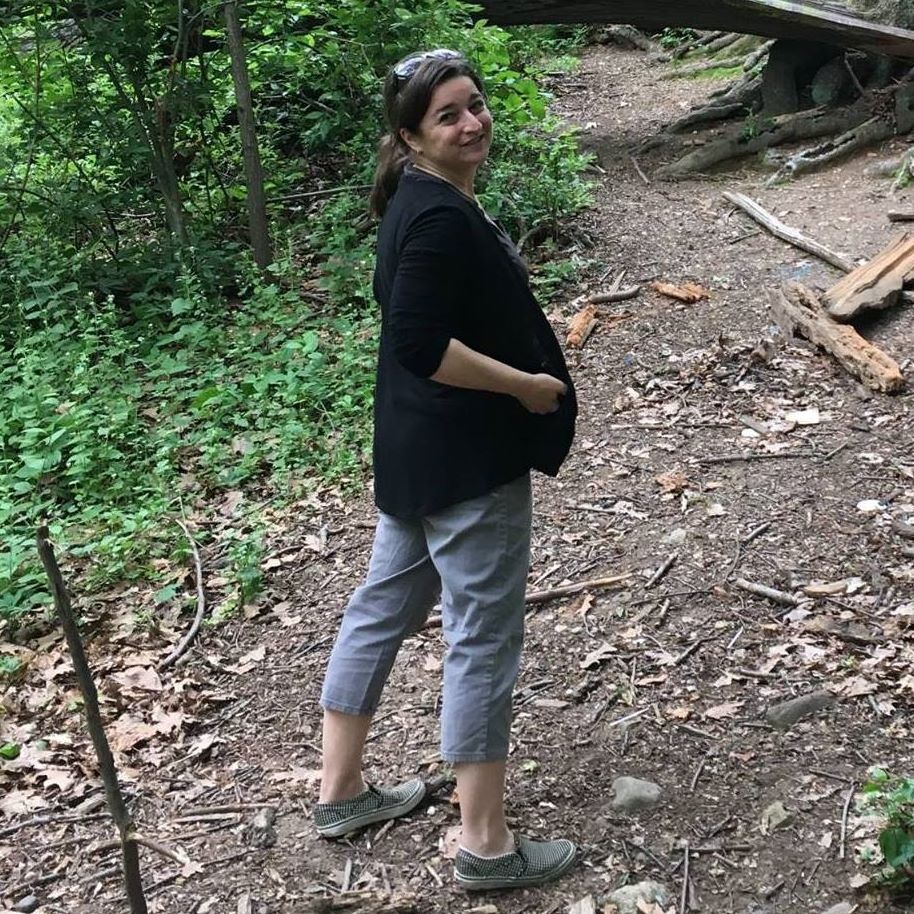 Lynne – from Queens, New York – told TODAY: "It just pushed so many buttons for me. And with each sentence it managed to get worse! My shock and dismay quickly turned to outrage.

"I mean, what decade are we in, anyway?

"In this day and age, we're going to tell kids that mothers working outside the home make their children and families unhappy? That fathers don't normally do things like cook and wash the dishes? 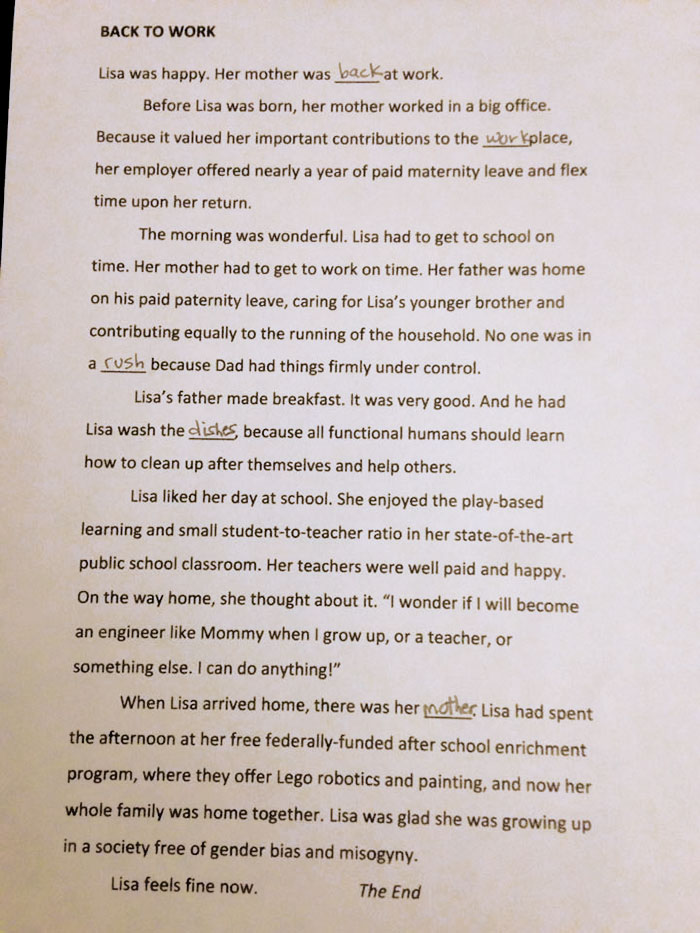 Lynne – who works as a book editor – soon set to work on changing the wording.

She updated the piece to state that Lisa's father made a "very good" breakfast, and that Lisa wondered if she'd be an "engineer like mummy" when she's older.

She added that Lisa was "glad she was growing up in a society free of gender bias and misogyny."

The rewrite has since gone viral, with both mums and dads supporting Lynne's stance.

One person commented on Facebook: "What a great way to react as a mum. And how old and inappropriate was the first fill-in assignment from school?!"

An impressed dad wrote: "You are my hero as we are trying to teach our children that we are partners.

"This is a great message for your daughter." 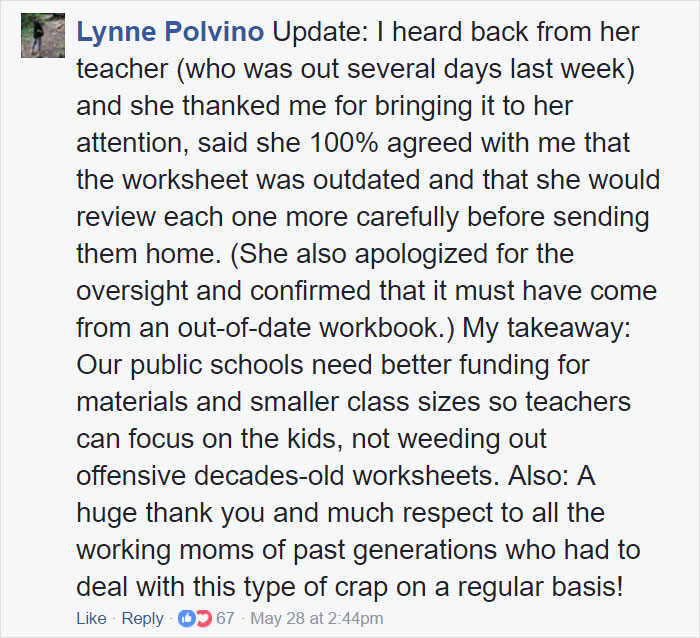 Lynne later revealed that her daughter's teacher had thanked her for bringing the issue to her attention.

The teacher said she agreed that the worksheet was outdated, and that she would review her pupils' homework more carefully in the future.

Lynne added: "Also: A huge thank you and much respect to all the working mums of past generations who had to deal with this type of crap on a regular basis!"

Meanwhile, a mum has designed a T-shirt for her autistic son so people will stop telling him to "shut up" and calling him "naughty".

Sainsbury's has launched summer holiday childcare for just £7.50 a day and it includes lunch.

And this mum-of-two only shops for her children's clothes twice a year because of her genius "capsule wardrobe" tip.